In the sociological research, it is customary to relate to five main cleavage that threaten the unity of Israeli society: political, religious (the tradition axis), class (economic), national (Jewish-Arab relations), and ethnic.1 In recent years, the research has indicated that the ethnic divide is losing salience.2 Accordingly, this index relates to four polarizing factors.

The spectrum of views in the Israeli political space moves along a right – left axis. Israel’s multi-party system has created clearly defined parties at both ends, while at the same time allowing for the existence of centrist parties (ideologically and in terms of their willingness to join with other parties from both sides).

In examining the results of Knesset elections in recent years and by dividing parties along the political spectrum into the right (Likud, Israel Beiteinu, Yamina, Jewish Home, and the National Union); the left (Labor, Meretz, the Arab parties) and others, we see a broadening trend on the right and a narrowing one on the left (Graph 1). 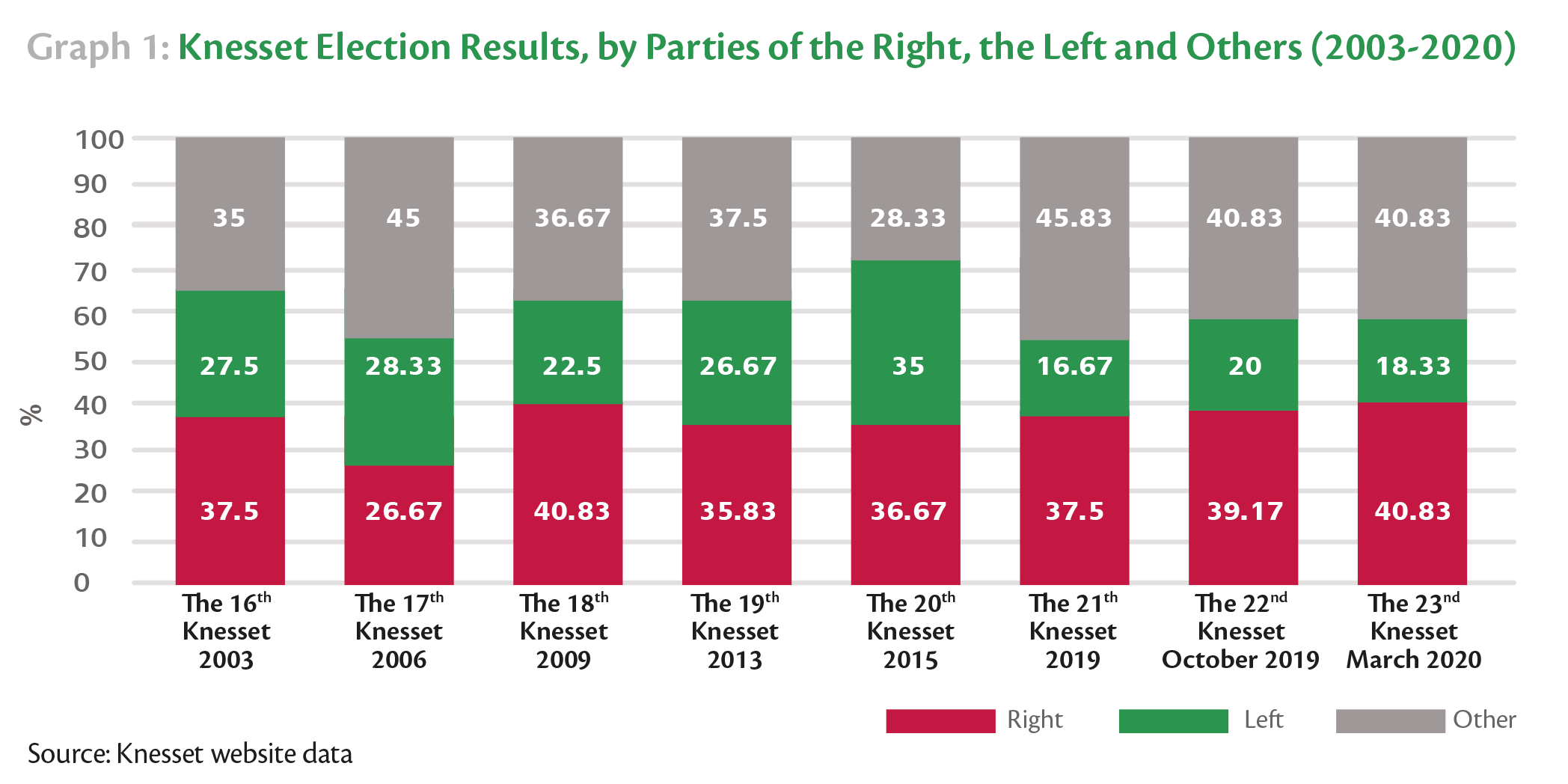 Parties unaffiliated ideologically with one side or the other have garnered a larger share of Knesset seats compared to the past (in the last three elections, the centrist Blue and White party received 35, 33 and 33 seats, while Likud won 35, 32 and 36 respectively).

The 2016 Pew survey of Israeli society divides the political arena into three groups: right, left, and center. According to the survey’s data, most of Israel’s Jewish population place themselves in the center (55 percent of the wider Israeli Jewish population, and 62 percent of the secular population), 8 percent self-identify as supporters of the left, and 37 percent self-identify as supporting the right.3

In JPPI surveys, five categories are delineated: left, center-left, center, center-right, and right. Spreading these categories out along the ideological spectrum sharpens the intensity of identification with the right (33.5 percent self-identify as on the right, 26 percent as center-right), which has grown mainly at the expense of the center bloc (24.5 percent); 11.1 percent define themselves as center-left, and 5 percent as left.

Israel Democracy Institute (IDI) polls examining political affiliation also offer a scale of five camps: right, moderate right, center, moderate left, and left. As with the JPPI and Pew surveys, the right-wing group is the largest, with the center parties following (Graph 2). In both five-category surveys, decisions over whether to add the intermediate groups to the center or to the parties at the ends of the spectrum set the general impression of the state of polarization. Either way, taken as a whole, the surveys show that Israelis are not strictly divided between two ideologically polarized groups.

The data show that there are gaps in affiliation between Israeli groups but that most of the population is in the center. As for trends, while gaps in election results are narrowing, public opinion polls show that the gaps widened in 2019, though the trend that emerges is mixed.

The data indicate a close link between political outlook and observing tradition. Secular Israelis vote at higher rates for Blue and White, traditional and religious Israelis vote at relatively higher rates for Likud, and the ultra-orthodox (Haredim) cast their votes for Shas or United Torah Judaism. These rates have intensified in most of the sectors over the past three elections.

Israel’s population is estimated (December 31, 2019) at 9.136 million, of whom 74.1 percent are Jews (approx. 6.772 million), 21 percent are Arabs (1.916 million), and 4.9 percent “others” (approx. 448,000).4 Among Jews, the accepted division is according to the scale of tradition observance, from secular to Haredi. According to data from Israel’s Central Bureau of Statistics (CBS), 10 percent of Jews define themselves as Haredi; 11 percent as religious; 13 percent traditional-religious; 22 percent as traditional/not that religious; and 43 percent as not religious/secular.5 Positioning along the continuum reflects views on different topics, and effectively becomes an confounding variable of polarization.

JPPI’s annual pluralism survey asks respondent to rank the image of various sectors of Israeli society, which allows us to study the quality of relations between sectors as well as how each is perceived by the others. Specifically, it examines how different groups consider the contributions that other groups make to the success of Israel. Two groups receive the lowest score every year: Arabs and Haredim.

Graphs 3 and 4 describe how the contributions of the two groups at the ends of the religious spectrum – secular Jews and Haredim – are rated by other groups. While it is clear that every group tends to think that its own contribution to society is high, what is interesting is the gap between groups. Gaps in perceptions of the contribution of the secular group are small. Haredim value the secular contribution less than other groups but still rates it high. In contrast, secular assessments of the Haredi contribution are very low. These gaps indicate polarization that finds expression, among other things, in political struggles over issues of religion-state balance in Israel, which is mainly perceived as a struggle between Haredim and the rest of the population. 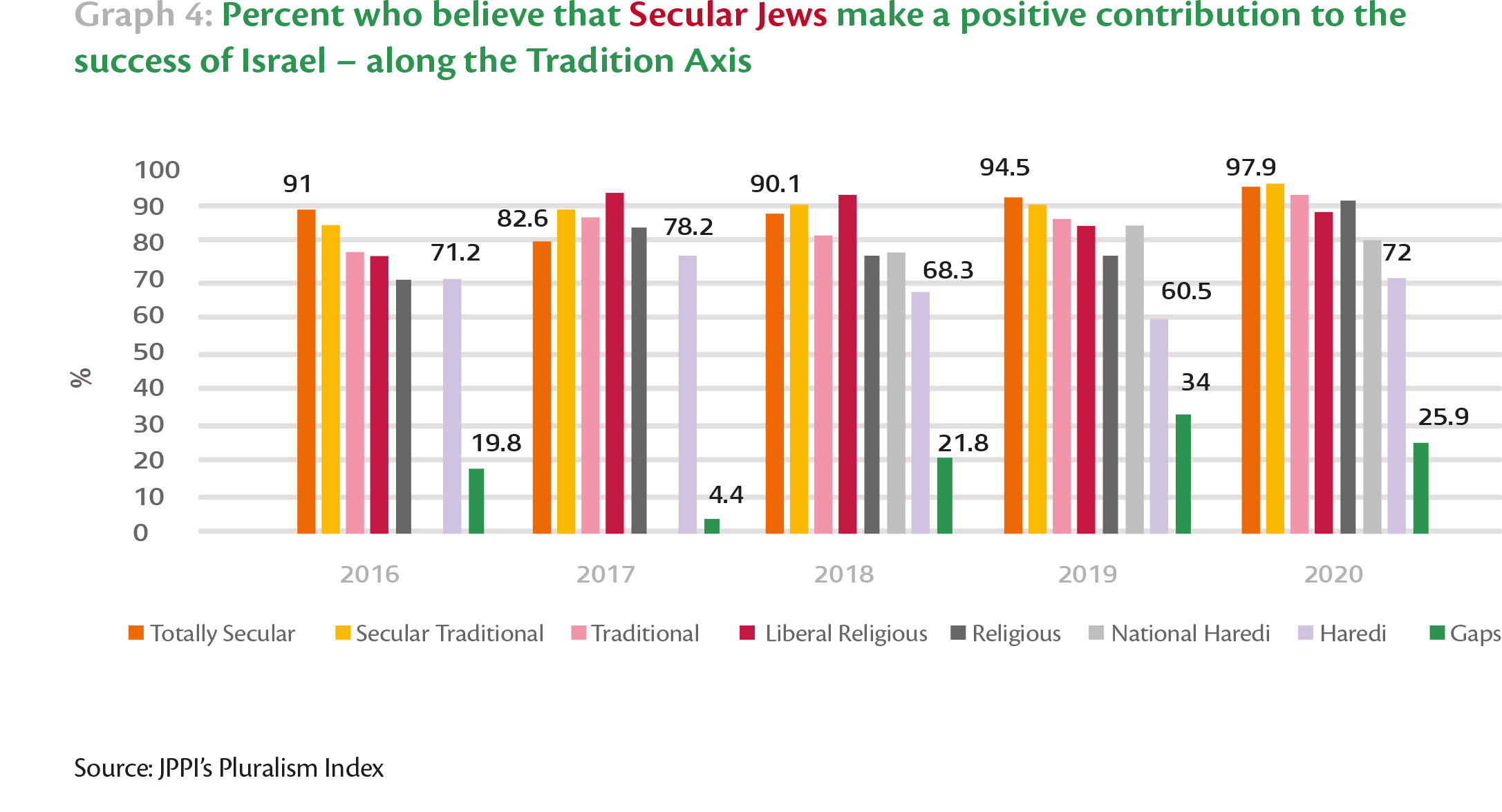 JPPI’s 2016 Annual Assessment addressed at length two population sectors living side-by-side: the “Startup Nation” and the “Stagnation Nation.” One has jobs and steady incomes, the other lacks employment security and sometimes has to fight for its basic rights.6 Studies indicate that economic inequality exacts a social price, even if it has little impact on economic growth.

The Gini Index is the internationally accepted instrument for measuring income gaps and income inequality between different population sectors within a country. The index’s values range from 0 (equality) to 1 (inequality). After reaching a record high in 2006, we have seen – over an extended period – a downward trend, i.e. reduced inequality and narrower economic gaps between Israeli population sectors.

At a 2019 conference, the Governor of the Bank of Israel explained that notwithstanding the encouraging numbers, the level of inequality in Israel is high relative to other developed countries (the Gini Index stood at 0.34 in Israel, compared to an average of 0.32 among OECD countries, which puts it on the list of the ten countries with the highest inequality).7

Another instrument for measuring economic inequality in Israel is the Poverty Severity Index, which utilizes National Insurance Institute data to determine poverty rates and collective proximity to the poverty line. The Poverty Severity Index also shows that in recent years there has been a downward trend in Israeli poverty rates. In 2018, the severity of poverty in Israel declined by 5 percent to 33.3 percent. The indices have been fluctuating since 2012, but the overall trend indicates a decline.8 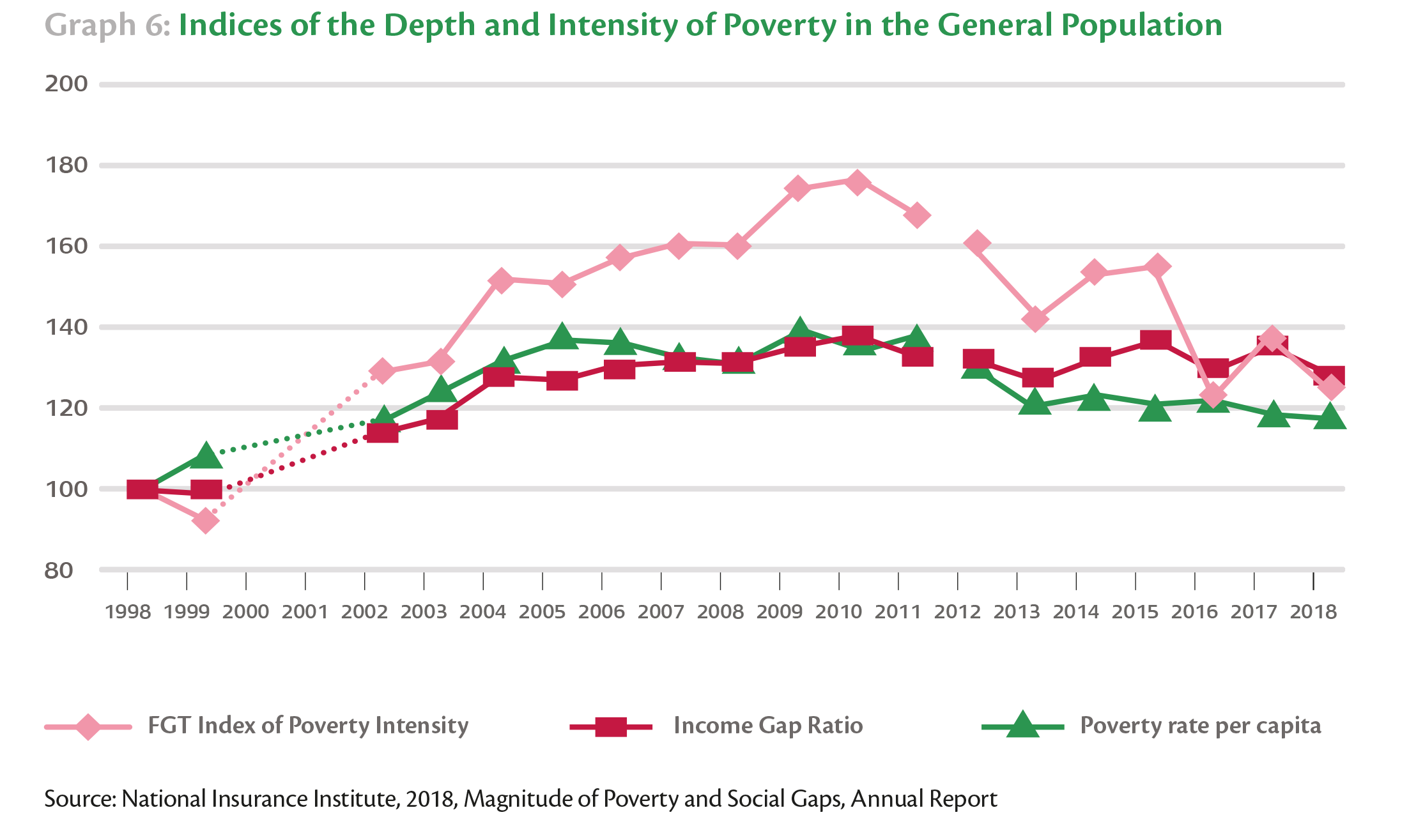 In examining the relationship between Jews and Arabs in Israel, we focus on two variables: the extent to which individuals feel part of the general population; and the extent to which each sector perceives members of the other group as politically extreme. JPPI’s pluralism surveys look at how comfortable people feel living in Israel. The proportion of those answering “very comfortable” plus “fairly comfortable” is very high, both among Jews (89 percent in 2020) and among Arabs (85 percent in 2020). 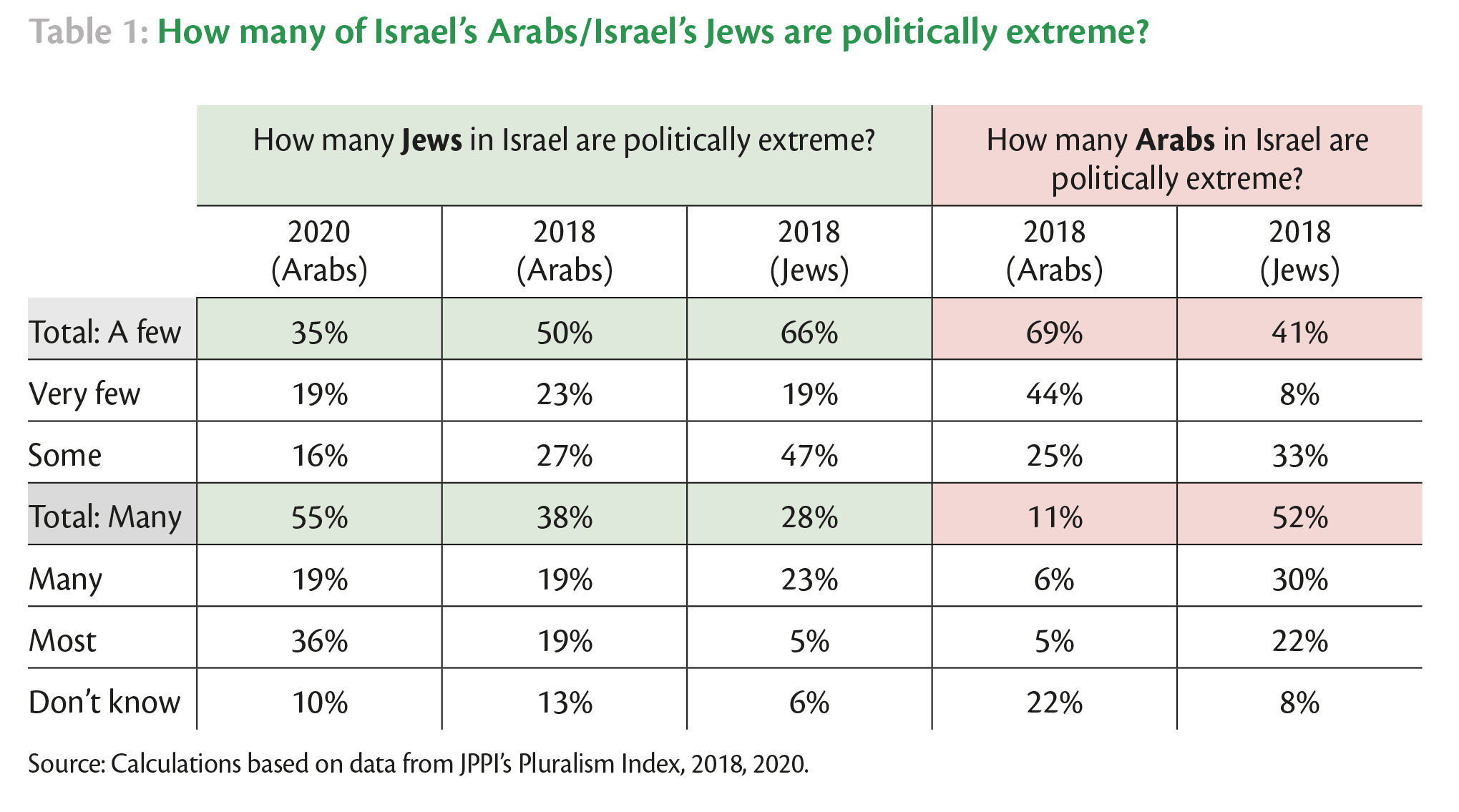 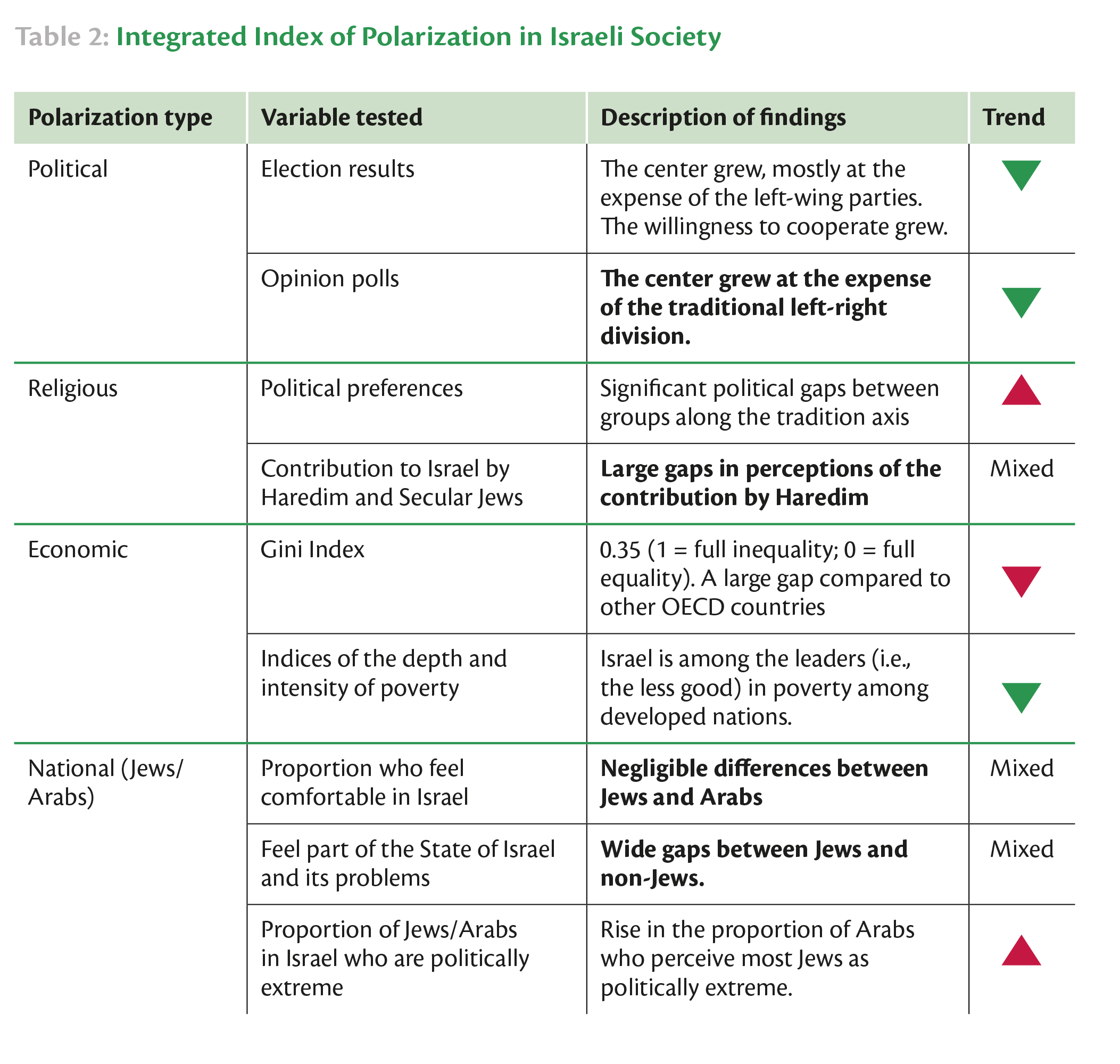