For several years, Israel has had trouble maintaining a stable government. This reality threatens to erode Israeli national resilience and the deterrence it projects to its enemies. This year witnessed a fourth round of elections within two years, which produced a new coalition and a new government that differs significantly from its predecessors, but rests on a small and unstable Knesset majority. At this point, it is difficult to predict how long this government will be able to withstand the prevailing Israeli reality, but it is worth looking at the innovations and challenges that accompanied its establishment along several axes.

The personal axis: partnership based on a common opponent. Opposition to Benjamin Netanyahu remaining prime minister after about a dozen years in office was the chief glue of the new government. During the latest round of elections, various parties announced that they would not sit in a coalition with Netanyahu as prime minister – whether because Netanyahu is facing criminal charges, or because their members felt that his tenure had gone on for too long, or because they thought that the prime minister had adopted a political culture of division, or because they felt that Netanyahu had prioritized his personal survival over the good of the nation. Without getting into the validity of these claims, the fact is that they led a significant number of parties and Knesset members to conclude that Israel would be better off with instability and additional rounds of elections than with Netanyahu’s continued premiership. Moreover, after the fourth round of elections, the anti-Netanyahu arguments led a sufficient number of parties to acknowledge that it would be better to form a coalition with ideological adversaries than to prolong the existing situation of a Likud-led government under Netanyahu.

The ideological axis: a perpetual exercise in compromise. In recent years, a polarized Israeli political discourse has led a number of parties, primarily but not solely on the right of the political map, to delegitimize other parties as partners, for ideological reasons. It is, of course, clear to begin with that a coalition made up of parties with no ideological consensus is a complex undertaking. But there is a difference between preferring a relatively homogeneous coalition and absolutely rejecting the idea of broadening the tent when necessary. The new government essentially represents an after-the-fact retreat from past delegitimizations, and an aspiration to partnership between ideological adversaries, in circumstances where concession and compromise are constantly required, and the demands of all coalition members must be taken into account. Thus, certain staunchly right-wing parties were forced to accept their failure to pass an extension of the Citizenship Law, which they view as a cornerstone of Israeli immigration policy, while parties that vehemently opposed that law sought to help pass it in a context of agreed-upon concessions. At least during these early months of the coalition, all of its members seem to be making a serious effort to maintain harmonious relations, and not allow ideological differences to dismantle the partnership. However, these differences have not disappeared, and could potentially add yet another challenge to those facing the government, while frequently casting doubt on the government’s ability to survive crises.

The Haredi axis: (temporary?) exclusion from power. Haredi relations with Israel’s non-Haredi majority are marked by constant tensions that now appear to be on the rise (see also the Israeli Society Index, page 85). These tensions stem from disagreement on fundamental matters of state culture, from the non-Haredi majority’s disapproval of the sparse Haredi contribution to the nation’s economy, and from the fact that the Haredim generally do not serve in the IDF. The coronavirus pandemic brought another source of tension – the refusal of Haredi subgroups to abide by the governmental health directives. Tension also resulted this year from the Mount Meron disaster on Lag B’Omer, in which over 40 people were killed due to failed management of the site, which attracts hundreds of thousands of Haredim each year. Despite the large visitor numbers, Mount Meron had been subject to a kind of administrative autonomy in which the government and the police had trouble regulating activity at the site. A state commission of inquiry was appointed to investigate the disaster; the commission’s deliberations will undoubtedly compound the already-existing tensions.

To all of the above one may, of course, add the Haredi sector’s continued rise in population share, an outcome of high birth and retention rates. This demographic trend, which was also noted in this year’s regular reports on Jerusalem’s population makeup, creates a sense of urgency within the political echelon regarding the need to address the Haredi challenge. The new government, which was formed without the Haredi parties, appears to be treating the sector as a potential source of inter-party tension. For some, changing the rules of the game with respect to the Haredi sector is a top priority, which requires the use of governmental power – while others want to engage the Haredim in dialogue with a view toward more gradual change, without crises. The finance minister’s July 2021 initiative to significantly cut child allowances for yeshiva students sparked intra-coalition tensions on this score, while re-introducing the topic of how Israel should cope with the challenge of a growing Haredi sector.

The Arab axis: active partnership. The change in dynamics of the political relations between Jews and Arabs in Israel is the most fascinating aspect of the recent rounds of elections and, perhaps, of greatest importance for the long term. The outcome of that changed dynamic was the formation of a government that depends on the votes of four Arab Knesset members belonging to the Islamic Movement – for the first time in the State of Israel’s history. The inclusion of an Arab party in the ruling coalition (and the fact that even the Likud negotiated with the Ra’am party in an attempt to bring it into a different coalition) effectively shattered a glass ceiling that had made Jewish-Arab governmental partnership very difficult to achieve, politically and attitudinally. This development appears to have driven a consciousness change both among Jews who had been accustomed to seeing Arab parties as illegitimate partners in governance, and among Arab Israelis whose representatives have until now preferred to operate on the fringes of the political arena.

However, this development also carries a measure of risk, which has already manifested in several crises during the coalition’s early weeks. The reservations of Ra’am members prevented the extension of the Citizenship Law. Some expressed themselves in a way that raises questions about what would happen should Israel need to take security measures in Gaza. Statements by the head of the movement about the presence of Jews on the Temple Mount sparked controversy as well. As budgets and powers are transferred to the party, the opposition will certainly try to frame actions taken by Ra’am leaders in a way that could turn large swaths of the public against the party and against the coalition in which it participates (especially actions pertaining to the regulation of Bedouin settlement in the Negev). In other words: Ra’am’s coalition membership could potentially demonstrate that Jewish-Arab partnership in the political arena is possible and beneficial to all those involved, but it could also ignite crisis and prove the prescience of those who hold that such a partnership, though meant to bridge wide gaps in how the vision of an Israeli state may be understood, is unfeasible. 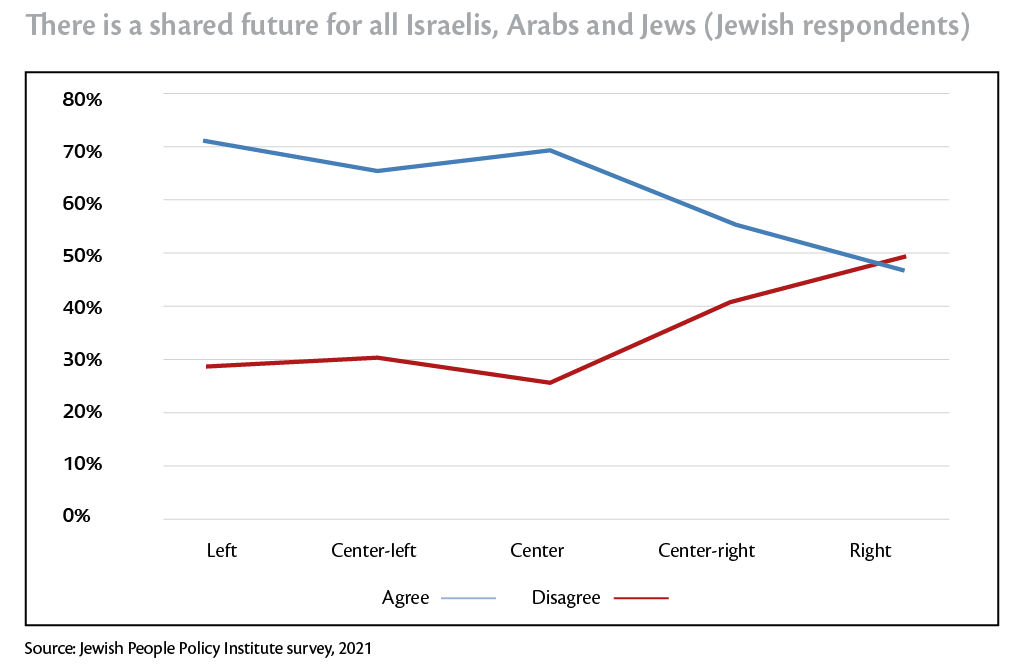