During the period between November 2019 and July 2020 the Pew Research Center conducted a survey of the American Jewish population. Among other things, the survey offers a glimpse of current US Jewish demographics, including population size, geographic distribution, and educational and economic attainment. These characteristics can be compared with those of the American population as a whole. During the period in question, the Pew Research Center separately interviewed a large number of US citizens, including a sample of Jews, about how they were coping with the coronavirus pandemic. These two topics are the focus of the index presented here. Our concluding remarks address demography and COVID-19 from a global Jewish perspective, noting implications for future research.

Population size
The new Pew survey found that, in 2020, there were 7.5 million people in the US who self-identified as Jewish. Three-quarters of them identify as Jews by religion, while another quarter identify as Jewish ethnically, culturally, or by ancestry.1 We believe that 200,000 children of dual religious identity (Jewish and other) should be subtracted from this figure, making for an estimated 7.3 million Jews (Graph 1, Track 1). 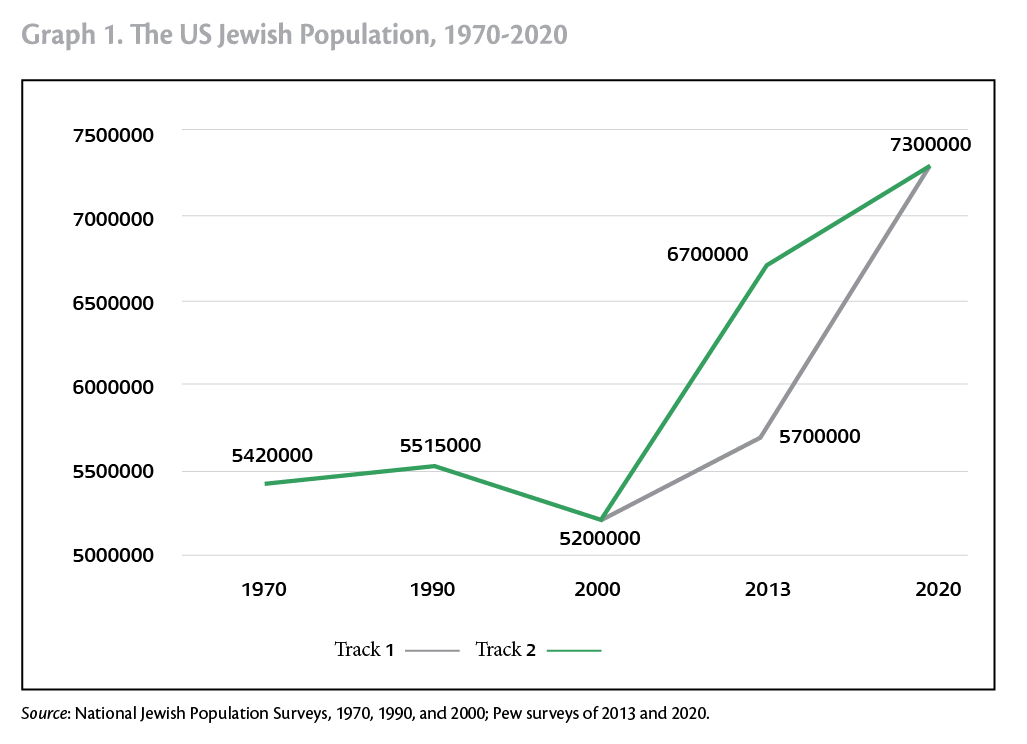 The previous Pew survey of American Jewry was conducted in 2013. This survey arrived at an estimated Jewish population of 5.7 million (per self-identification), with another million identifying as “partially” Jewish (with no other religious identity). Some argued at the time that these partial Jews should be included in the total US Jewish population, bringing it to 6.7 million (Graph 1, Track 2). The 2020 survey did not allow respondents a “partially” Jewish option; the only options were Jewish or not Jewish. We assume that many of those who in 2013 chose the partly Jewish option defined themselves as Jewish in the 2020 survey. The rest of the increase in the American Jewish population estimate can be attributed to differences in data-gathering methodologies (a phone survey in 2013 versus a combination of web and mail questionnaires in 2020), but also to several developments relating to demography and identity definition: (1) an increase in the share of Orthodox Jews, especially Haredi or ultra-Orthodox Jews, whose birthrate is high; (2) an “echo effect” of a relatively large number of grandchildren of baby boomers entering the marriage and childbearing life stages; (3) growth in the share of mixed-couple offspring who are Jews; (4) and the addition of people of color to the ranks of American Jewry, including Blacks, Hispanics, Asians, and mixed-race Americans; these latter Jews account for 8% of all US Jews.

We are aware that the new estimate attests to a substantial increase compared with late-20th century estimates. Only a small amount of this growth can be explained by births and a positive net migration rate (mainly from the FSU and Israel). Furthermore, it reflects changes in group identity, and in the degree of confidence with which people identify as Jews in the United States today. Sometimes, a growing number of antisemitic incidents can reinforce the desire to openly identify as Jewish.

It is worth noting that even those who favor a more restrictive definition of “Jewish” would have to agree that, in a departure from past assumptions, the number of US Jews is not declining or eroding, but rising. Professor Sergio DellaPergola, for instance, who holds that “Jews of no religion” should be included in the core American Jewish population only if they have two Jewish parents, reaches a US Jewish population estimate of 6 million.2 Essentially, since 1970, from one survey to the next (except for the 2000 survey, which suffered from major methodological problems), the number of US Jews has been rising.

It is also interesting to consider what the number of US Jews would be according to Halacha, or Jewish law, i.e., those born to Jewish mothers. This definition would apply to 87% of adult US Jews by religion, and to 70% of Jews of no religion – i.e., 4.8 million people. But apart from these, there are another 1.3 million Americans who do not identify as Jews but whose mothers are Jewish, making for a total of 6.1 million Americans who meet the halachic criteria for belonging to the Jewish people. This figure is 300,000 higher than the estimated number of adults (age 18 and over) who self-reported as Jews (regardless of their mothers’ religion of origin). At this stage, lacking access to the database, we cannot determine the number of children in the US whose mothers are Jewish; however, we believe that, given the rise in mixed marriages among Jewish women in recent years, the number of such children is not substantially different from the number of children whose parents reported them as being Jewish. Thus, the total US Jewish population, halachically defined, is 7.5 million.
Recognizing the validity of this relatively high number means being prepared to supply community services of various kinds to a growing population. Even some of those whose Jewish identity is dubious may be interested in what Jewish organizations and institutions have to offer, including educational, cultural, and social services. Moreover, the Jewish community, at the national and especially local levels, should be prepared to welcome a greater diversity of members than ever before.

Geographic distribution
American Jews are not spread uniformly across the continent. The number of Jews in the various states and regions is determined by internal migration, immigrant destinations within the US, differential natural increase influenced by denominational affiliation (mainly Orthodox as opposed to non-Orthodox), and assimilation rates. After the share of Jews in the more established Northeastern and Mid-Atlantic communities declined in favor of Sun Belt localities in the South and West, recent years have witnessed a more moderate continuation of the trend. Currently, American Jews are almost equally distributed between the Northeast/Mid-Atlantic (48%) and the South and West (52%). Although the largest share of Jews resides in such Northeastern/Mid-Atlantic states as New York and New Jersey, Massachusetts, and Pennsylvania, the gap between those states and both the southern and western regions is small (Table 1).

US Jews can be found in large numbers in many different regions and states. This split is making it necessary for major organizations, institutions, and services to reorganize geographically. At the same time, a large presence across a large geographic expanse ensures Jewish vitality and cohesion, even in places where educational, cultural, and religious activities were once hard to find.

It should also be noted that the recent dispersion of Jews across the continent resembles the overall population distribution more than ever before (Table 1). It attests to the Jews’ successful integration in the general American society.

Educational and economic attainments
Educational attainment is a salient feature of social success. The composition of the Jewish population has changed over the past few decades: older people with limited schooling have passed away, and their place has been taken by young high school graduates who have gone on to institutions of higher education. In the past five decades there has been a major decline in the share of Jews with a high school education or less, while the share of academic degree holders has climbed – including Jews with advanced or professional degrees, e.g., law degrees (Table 2). At present, six out of ten American Jews hold academic degrees. It appears, however, that the Jews have exhausted their educational potential; the past two decades have seen almost no change in their educational status, while the American population as a whole has displayed a significant increase in the pursuit of higher education. Thus, the Jewish advantage in this sphere has grown smaller (though it is still quite marked). 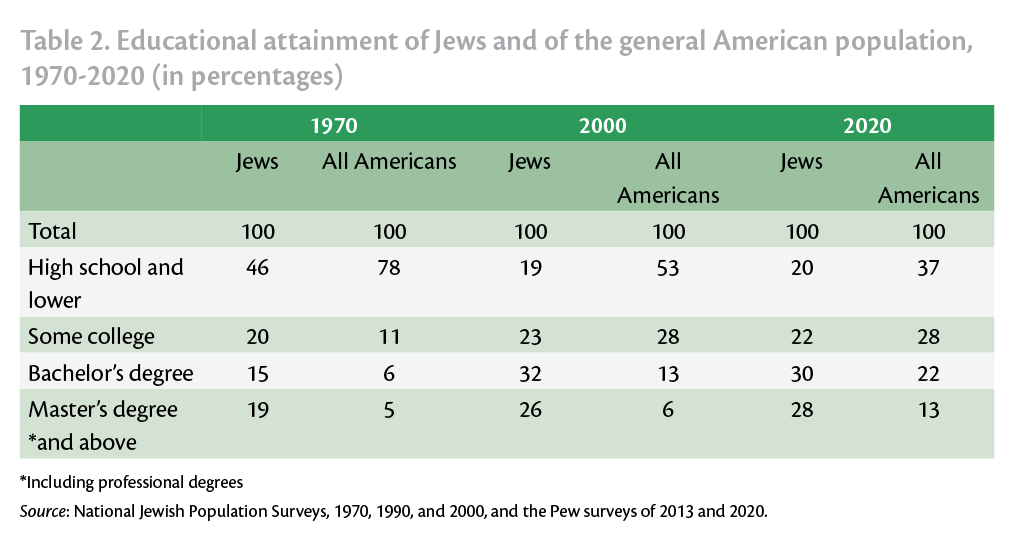 Data not shown here indicate that American Jews also enjoy high incomes. A quarter live in households with annual incomes of over $200,000, compared with just 4% of Americans in general. More than half of US Jews live in households with annual incomes of $100,000 or more, compared with a fifth of the American population as a whole. At the opposite end of the income scale, only 10% of Jews have household incomes of $30,000 per year or less, compared with a quarter of other Americans. It should be noted that Conservative and Reform Jews are more strongly concentrated in the higher income brackets than are Orthodox Jews.3