Among Israeli Jews, there is a near-total consensus on a general vision for Israel as the embodiment of “a Jewish and democratic state.” When we break this general vision down into its component parts, we can see many points of consensus about how the vision should be realized, along with quite a few disagreements. Furthermore, many Israelis express contradictory desires with regard to this vision when answering various questions. That is, the vision is not entirely a matter of consensus, and even where there is broad agreement it is not always consistent. For example: a large majority of Jews (84%) and of Arabs (90%) agree that in a democratic state there should be no discrimination against any group. But when Jews are asked about the Jewishness of the state, about four in ten say there should be legal preference for Jews over non-Jews (38%), which is seemingly at odds with not discriminating against minority groups.

In fact, Israel’s Jewish majority arrives much more readily at a decisive consensus about what the country’s main “democratic” features should be, than about what its “Jewish” characteristics should be. Regarding democratic attributes, there is not much disagreement between Jews and non-Jews (primarily Muslim Arabs). Nearly everyone affirms that democracy means majority rule, prohibiting discrimination, and protecting human rights. The main dispute between Jews and Arabs over the question of democracy concerns implementation. Most Jews (51%) feel that Israel already meets the requirements of a democratic state. By contrast, a third of Arab Israelis currently believe that Israel is not democratic, while another third feel that it is not democratic enough. Half of Israeli Jews want Israel to be more democratic (even if they think that the state already is democratic). Among Arabs, a decisive majority maintain that Israel needs to be “more democratic” (78%). 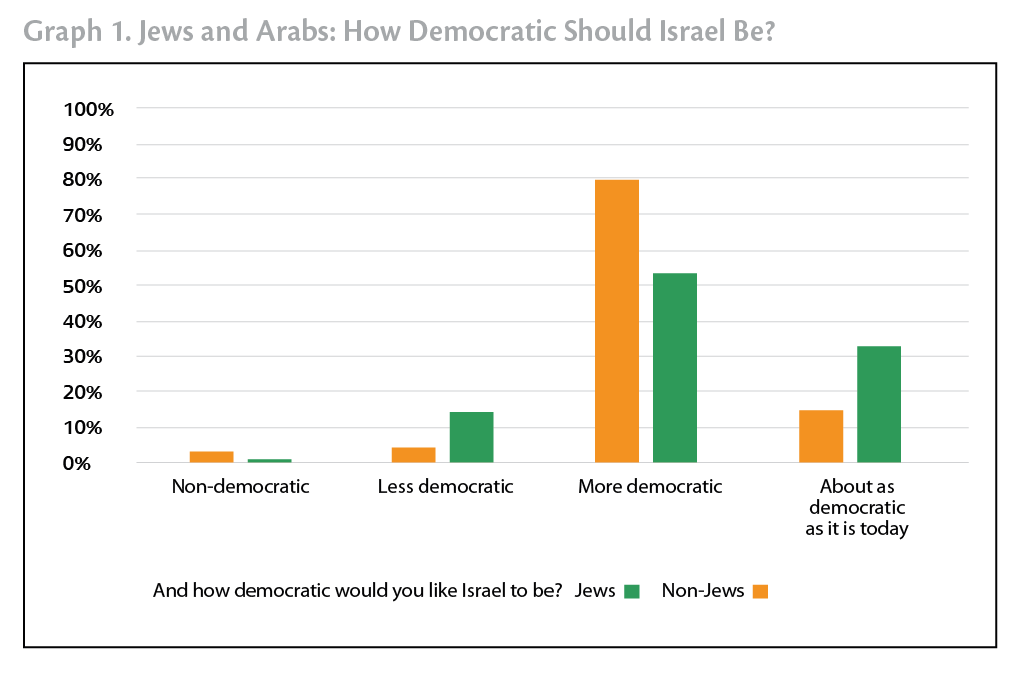 When proceeding to questions about the Jewishness of the state, an attribute in which Arabs generally have no interest, gaps appear in the vision, with the sole areas of near-total consensus among Jews being the need for a Jewish majority (88%) and encouraging Jewish creativity and culture (74%). Elements such as mitzvah observance, or law based on Halacha, receive very little support, most of it coming from Haredim and, to some degree, from the non-Haredi religious [dati] public. As noted, a significant percentage of Jews expect a Jewish state to give legal preference to Jews (though the majority do not accept this position). The bottom line is that while most Jews see Israel as a democratic state and want it to be as or more democratic than it is today, their attitude toward the Jewish state ideal is more ambivalent. The share of Jews who feel that Israel is already a Jewish state is high (59%), while the percentage of those who want Israel to maintain its present level of Jewishness is quite similar to the percentage who want the state to be as democratic as it currently is (39% versus 33%). However, there is a significant group, about a quarter of the Jewish population, who want Israel to be “less Jewish” than it is today, as well as an even higher share (37%) who would like the state to be “more Jewish” than it is at present. 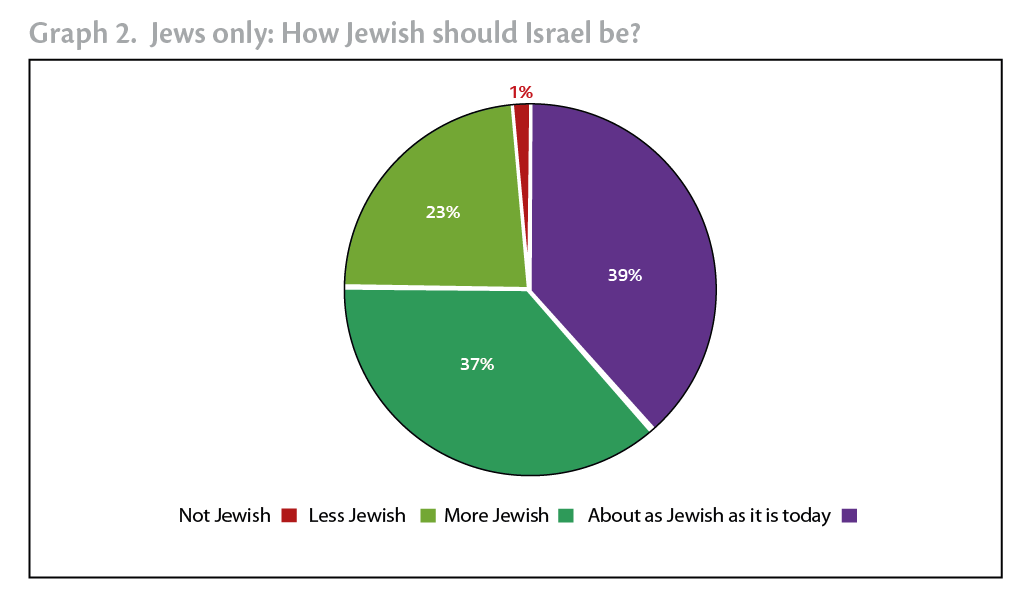