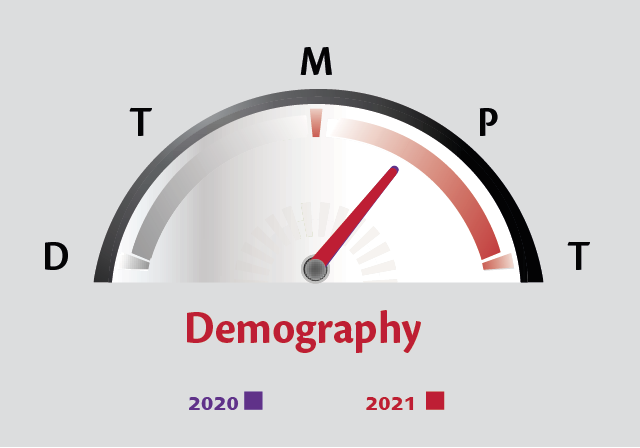 The past year was defined by the COVID-19 pandemic. This crisis period will likely have long-term ramifications with regard to family planning, childbearing, and migration. A new survey of US Jewry arrived at a larger population estimate than in the past (the figures are disputed).

We have left the Jewish Demography gauge unchanged.

There are over seven million Jews in the US, but the numbers are subject to interpretation.
Explanation: The Pew Research Center determined, through a comprehensive survey, that there are currently some 7.5 million people in the US who identify as Jews, most of them “by religion,” with a quarter identifying as “Jews of no religion.”1 JPPI holds that 200,000 children of dual identity (Jewish + another religion) should be subtracted from this figure, for an estimated US Jewish population of 7.3 million. A more conservative estimate, which excludes “Jews of no religion” who have only one Jewish parent, would bring the total down to six million.2 The new US Jewish population estimate indicates substantial growth compared with the estimates of the late 20th century. It primarily reflects shifts in group identity and a sense of security in identifying as a Jew in contemporary America. The estimate indicates that, in contrast to what we previously thought, the American Jewish population is not declining or eroding; it is expanding. The population increases in Israel and the US, the world’s two largest Jewish communities, affect the estimated population size of world Jewry, bringing it to 16.5 million.

A more conservative estimate would put the global Jewish population at 15.2 million.

The criteria of the Law of Return, as well as the Law’s implications for the character of today’s aliyah, must be re-examined.
Explanation: Half of today’s olim come from the former Soviet Union, especially Russia and Ukraine. Over two-thirds of those immigrating to Israel are eligible for Aliyah under the Law of Return are not halachically Jewish. This being the case, and in light of other cultural and demographic developments underway in the Jewish world, JPPI reaffirms its recommendation that the criteria of the Law of Return, which currently allows the adult grandchildren of Jews to enter Israel, be reassessed. The current ideologically diverse government, which represents a range of positions and approaches, is actually well-positioned to reach a consensus-based, non-polarizing outcome – the kind of outcome best-suited to the present situation.

Israel should re-examine and improve its methods of encouraging Aliyah.
Explanation: Over the past year, against the background of the COVID-19 pandemic, Aliyah to Israel dropped precipitously.3

Twenty thousand olim arrived in Israel in 2020, compared with 33,000 the previous year – a decline of 40%. This occurred despite optimistic forecasts for a wave of Jewish immigration spurred by growing antisemitism and drawn by the appeal of Israel’s economy. In light of this, a comprehensive examination of ways to encourage Aliyah and improve absorption methods would seem to be in order.

1 Pew Research Center. 2021. Jewish Americans in 2020. Washington, D.C.
2 This is the estimate of the demographer Sergio DellaPergola, which also appears as a reference in the Pew study itself.
3 The data for Israel are based on various publications of the Central Bureau of Statistics, in particular the Statistical Abstract of Israel and the Monthly Bulletin of Statistics.
Previous
Next