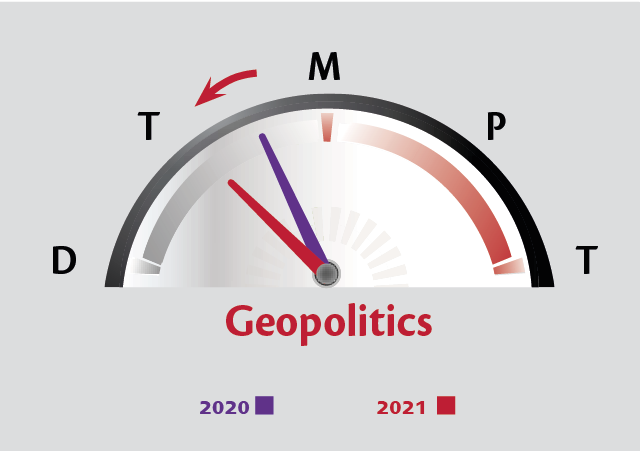 The geopolitical environment Israel navigates is affected by both the change of US presidents and the change of government in Jerusalem. Israel may find itself harmed by measures taken by the new US President, Joe Biden, both those reflecting divergence from Donald Trump’s foreign policy, (relating particularly to the Iranian and Palestinian issues, the international order, and international institutions), and those that perpetuate Trump’s foreign policy approach (prioritization of domestic issues, aversion to military engagement, reduced presence in the Middle East). In the Iranian arena, Israel faces a thorny dilemma: how to deflect the nuclear threat without slipping into a crisis with Washington. Deepening political polarization, and a growing tendency in the Democratic Party’s progressive wing to criticize Israel and refrain from supporting it, pose a challenge to American Jews and to Israel. Escalating tension between the great powers (the US vis-à-vis China and Russia) sharpen Israeli dilemmas and may drag it into the role of pawn in an inter-power conflict. At the same time, economic and political crises, against the backdrop of the COVID-19 pandemic, have caused instability and problems of governance in many Middle Eastern countries, and exposed them to the danger of descending into violence. To sum up, despite the historic achievement of last year’s Abraham Accords, there has been no turning point that promises a solution to the fundamental strategic problems facing Israel: the security threats (Iran, Hezbollah, Hamas, Syria) and failure to resolve the Palestinian issue.

Based on the above, we have moved the Geopolitics gauge needle in a negative direction.

Preserving the relationship with the US (and with American Jewry) should be a supreme objective, one entailing scrupulous management, integration, focus, and coordination between Israel’s governmental systems.

Explanation: The changes in US foreign policy ushered in by the new president pose significant challenges for Israel. The overwhelming importance to Israel of its relationship with the US and with American Jewry makes it essential that the Israeli government manage its disagreements with the Biden administration in a cautious, respectful, and intelligent way. Israel must reach understandings with the US while avoiding a crisis. Most of the geopolitical analysis presented herein relates to this issue.

Explanation: A problematic trend underscored by the recent confrontation with Hamas is the erosion of American bipartisan support for Israel. This development, which has emerged against the background of deepening internal American polarization, constitutes a strategic risk for Israel and the Jewish people (all the more so as it has been accompanied by a surge in antisemitic incidents). The intensification of anti-Israel sentiment in Congress, and the pressure exerted on the president by the progressive wing of the Democratic Party to harden his stance regarding Israel on various issues, should not be ignored. The fact that 70% of US Jews support the Democratic Party, and a portion of them agree with some of the criticism directed at the Israeli government, and that a trend of alienation from the Zionist enterprise among some the younger generation of Jews – increasingly threaten the resilience of the strategic triangular relationship: Jerusalem-Washington-American Jewry.

Measures that would spark Palestinian unrest should be avoided where possible, and efforts should be made toward constructive dialogue with the Palestinian Authority.
Explanation: President Biden has renewed talks with Abu Mazen, restored aid to the Palestinian Authority, and announced his intention to reopen the consulate in Jerusalem that had formerly coordinated US ties with the PA (President Trump had closed the consulate). The prevailing view is that Biden will not push for the rapid achievement of a permanent agreement, as he does not believe the sides are ripe for that, but he is definitely expected to step up demands that Israel improve its treatment of the Palestinians and refrain from creating facts on the ground that would hamper future implementation of the two-state solution (i.e., establishing settlements beyond the settlement blocs adjacent to the 1967 borders, or actions in East Jerusalem that would be deemed provocative).