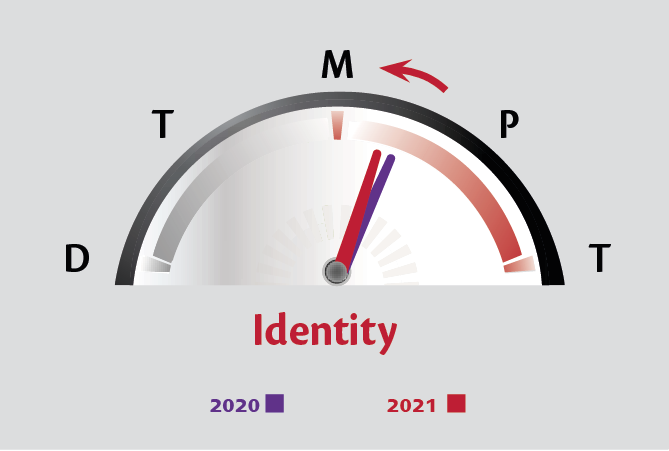 The pandemic affected Jews’ engagement with community activities this year. It lowered the level of physical involvement, while driving an increase in the digital supply of Jewish cultural offerings, though without significantly enlarging the circle of participants. It will take more time to determine whether, and to what degree, Jews will return to their earlier activity pattern once the pandemic has ended. It also became clear this year, from new data on American Jews, that within the younger generation there is a gap between those whose identity has a strong practical dimension (primarily in the Orthodox-Haredi community), and a rapidly growing population of “Jews of no religion” whose practical affiliation is much weaker.
Based on the above, we have slightly moved the Identity and Identification gauge needle in a negative direction.

Jewish organizations (and the Israeli government) should monitor signs of a trend toward the “Europeanization” of antisemitism in the United States.
Explanation: In order for antisemitism in North America to be monitored in a systematic and integrative way, an effort must be made to identify trends that have contributed to the marginalization of European Jewish communities. This year, JPPI has been calling attention to problematic European trends of the past few decades that can now be discerned, though at lower intensity, in the United States. It is necessary to assess the relevance of each of these trends as a metric of potential communal decline, adapt each of them to the American context, and establish a basis for determining their direction and pace. This effort will have technical components (monitoring, data mining, and the like), but first there must be agreement on definitions so that measurements taken in different places can be compared.

The Israeli government should entrust the response to antisemitism to a single integrative body with powers and implementation capabilities.
Explanation: A rise in antisemitic incidents was recorded this year in many places around the world, including the United States. The situation requires Israel to increase its involvement in dealing with the phenomenon and to establish a governmental authority with the appropriate tools for multidisciplinary action. In addition to monitoring antisemitism levels and assessing the nature of the threat, the authority would develop uniform indicators for evaluating the phenomenon in the various arenas in which it manifests. Per its assessment, the authority would set comprehensive policy, launch action initiatives (vis-à-vis governments, Jewish communities, and other relevant entities), coordinate their implementation with the parties involved, and monitor their efficacy. The authority would advance projects in the spheres of education, law/legislation, diplomacy, public relations, new media, Jewish community security, and more.

The new government should encourage initiatives that foster the development of a non-religious Jewish identity.
Explanation: Data collected this year by JPPI indicate that a large majority of Israeli Jews want Israel to be a “Jewish state.” However, only a minority of them feel that Israel should remain “as Jewish as it is today,” while the majority want Israel to be “more Jewish” (37%) or “less Jewish” (23%). The data show that those at the secular end of the spectrum tend to want a “less Jewish” state, while the traditionalist to religious/Haredi end of the spectrum desire a “more Jewish” state. As we understand it, this situation stems from an identification of the state’s Jewishness with religiosity, which both drives polarization and undermines the (not-religion-based) sense of Jewish commonality shared by all Israeli Jews. In an era when religious practice and belief can no longer serve as an “identity glue” for the entire Jewish public, broad-consensus initiatives to strengthen non-religion-based elements of Jewish identity should be encouraged.