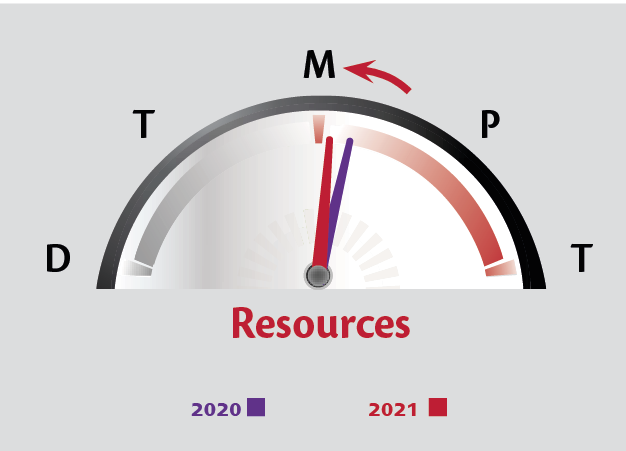 Israel is currently in the process of approving a state budget, after three years of political instability in which it was not possible to formulate an agreeable budget. The budget reflects Israel’s stable economic situation and includes a substantial number of reforms and investments in various initiatives and infrastructure. This year the Israeli economy also benefited from increased investment in high-tech, and especially the cyber sector, which has taken on greater importance due to the pandemic-fueled shift toward remote communications. However, the budget negotiations are taking place in the midst of a resurgence of the COVID-19 pandemic, and in a climate of political pressure: the narrowness of the coalition gives every Knesset member the power to torpedo the budget. In the global arena, pent-up demand from the coronavirus year, savings amassed during the pandemic, and heavy (deficit) spending by the government will create incentives for significant short-term growth. At the same time, there is growing concern about the possibility of inflation. We have slightly moved the Material Resources gauge needle in a negative direction this year, based on two phenomena observed during the pandemic. One is the decision-making and implementation difficulties exhibited by the political echelon in some Western countries, and especially Israel and the United States. The other is the widening of already-substantial economic gaps between different groups, and a worsening of employment disparities.

Efforts to integrate the Haredi sector in Israeli national life must be deepened.
Explanation: Relations between Israeli Haredim and the country’s non-Haredi majority are characterized by perpetual tension, which is now on the rise. The tension stems from a lack of consensus on fundamental matters of state culture – from the (non-Haredi) majority’s disapproval of Haredi reliance on economic assistance funded by other segments of society, and from the fact that the Haredim generally do not serve in the IDF. During the pandemic, yet another source of tension was the refusal of some segments of Haredi society to abide by governmental health guidelines. Tension also resulted from the Mount Meron disaster on Lag B’Omer, in which over 40 people were killed. The Haredi public’s emergence as a numerically and socially significant factor in the Jewish world necessitates cooperation between Haredi leaders and the leaders of other Jewish sectors. This is the case regarding the Haredi sector’s integration in Israeli national life (national service, economic contribution, social and political integration), and also regarding its further integration in the leadership of Jewish communities in the Diaspora.

The COVID-19 pandemic widened socioeconomic gaps that need to be addressed.
Explanation: In Israel and elsewhere, the COVID-19 pandemic accelerated processes that widen socioeconomic disparities between different sectors, with education and vocational training as primary contributing factors. In Israel, paradoxically, the average wage rose during the crisis, as most jobseekers (those who were dismissed or placed on furlough) belonged to the lower socioeconomic sectors to begin with. Similar problems were observed in many other nations, with disparities widening not just between sectors within individual countries, but also between wealthy and less wealthy countries. In light of these developments, the government must comprehensively address disparities in Israel, both in order to improve the status of the country’s less affluent populations, and to keep Israel from plummeting on the global prosperity scale.

Investment in strengthening Israel’s cyber sector must continue.
Explanation: The fact that the digital sphere emerged stronger from the pandemic underscores the importance of the high-tech sector in general, and the cybersecurity industry in particular. This growing importance, along with an upsurge in cyber warfare and cybercrime, drove a dramatic rise in investment in Israeli cybersecurity companies this year (Israel is regarded as a global power in this field). The continuing worldwide trend toward digitization will likely sustain demand for Israeli products, contribute to Israel’s relatively rapid recovery from the pandemic-spawned economic slowdown, and bolster Israel’s status as an economic powerhouse and knowledge hub. This strong showing gives Israel media and diplomatic leverage as many other countries would like to benefit from its technology and knowhow. However, as evidenced by the recent scandal involving the NSO Group, it is very important that Israel carefully manage the export licenses granted to firms active in the offensive cybersphere.