The View Through Big-Data: An Initial Analysis of 15 Million Tweets by AIPAC and J Street Followers 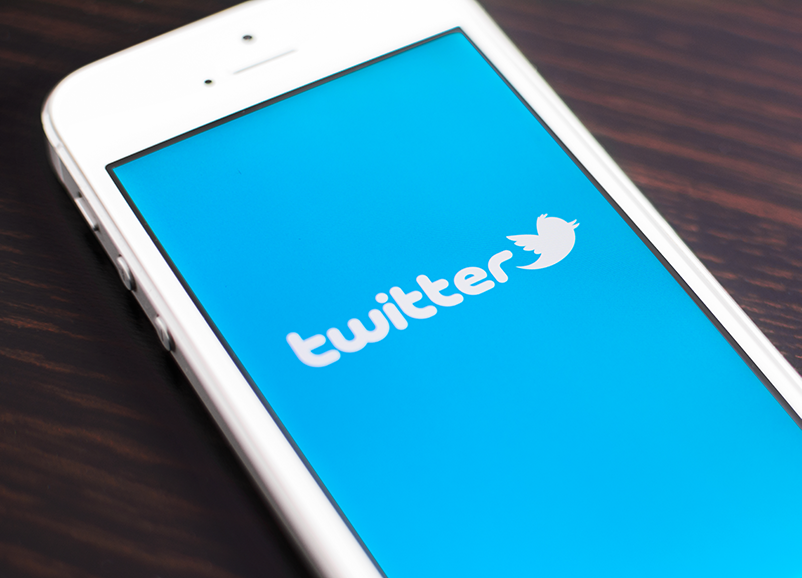 The American Israel Public Affairs Committee (AIPAC) and J Street, both define themselves as “pro-Israel” organizations that seek to advance the US-Israel relationship and help secure a Jewish and Democratic Israel at peace with its Palestinian neighbors. Whether one organization fulfills that mission better than the other, tactically or morally, is beyond the scope of this study. However, these two organizations cater to different constituents of engaged members, interested enough in Israel to be associated, at least virtually, with a “pro-Israel” lobby. The overall differences in their supporter’s self-identification and how they relate and engage with Israel is important to better understand one of the most interesting fault lines within the Jewish community.

The growing field of data science has provided researchers with an entirely new set of tools and methodologies to answer fundamental questions that Jewish community organizations attempt to resolve. We can analyze an individual’s digital footprint on social media and measure not only the frequency with which they are discussing Israel in their posts, but the sentiments they are expressing through their choice of vocabulary. Are their posts about Israel generally positive or negative, are they driven by a sense of pride or shame? How do they actually self-identify?

Social media is, of course, not free of bias – there is an inherent selection bias. People on social media associating with AIPAC and J Street might not be truly representative of the organizations’ actual membership. Their views might be more radical and their level of interest more intense than the average supporter or member. But this does not mean their views and behaviors are unimportant and not indicative of broader trends taking place beyond social media.

For the purposes of this and future JPPI studies in this series, we will be focusing exclusively on the world of Twitter as an avenue of research.[1] The simplicity and openness of its platform, the standardized length of tweets, and accessibility of organized data make Twitter the ideal social media network for this type of research. According to latest figures from the Pew Research Center, Twitter is used by approximately 23% of U.S. adults. In late 2020, Pew reported that 59% of Twitter users and 15% of the overall population of U.S. adults regularly get news from the site. Twitter is more popular among people aged 18 to 29, higher-wage earners, college educated, and urban dwellers. While Twitter may not be the most widely used social media platform, its societal influence cannot be overlooked.

This research uses publicly available profiles and recent tweets of people who follow either AIPAC or J Street. Both organizations joined Twitter around the same time, J Street in May 2008 and AIPAC in August 2008. As of this writing, AIPAC, the older, more established of the two organizations has 107,752 followers and J Street, the new kid on the block, has roughly 33,626. The number of people who follow both organizations is 6,574. This relatively small proportion of shared followers is not surprising. The perception of AIPAC  as “centrist” and J Street as “left-leaning” inevitably contributes to each organization attracting a distinct group of followers, even though their missions are ostensibly the same. But just how different are their followers?

Twitter users have the option of including a 160-character bio about themselves in their profile. Ignoring the relatively few individuals who follow both organizations, roughly half of the followers of AIPAC and J Street have included a bio about themselves. Using these bios (54,366 AIPAC followers and 17,682 from J Street) a relatively new process of quantitative analysis called text mining was conducted. Each bio was broken down into the words that compose it. After removing non-informative ‘stop words,’ such as “the,” “about,” “as,” “in,” etc., we counted the total number of instances each word was used across all bios of each organization’s followers. Below is a ranked list of the top 20 most prevalent words used by AIPAC and J Street followers. 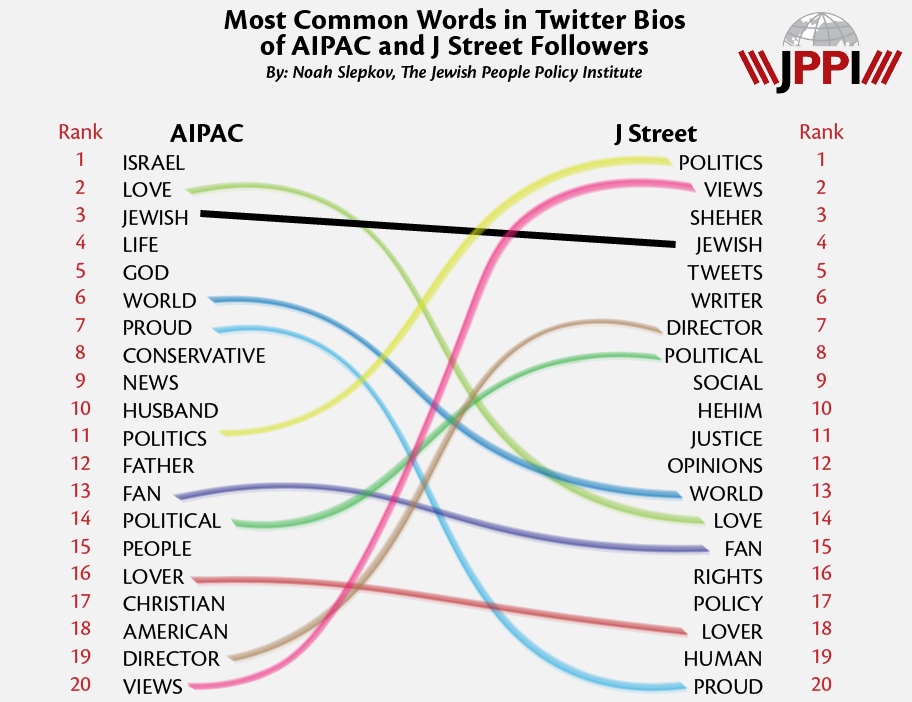 The words and their ranking demonstrate the differences between the two constituencies. Only half of the top 20 words found in the bios overlap. The most glaring difference, though, is that “Israel” is the most common word within the bios of AIPAC followers but is absent from J Street’s top 20. In fact, Israel is not even in the top 50; it is ranked 61st most common. In comparison to AIPAC followers, there is evidently a clear reluctance among J Street followers to publicly associate themselves with Israel within their bios.

Describing oneself as Jewish, on the other hand, is effectively as common among J Street followers as it is with AIPAC’s. This strongly suggests that explicit outward identification of being Jewish is not affected by the same forces that are driving Jews to choose between either associating with AIPAC or J Street.

A noteworthy and topical observation from the table above is the significant tendency among J Street followers to include preferred gender pronouns in their bios, such as “she/her” and “he/him.” Use of these pronouns on social media signals that one is respectful and tolerant of other people’s gender identification preferences and wants to help create a diverse and inclusive environment.  “I’m he/him, if you are they/them, I’m cool with it.” This trend, part of the ‘Woke’ cultural vernacular, is an indication that J Street followers are attempting to be politically correct and attuned to the broader cultural movement toward social and racial justice in America. This is in stark contrast to the prevalence of words such as “god,” “conservative,” or “Christian” in the bios of AIPAC followers, which are more indicative of ‘traditional values.’

Besides self-identification, how do AIPAC and J Street followers differ in the way they relate to Israel? To find out, we analyze the last 200 tweets from each their followers. In total, this study consists of 11,312,734 tweets (including retweets) generated from AIPAC followers and 3,685,112 from followers of J Street. Each tweet is categorized based on whether it contains the word “Israel.” From this data it is found that 48.1% of AIPAC followers and 39.5% of J Street followers have mentioned Israel at least once in their previous 200 tweets. This relatively small disparity is proof that there is not a significant difference between the frequency with which AIPAC and J Street followers discuss Israel on social media, but what about latent emotions contained within the Israel tweets?

Each tweet containing the word Israel was broken down into its compositional words, which are then assigned an associated sentiment (anger, anticipation, disgust, fear, joy, sadness, surprise, trust, positive, negative) based on the NRC Word-Emotion Association Lexicon.[2] Through this process it is possible to determine which words and sentiments are more likely to be found in the Israel related tweets of AIPAC followers and which from J Street. The graph below shows that expressed sentiments are more common among J Street followers, indicating that their tweets are more emotionally charged. This is further evidenced by tweets devoid of sentiments (“none”) more common among AIPAC followers. Most notably, the sentiments that have the strongest correlation are joy and sadness among AIPAC and J Street respectively. A score of 0 along the x-axis means that there is no significant difference between the groups of followers. 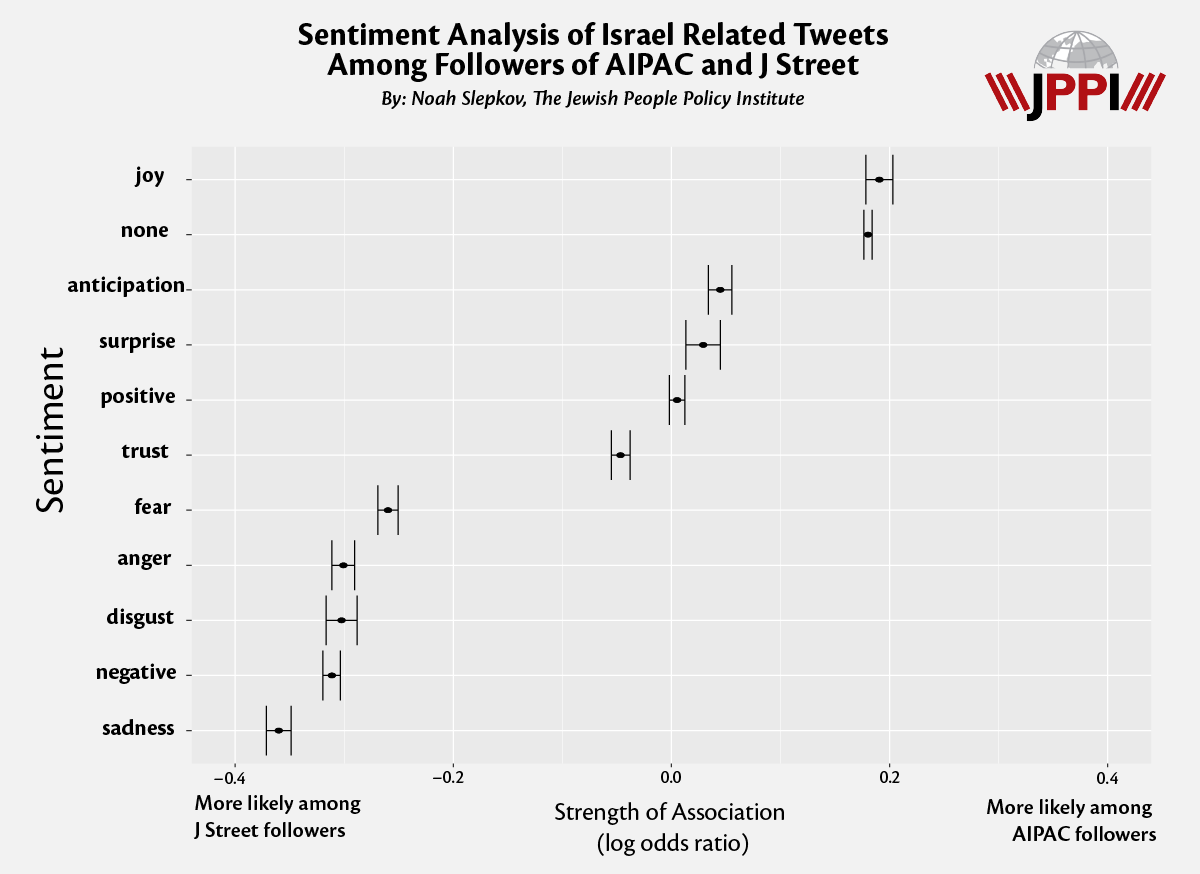 ‘Sadness’ was the most disproportionately conveyed sentiment by J Street followers, followed by ‘disgust’ and ‘anger.’ The following graph shows the specific words included in the “sadness” sentiment found in tweets mentioning Israel most likely to be used by followers of one organization and not the other. For example, the word ‘unequal’ has a greater probability of being used by J Street followers, while ‘jealousy’ has a greater probability of being used among AIPAC followers. 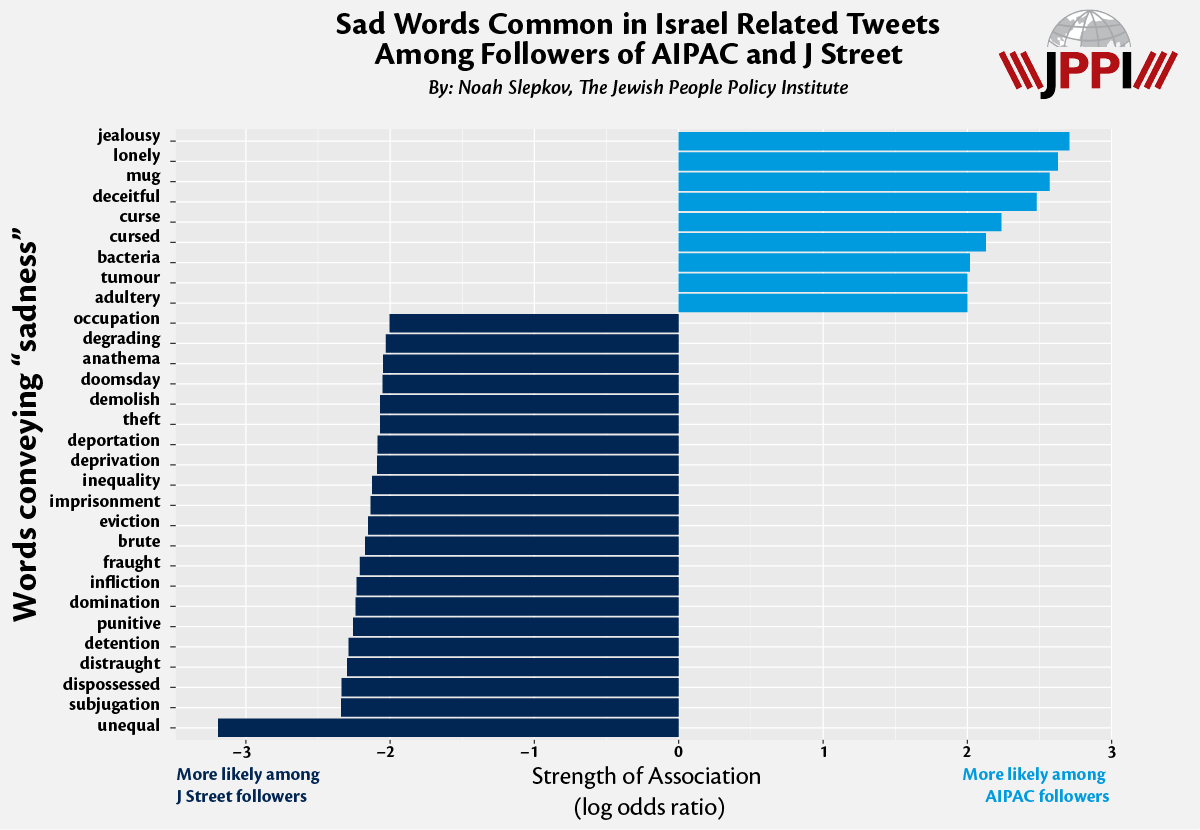 Without context, it is difficult to know how these words were used to relate to Israel – were they in defense of Israel or critical of it? Regardless of context, the fact remains that J Street followers are more likely to relate to contentious and controversial issues in their tweets about Israel compared to the followers of AIPAC.

While this type of sentiment analysis is not perfect and requires further development for it to truly capture the overall sentiment expressed in a 280-character thought, it does give us an interesting angle on how the discourse surrounding Israel differs between these two organizations. What is apparent though is a community that shares a connection to their Jewish identity but differs in their discussion of Israel’s policies.

[1] For readers unfamiliar with the Twitter platform, users (organizations and individuals) choose who and what they want to “follow” (subscribe to). When a user “tweets” (posts something limited to 280 characters), those following them will see the tweet in their feed or receive a notification on their device. If they want, users can respond by liking the tweet, “retweeting” it (forwarding the tweet to their own followers), and/or replying to the tweet (commenting on it). All tweets are public, unless a user changes their privacy setting to prevent people who don’t follow them from seeing their tweets.

[2] The words “occupation,” “apartheid,” “antisemitic,” and “antisemitism” were added to the lexicon to help capture discourse related to Israel.