Was the Coronavirus Year Really One of Deepening Polarization?

The past year presented Israeli society and its elected officials with quite a few challenges. Notable among them was a sense of polarization and (some maintain) hatred between different population sectors. This paper looks at the impact of these challenges in terms of polarization in Israel, emphasizing rifts in three main areas – politics, religion, and the economy. According to the data, polarization between different groups in Israeli society, across all three indicators, has worsened.

Since the early years of statehood, Israel, as a nation of immigrants, has been marked by rifts between different population groups. The past year witnessed two national elections (in addition to the two elections held the previous year), a prime minister serving under the shadow of criminal indictments, and, of course, a global pandemic that burdened an already unstable and jittery political system with extraordinary health and economic challenges. All of these things led to controversial decisions that brought to the surface and amplified problems and disparities between different Israeli population groups.[1] The question arises whether the national mood currently conveyed by the media and the political system indeed reflects deepening polarization in Israeli society.

To answer this question, we will assess Israeli polarization levels in the wake of the coronavirus year in terms of three areas of tension whose centrality had already been established in earlier studies of the Israeli “tension map.” These three forms of tension – political tension, religious tension (the religiosity spectrum), and economic/socioeconomic tension (i.e., inequality) – were prominent in the Israeli public and political discourse during the pandemic year.

The most notable source of tension, at least during the months leading up to the elections, was the political sphere. The Israel Democracy Institute’s Israeli Democracy Index each year asks respondents to identify the most severe tension in Israeli society.[2] As we can see below, the perception that friction between political camps constitutes Israel’s most significant source of tension has become stronger in recent years. 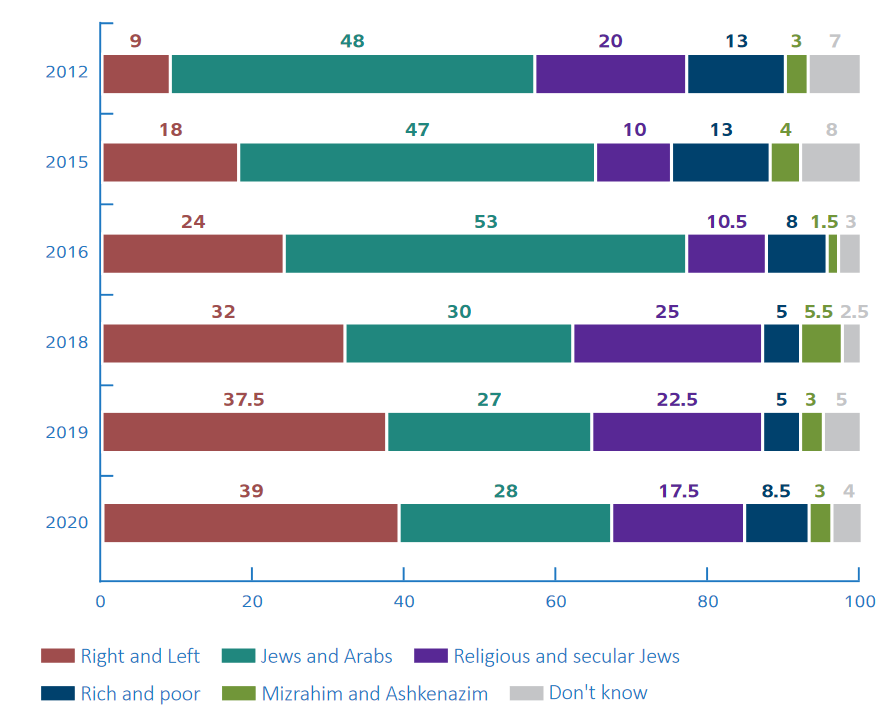 Two main trends are of particular use in assessing the depth of Israel’s political tension or polarization. One has to do with disparities in support of ideological positions between left and right. Responses to self-definition questions in the JPPI’s Pluralism Index,[3] indicate no substantial change over the last few years in the political identity groups with which most Israelis affiliate (the Israeli population being concentrated largely on the right-wing side of the political map). The outcomes of the past few rounds of elections, in which two blocs (neither enjoying a clear majority) could be identified, support the survey findings: right-wing parties are present in both blocs, and the political right still constitutes the majority. We saw no meaningful movement in this sphere in the most recent elections, despite the effects of the past year.

The other trend to consider when assessing political polarization is the party map and in particular, the power of the large parties versus the small ones. Large, strong parties make it possible to create anchors, stabilize the system, and reduce political extortion. They also suggest an ability to unite and to attain a consensus. The fact that so many small parties exist in Israel and manage to pass the electoral threshold testifies to the prevailing rifts and the degree to which sectoral interests predominate. The last national election significantly strengthened the small parties – their number grew, as did the total number of mandates they garnered. While eight small parties participated in last year’s elections, reaching a total of 51 mandates, this year’s elections saw the number of small parties increase to 13, with 73 mandates. Even when we compare the most recent election results with those of past elections in which small parties were more numerous or more powerful, we still find that the number of such parties that passed the electoral threshold, and the total number of mandates achieved by all of the small parties, are among the highest of recent years.[4] Unlike the gap in ideological positions, which shows no meaningful movement, the party map shows signs of deepening of polarization.

The second form of tension (which made many of the headlines in recent months) has to do with polarization along the tradition/religion spectrum (especially vis-à-vis the Haredim). The Jewish People Policy Institute’s Pluralism Index takes an annual look at how different Israeli populations perceive the degree to which various reference groups make a positive contribution to Israeli society. The Haredi community (along with the Arab community) regularly ranks at the bottom of the scale when other groups are asked about its societal contribution.

Figure 2: Percentage of those who feel that the Haredim make a positive contribution to Israeli society, by self-identification along the religiosity spectrum (2016-2021)

The following question was added to this year’s Pluralism Index survey: “Did the behavior of the Haredim during the coronavirus pandemic undermine unity among Israeli citizens?”

Figure 3: Did the behavior of the Haredim during the coronavirus pandemic undermine unity among Israeli citizens? 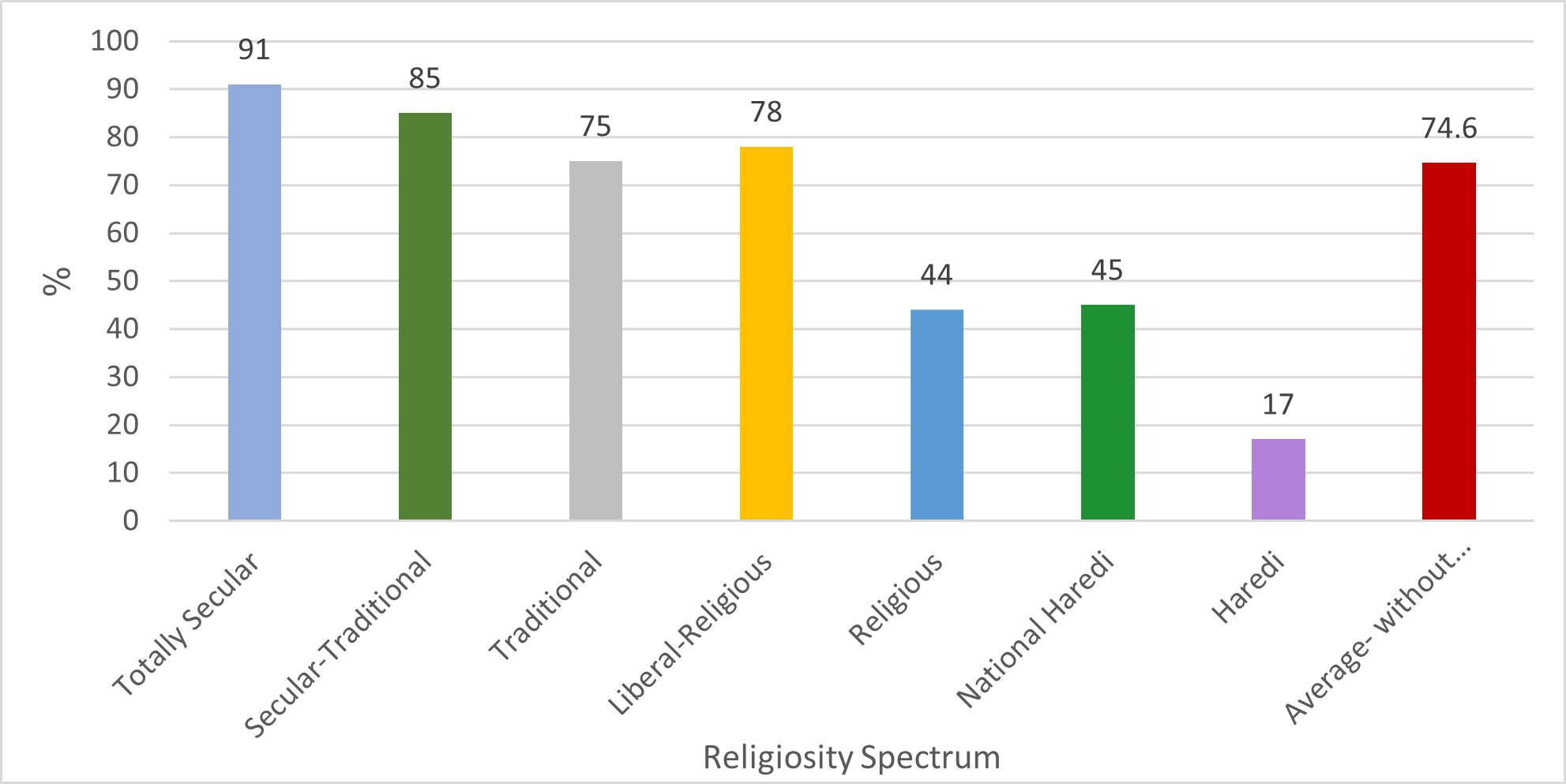 The data indicate that, although more secular people said this year (compared with earlier years) that the Haredim make a positive contribution to Israeli society, the vast majority of respondents (91%) agreed with the statement that the behavior of the Haredim over the past year undermined unity among Israeli citizens. In general, the farther we move toward the groups at the more religious end of the spectrum, the lower the level of agreement with the latter statement. Although nearly half of the religious and Torah religious respondents agreed with that statement, there are apparent differences between groups along the religiosity spectrum.

The Israeli Democracy Index for 2020[5] also addressed the impact of the coronavirus on relations between the Haredim and Israel’s other population groups, asking “In your opinion, how has the coronavirus pandemic in Israel affected [the relationship] between non-Haredim and Haredim?” Over half of the respondents stated that the crisis had damaged relations between non-Haredim and Haredim. The percentage of those who felt this way was highest among the Haredi population (71%), followed by the secular population (62%). The lowest percentage of those who shared this view was among the traditional-religious (48%) (the percentage of religious respondents who felt this way was 58%, while the percentage of non-religious traditional respondents was 53%). These data, like those of JPPI, indicate that the coronavirus pandemic had a negative impact on relations between different Israeli population groups, especially between the Haredim and everyone else.

The third form of tension we addressed, which relates directly to the pandemic and its negative impact, is that of economic tension/socioeconomic disparity. A chapter of JPPI’s 2020 Annual Assessment dedicated specifically to the topic of polarization[6] pointed out that, although Israel’s inequality rates are still high compared with those of other developed countries, the dominant trend in recent years has been toward a gradual reduction of disparities. The coronavirus pandemic, and the four lockdowns instituted over the course of the year to contain it, negatively affected most Israeli citizens. However, as the data show, those worst affected belong to populations that were weaker to begin with – young people, low-wage earners, women, and Arabs (another sector hit hard by the crisis and the public health measures was the self-employed).[7] At an early point in the crisis, the Israeli government launched a number of programs intended to help affected workers and mitigate the damage; these measures included unemployment benefits for workers on unpaid furlough, National Insurance Institute leniencies, and assistance programs for the self-employed.[8] Additionally, since March 2021 we have been seeing a gradual reopening of the economy and a return to the labor market. Despite these efforts, the unemployment rate is still high, and many people have joined the ranks of the needy (aid organizations reported a significant increase in the number of those seeking assistance over this past Passover, particularly among those who hadn’t needed help before). Also, many citizens depleted their savings in order to survive the past year. We don’t have data at this point, but one may assume that, after a few years in which Israel successfully strove to reduce disparities and economic inequality, the coronavirus year reversed that trend, at least in the short term.

To conclude: data on the three areas of tension – political, religious, and economic – indicate that the coronavirus year and its accompanying crises intensified the polarization between different Israeli population sectors. In order to repair the damage wrought by the pandemic, concrete measures must be taken. In his remarks at the opening of the 24th Knesset, President Reuven (Ruvi) Rivlin stressed that “if we are not able to find a new model of partnership that allows us to live together here in mutual respect and genuine shared commitment to each other, our national resilience will be in real jeopardy.” A few days later, the torch-lighting ceremony marking Israel’s 73rd Independence Day honored citizens “working to strengthen Israel’s social resilience, shared values and unity.” Both instances attest to the Israeli leadership’s awareness of polarization and its impact; but this is not enough.

Israel’s newly elected officials, in the Knesset and the government, must take concrete steps to heal the existing rifts. In the short term, this can be done through the Ministry of Education, school principals, and community center directors, via campaigns and, no less importantly, through personal example and an end to vilifying and divisive discourse among political officials. In the long term, thought should be given to mechanisms, organizations, and strategic programs capable of reconciling different population groups, eradicating verbal violence, and mitigating the harmful impacts of political, economic, and (of particular relevance at present) health crises.

But the job can’t be left solely to the politicians. We, as a society and as individuals, need to take responsibility. In the Second Lebanon War, in the Carmel Disaster, and in many other personal instances when citizens needed help, Israelis mobilized en masse to lend a hand, each in accordance with his or her abilities and skills. The coronavirus lockdowns and the large-scale economic damage made assistance harder and more complicated. Now that the economy has reopened and life is slowly returning to normal, we have to join forces, identify those who’ve suffered economically, embrace those we’ve shunned and vilified for their political opinions or religious beliefs, and display a little more tolerance and generosity.

Mutual responsibility and unity won’t just help us shorten the lengthy and challenging economic recovery process; they will also improve the reality to which we were accustomed before the pandemic. Perhaps we will find that the crisis has enabled us to re-engage with the dream that lies at the heart of the Zionist vision – that of an exemplary state for the Jewish people.

[1] For example, the decision to convert the lockdown in “red” cities into a night curfew.

See: “Traffic Light Plan Changed due to Haredi Pressure: Night Curfew in Red Localities Instead of a Lockdown,” DoctorsOnly — https://publichealth.doctorsonly.co.il/2020/09/205135 .

[6] The Jewish People Policy Institute, “Integrated Index: Polarization in Israel and US Jewry,” Annual Assessment of the Situation and Dynamics of the Jewish People, 2020-5780.

[7] For a more in-depth discussion, see: Yaish, Meir and Tali Krystal, The Consequences of the Coronavirus Pandemic for Inequality, University of Haifa.

Employment Service data also provide a picture (though they are updated less frequently):

[8] Zohar, Gal, “The Emerging Crisis in the Labor Market due to the Coronavirus: An International Survey,” The Israeli Employment Service, March 25, 2020.