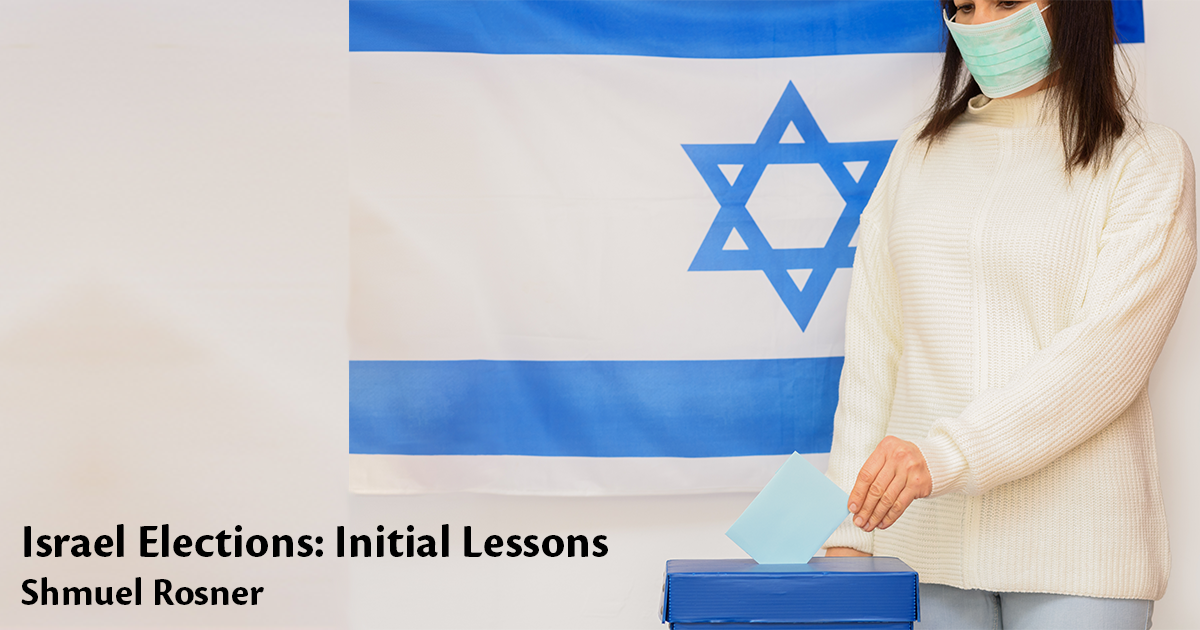 The most recent Israeli elections, like all election campaigns, can be analyzed on the tactical, short-term level or in regard to longer-term trends. On the tactical level, the elections did not result in a decisive victory to any of the political camps. This deadlock could lead to a fifth election cycle, or alternately, to the piecing together of an ideologically incoherent coalition, that will, therefore, not have a strong chance of surviving long. In a series of political moves, Prime Minister Benjamin Netanyahu succeeded in splitting his rival camp. But the outcome remained similar to the results of the previous elections and did not provide a clear winner (at time of writing, the results have not yet been finalized). When examining long-term trends, this election seem like a continuation of its predecessors. Israel is stuck in a near stalemate between the two political camps, divided along what seems to be a personal issue, but is actually much deeper. The question is whether Netanyahu can continue to serve as prime minister.

The legal situation is clear: Netanyahu can continue to serve, even though a number of indictments have been filed against him for corruption. Netanyahu’s supporters hold strong to this fact and claim that challenging Netanyahu’s legitimacy is only a political move employed by those who do not have enough support to win an election against him. Netanyahu’s opponents claim that most of the public is not interested in continuing his tenure of office (as public opinion polls show), and therefore, negating his legitimacy is justified.

The socio-political situation is more complex : in order to decipher its implications, it is helpful to look at voters according to alternative prisms to the main one used in the elections, of who is for or against Netanyahu’s continued service as prime minister, and focus on other characteristics of these voters. These reveal some truths about these voters that do not change significantly from election to election, even if tactical changes in how votes are cast lead to new political possibilities.

When dividing according to the classic right-left paradigm, in relation to foreign affairs and defense, nearly 60 percent of the electorate voted for parties that can be classified as “right-wing.” This is not surprising. The positions of the Israeli public on these matters (Iran, Lebanon, Hamas, the Palestinian issue, settlements, etc.) are stable and well known. Roughly 60 percent of the Jewish public self-identifies as “right” or “center-right.” Even a significant number of “centrist” voters (about a quarter of Jewish voters) do not offer a practical alternative to the policies set by the Israeli government on these issues in recent years.

When dividing according to religiosity, nearly 20 percent of the electorate voted for parties on the conservative end of the spectrum. Thus, Shas and United Torah Judaism voters, and the Religious Zionist party, represent voters with a very Orthodox worldview in the religious sense, and a very hawkish worldview on issues relating to the Israeli-Arab conflict. To these, we can add another group that comprises roughly 4 percent of voters who voted for Ra’am, whose positions on many issues, such as family values, religion and state, the LGBTQ community and others, are similar to the ultra-Orthodox parties in Israel.

Its important to point out that despite significant public anger at the “Haredim” due to the conduct of groups within the sector during the Covid crisis (not following the rules, active opposition to government instructions, etc.) – anger that is expressed in public opinion polls and rhetoric on social media and in other political arenas – their ability to influence political developments through their representatives was not harmed. Practically, it may very well be that the political stalemate, which makes it harder for Netanyahu and his rivals to put together a coalition, only empowers them. It should be noted that the party that ran a primarily “anti-Haredi” campaign (Yisrael Beitenu – Avigdor Lieberman) won fewer mandates in this election cycle compared to previous ones. Yisrael Beitenu’s weakening might not have been caused by this campaign, but the fact that it did not excite the public and attract additional voters could affect the strategy taken by party leaders in future elections in relation to the Haredi challenge.

When dividing the electorate into Arabs and Jews, the 2021 elections once again demonstrated the difficulty of Arab-Israeli voters to gain political representation proportionate to their population share, as well as the practical difficulty of leveraging this representation to influence policy. However, the split in Arab voters in this election could point to a gradual shift in the Israeli-Arab approach to the Israeli political arena. The Ra’am party led by Mansour Abbas announced prior to the elections that it would not rule out any possible coalition partners, including those from the right. This announcement indicates a desire to influence the political system from within, through political bargaining aimed to look after the interests of Israeli-Arab voters. This approach would require conceding the usual agenda of Arab parties, who are viewed by the public (at times justified and at other times less so) as being more concerned with “Palestinian interests” of non-Israelis than those of their actual voters.

In this context, after it became obvious that these elections resulted in another stalemate, even strongly right-wing parties, who have at times employed harsh rhetoric against the Arab minority in Israel (especially the “Religious Zionists”), began speaking differently about the possibility of entering a coalition with an Arab party (or at least the possibility of some kind of a limited joint action in relation to legislative processes in the Knesset).

The fact that a Likud prime minister has not ruled out, and may even require, political partnership with an Arab party – which at least some of his far-right partners are willing to consider – is without a doubt one of the most significant developments of this election. It is clear that the political system is moving toward this possibility, mostly for electoral considerations, which some have called “cynical.” However, one should not underestimate the conceptual shift and the significance of the Israeli public’s openness to greater involvement of Arab parties and Knesset members in the political lives of all Israelis. This development should be taken into consideration when examining the overall significance of the current political stalemate. On one hand, this sharpens a number of tensions and highlights deep divisions between groups in Israeli society, but on the other hand, it accelerates surprising societal processes that could bring about positive long-term change.

Another important division is between parties seeking to implement significant reforms to the judicial system, and limiting the power of the Israeli Supreme Court, and those who strongly oppose this. For this division, it is appropriate to point out three main camps: those who want deep reform, those who want careful and gradual reform, and those opposed to any reform (and who would characterize reform as “damaging the justice system”). According to the election results, the “deep reform” camp does not hold a majority among the voting public. But when taken together with those who favor cautious reform, the two groups in combination certainly form a majority. One can predict that if Netanyahu manages to put together a coalition, it will attempt to bring about some kind of judicial reform. This could include a variety of moves, from changing the authority of the attorney general, to limiting the Supreme Court’s power to overturn Knesset legislation.

To sum up: there is no doubt that that the fact Israel is once again finding it difficult to put together a governing coalition that would offer political stability is problematic, to say the least. The question is whether the post-election negotiations will lead to a temporary solution that will move the political system forward, or if Israel will be dragged to a fifth election cycle in under three years. On the positive side, its worth mentioning that despite the ongoing political challenge, the Israeli voting public remains relatively disciplined, and the election was conducted in an orderly fashion. Israel’s democracy may be stuck in the throes of indecision, with no clear outcome, but at this stage, this distress does not seem to endanger the main systems of governance.