The Law of Return issue adds perspective to our discussion with regard to Jews in Israel and abroad. Of course, such perspective may suffer from bias due to the coronavirus crisis, and its ramifications on public attitudes toward immigration generally. But in this instance, what emerges from the survey seems to be rooted in additional factors, including a recognition that, in recent years, most immigrants to Israel under the Law of Return have not been Jewish, and that the percentage of non-Jews immigrating under the Law of Return is rising. This fact has often come up in the public discourse, especially in the past few years (including the 2019-2020 election cycles).11

The large share of non-Jews among recent immigrants, which is fundamentally undisputed though different interpretations exist regarding the exact numbers, is already causing some leaders, especially within the religiously observant and Haredi sectors, to suggest that the time has come to change the Law of Return’s criteria. Chief Rabbi David Lau has proposed reassessing the Law, noting that “Israel needs to decide if it wants to be a welfare state for the Third World, bringing in everyone who has a connection with Judaism, or perhaps only those who are Jews.”12 The Sephardi Chief Rabbi, Yitzhak Yosef, has endorsed this view, stating that “Those who bring in masses of non-Jews to Israel through [the grandchild] clause due to alien considerations are being unfair first and foremost toward those immigrants, and placing them at every stage of their lives before the untenable reality of living in a Jewish state. Amending the Law of Return is first and foremost in the interest of those immigrants.”13

The Index data suggest that support for the Law of Return in its current form is eroding, and that less than half of the Jewish population approves of it unreservedly.14 But JPPI’s Pluralism Survey found that there are many Jews in Israel who feel that the Law of Return in its present formulation is too broad, and would like to circumscribe it. Some of them would be content with the elimination of the Law’s grandchild clause (which allows the grandchild of a Jew to immigrate to Israel), while others favor an additional eligibility restriction that would allow only those who are themselves Jews to immigrate and become citizens. The support for a Law of Return with stricter criteria is particularly evident among the religiously observant and Haredi populations. This fact takes on additional importance given that a large share of those who support eligibility restrictions are also those who advocate limiting conversion recognition to the Orthodox sphere. The religiously observant/Haredi sector thus supports restrictions on two fronts – both in terms of the number of paths enabling one to join the Jewish people, and in terms of the criteria that allow those interested in doing so, to immigrate to Israel.

Here it is worth noting that a stiffening of the Law of Return criteria, even should it spark controversy, would not necessarily be unacceptable to Diaspora Jewry as a whole. In a JPPI Structured Dialogue on the Jewish spectrum from a few years ago, it emerged that “the growing fluidity of identity in Jewish communities around the world is not leading all Jews to expect Israel relax its criteria for the Law of Return. The Dialogue discussions revealed that a large share of participants from non-Israeli communities felt that “the current definition, which refers to the grandparents’ generation, is too broad.” In accordance with those findings, JPPI also explicitly recommended reassessing “the criteria of the Law of Return,” based on the rationale that, “in light of the cultural and demographic changes in the Jewish world, Israel may want to consider whether changes in those criteria are necessary.”15 However, JPPI recommended that the Law of Return not be amended “without a frank and thoroughgoing process of consultation with Diaspora Jewry.”16 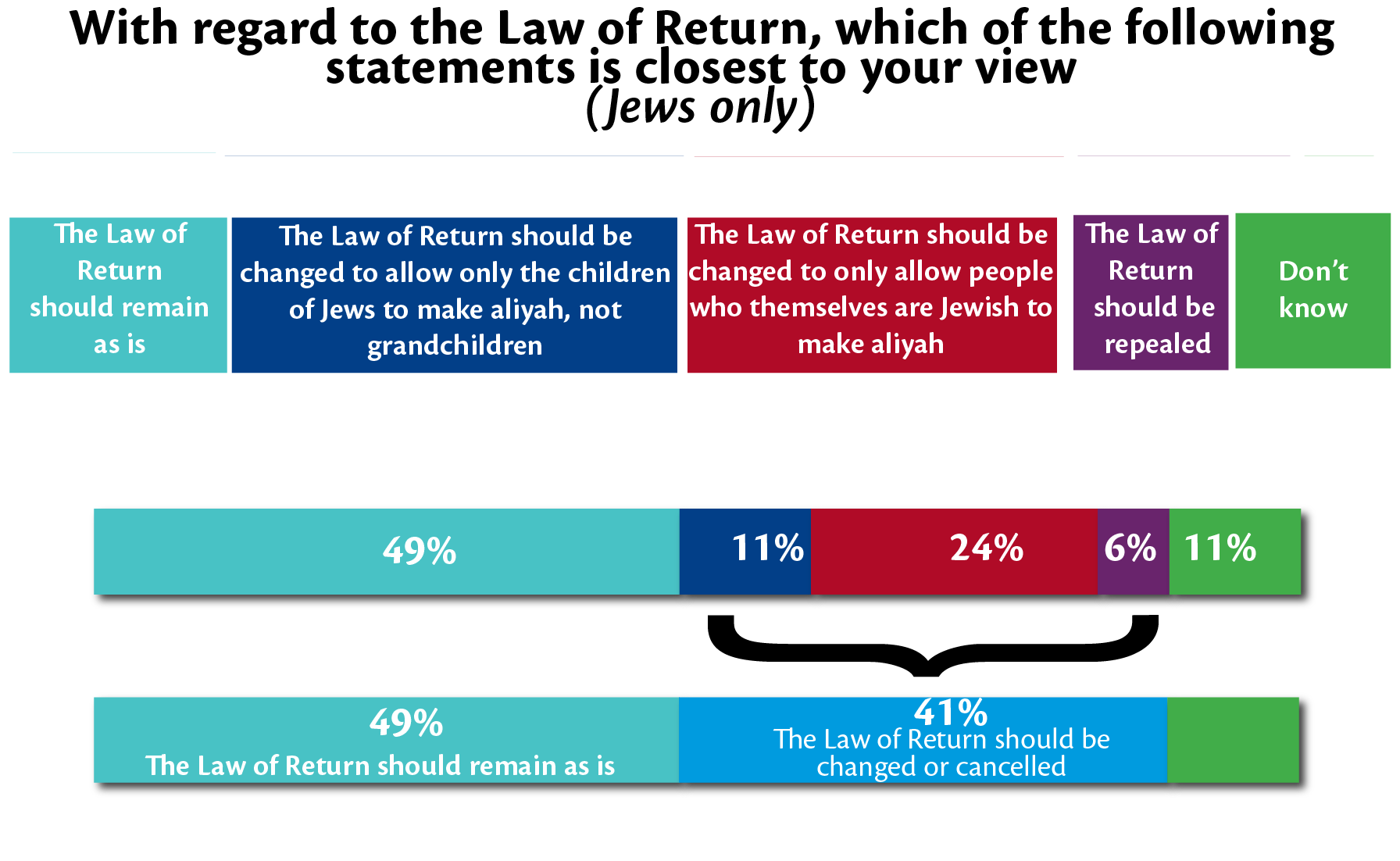