Relations between Diaspora Jews and the non-Jewish societies in which they live are an important engine in shaping Jewish identity.9 Conflicting directions of influence – on one hand, the wish to integrate, and on the other, the wish to preserve unique characteristics – underscore (as in the Israeli case) a number of polarizing factors. Ideology, identification with the Jewish streams, intergenerational characteristics, influence of intermarriage, and connection to Israel are among the factors describing gaps in Diaspora views mentioned in studies.

More than other groups in the United States, Jews tend to vote for the Democratic Party and identify with liberal positions.10 This tendency has increased slightly since the 1980s. However, US Jews are not a homogeneous group, and the political polarization between Jewish groups run parallel to religious stream affiliation. The Orthodox lean more toward conservatism and support for the Republican Party, while Conservative and Reform Jews lean toward liberal positions and support for the Democrats.

As JPPI’s 2017 Annual Assessment pointed out, political ideological gaps between the streams impact both societal integration strategies and American identity generally. The liberal strategy favors values of pluralism, tolerance, and equality while diminishing religious and cultural markers that strengthen difference. The conservative strategy shares the culture and ethical values of the wider society but implements them within the community, according to its traditions, while advancing its own survival and welfare.

Attitudes regarding the gay community

To examine how ideological gaps are reflected among American Jews with respect to a general social issue, we looked at questions related to homosexuality. The Pew Research Center surveyed Jewish views on the subject at two points of time, in 2014 and 2007. Overall, the data point to broad agreement among Jews that homosexuality “should be accepted” (79 percent in 2007 and 81 percent in 2014).

AJC surveys examine the extent to which Judaism is perceived to be an important component in respondents’ lives. Most respondents, regardless of age, consider Judaism an important component of their lives. At the same time, those aged 70 and above are more likely to consider Judaism important to their lives, especially compared to those aged 30-39. The 2013 Pew survey of American Jews showed that the proportion of Jews who have no religion (i.e., they say they have no religion but are connected to Judaism in another way) increases as respondents age falls. This has resulted in significant intergenerational gaps in beliefs and practices. 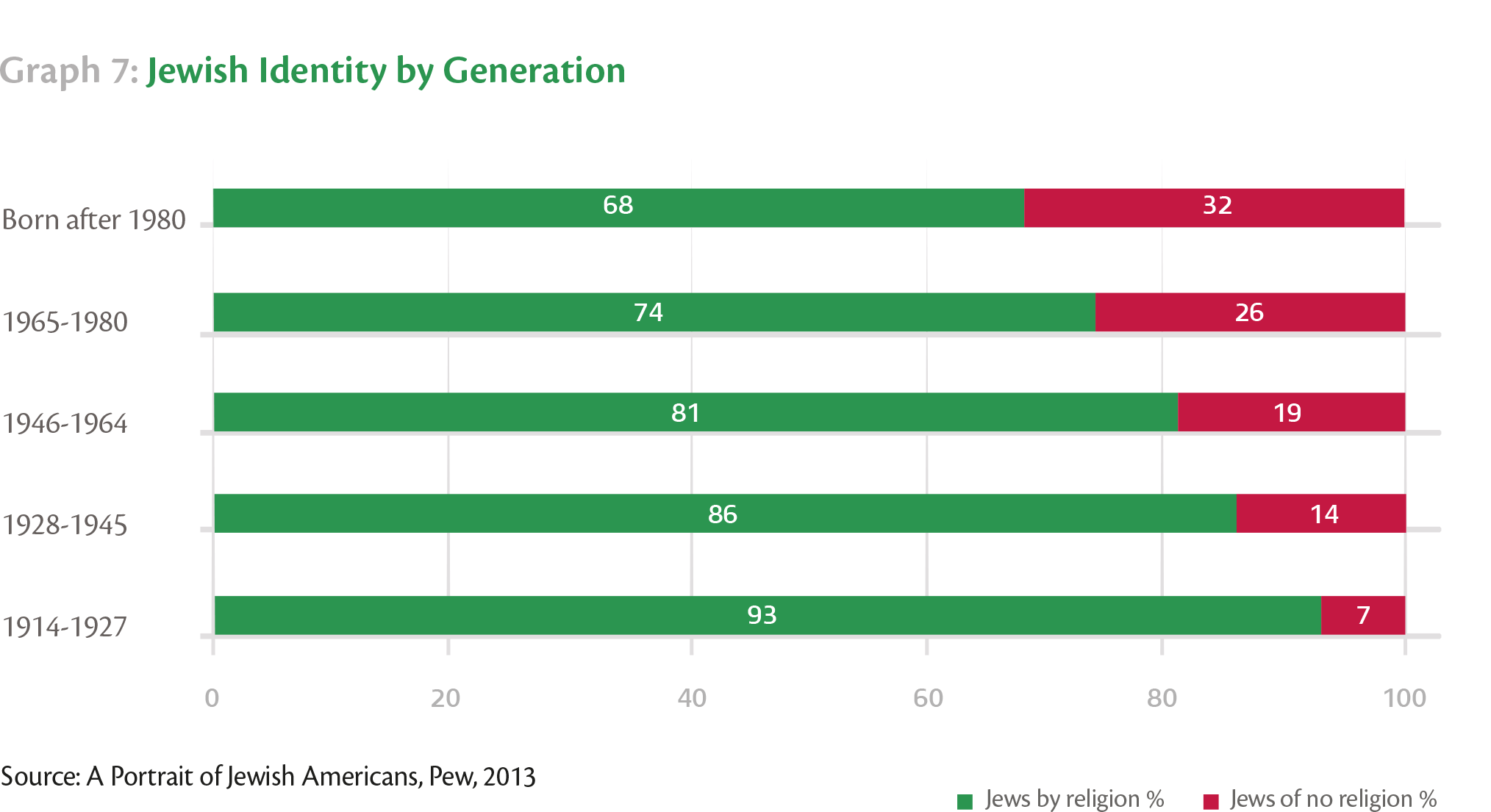 The Impact of intermarriage

Intermarriage in the United States has been widespread in recent decades, and not just among Jews.13 JPPI’s 2016 Structured Dialogue Process dealt with the Jewish spectrum in a time of fluid identity and devoted a chapter to this phenomenon.14 The general consensus was that intermarriage affects the connection to the local Jewish community and to Judaism more broadly.

At the same time, some data (Sasson, et. al., 2017) point to a strengthening connection to Judaism among the children of intermarriage in recent years. 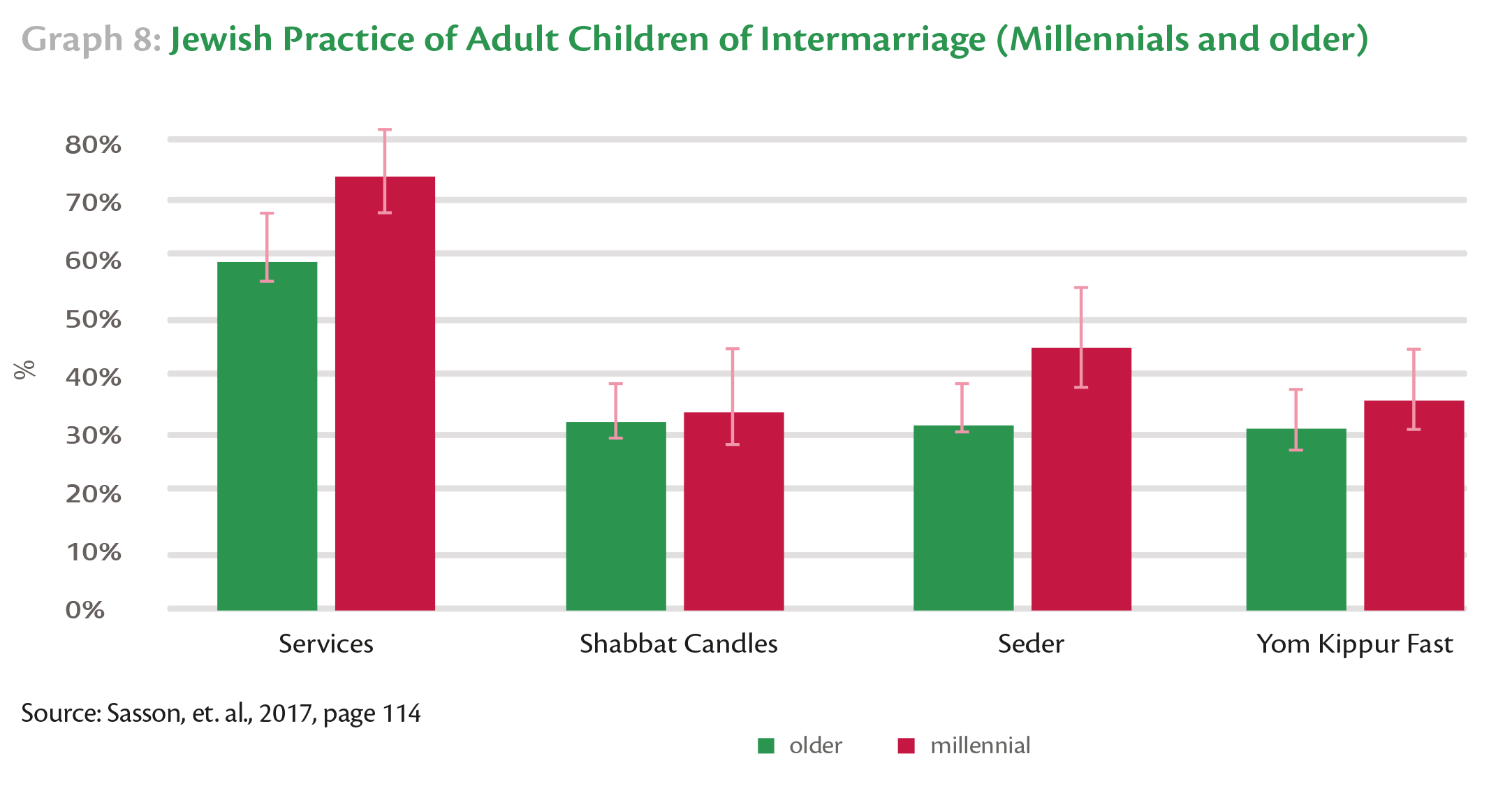 Herbert Weisberg’s 2019 book, The Politics of American Jews, presents a regression analysis of the various factors likely to influence the connection to Israel of American Jews based on two questions: “To what extent do you feel emotionally connected to Israel?” and “To what extent are you concerned for Israel?” The correlation score ranges from 0 to 1 or -1. The closer the number is to zero, the weaker the connection between the variables, and the closer it is to 1 (or -1), the stronger the connection. In Graph 9, line length (along the x axis) indicates the strength of the connection to Israel for each of the questions and according to various demographic variables. We can see that the variables examined thus far here – politics and ideology, denominational affiliation (especially strong effect), and age – influence connection to Israel. Both stream and political party affiliation have more influence on the feeling of connection to Israel than on concern for Israel. The most influential demographic variable was found to be age. Older Jews tend to feel closer to Israel and to be more concerned for it. 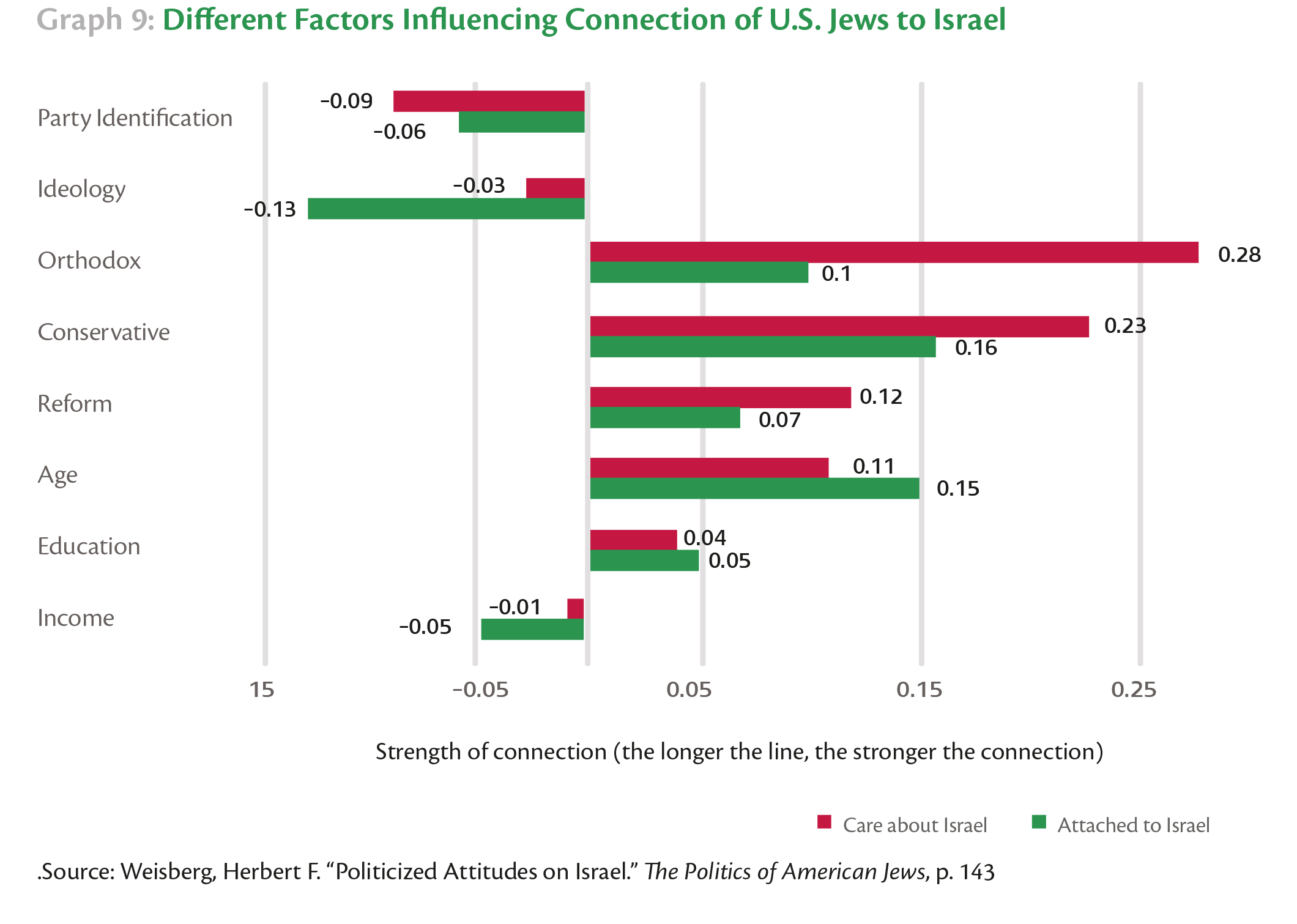 At the same time, the Graph 10 shows that for each of the options (full evacuation, partial evacuation, or no evacuation), the polarization trend (the gap) is narrowing, particularly due to diminishing opposition to evacuation among Republicans. On the question of a Palestinian state, we find gaps based on political affiliation, with most Democrats (69.2 percent) in favor; among Republicans, only 29.7 percent are in favor. It is not possible to point to a clear trend over time. 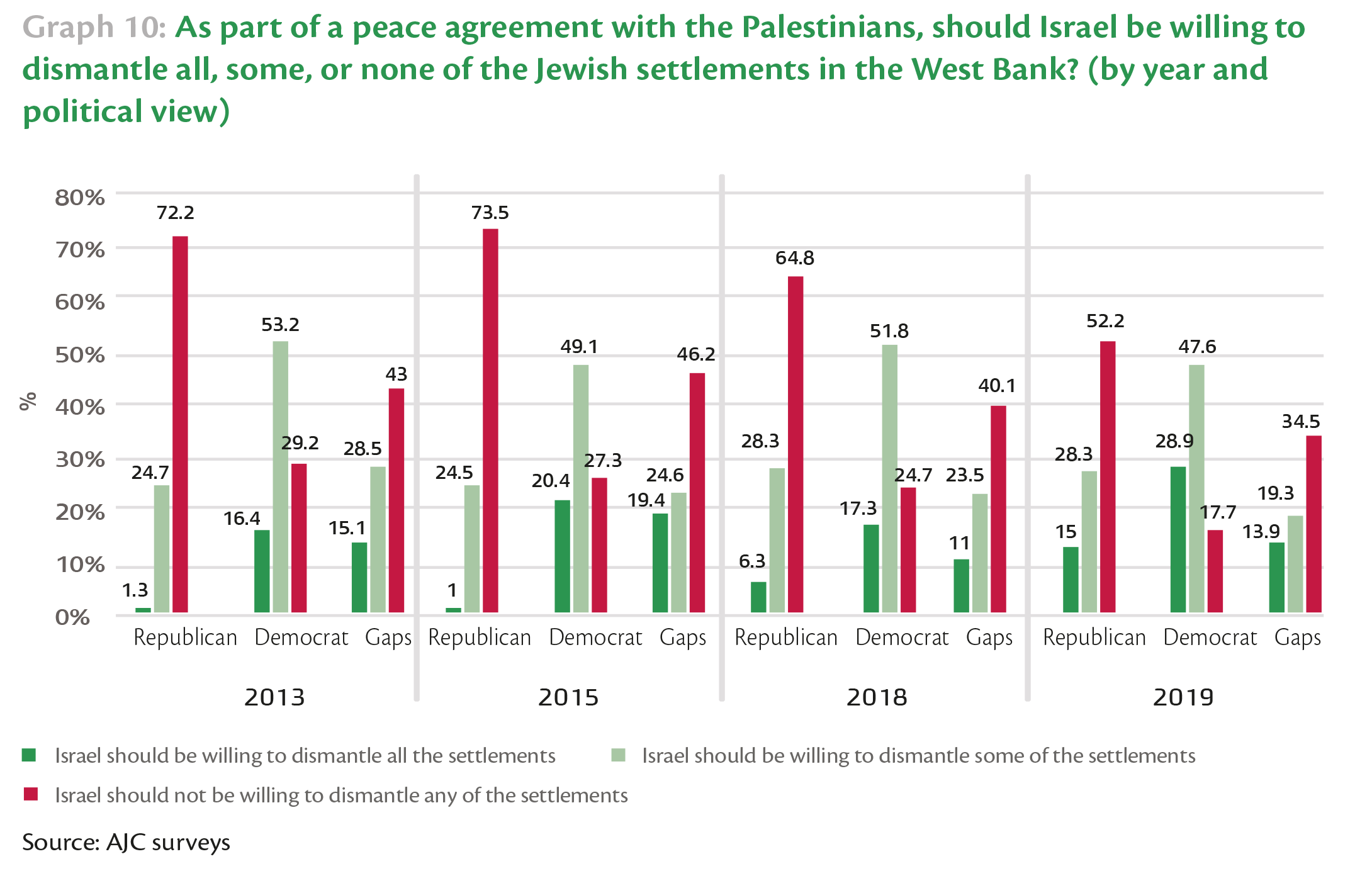 The 2019 Pew survey of American views on Israelis and Palestinians provides further insight into the differences between American-Jews’ attitudes toward the Israeli government and attitudes toward the Israel public. In this examination, the gaps between Democrats and Republicans are clear. Support for the Israeli public are fairly similar (with Republicans more supportive, but not by a large margin). In contrast, when we speak of support for the Israeli government, the gap is real: among Republicans, support stands at 94.7 percent, with most (68.4 percent) being very supportive. Among Democrats, the rate of support is 58.1 percent, with 46.5 percent saying they are supportive but not very supportive.

The “Streams” and the Connection to Israel

In most surveys, the Orthodox tend to agree more than other groups with the statement: ‘Caring about Israel is an important/very important part of my being a Jew.’ At the same time, the rate of agreement in the other groups exceeds 50 percent. The AJC surveys (and the 2013 Pew survey) show widening polarization on this question according to stream affiliation. The largest gap between the groups, which stood at 27 percent in 2000, rose to 55 percent in 2019.16 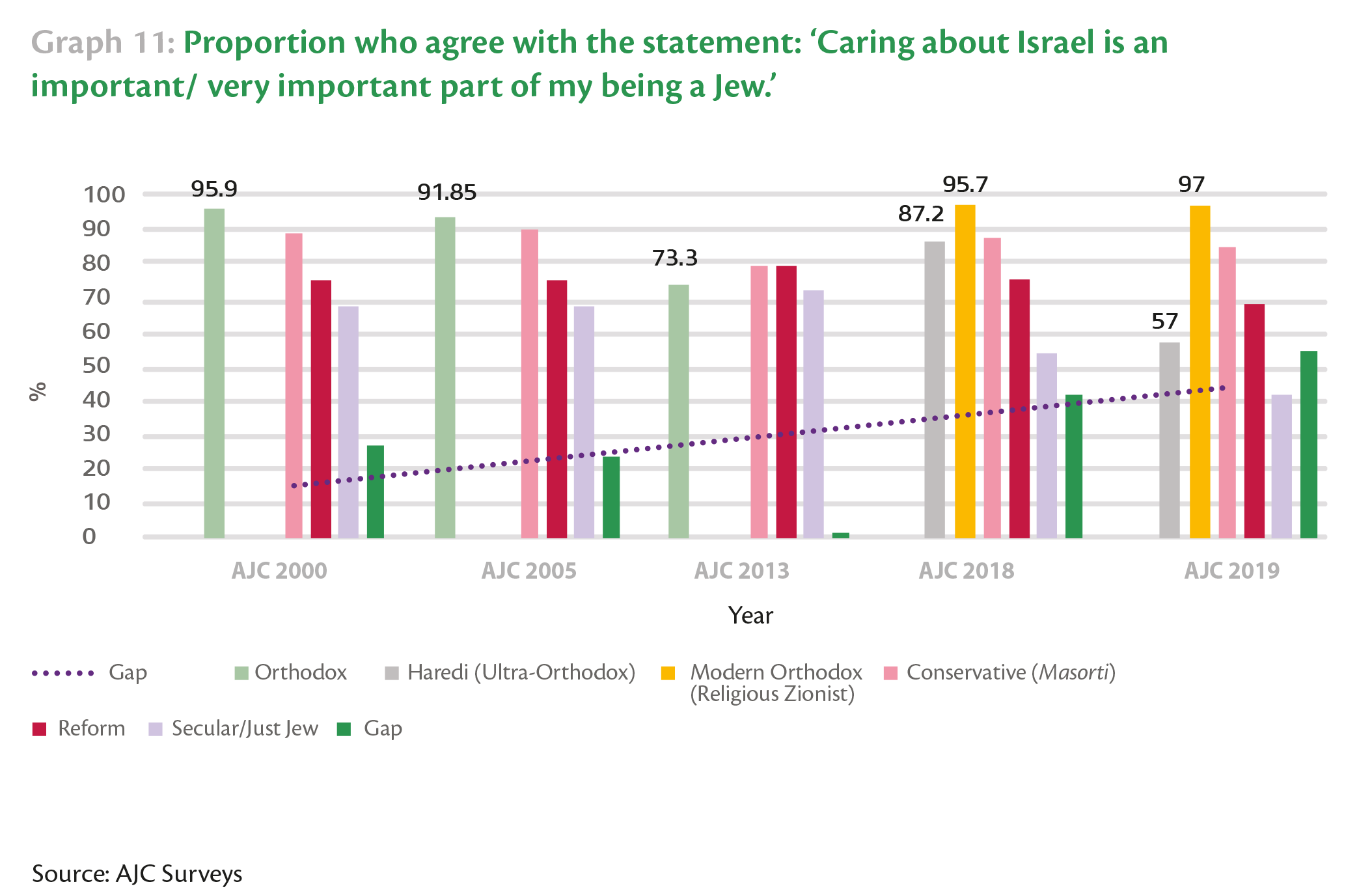 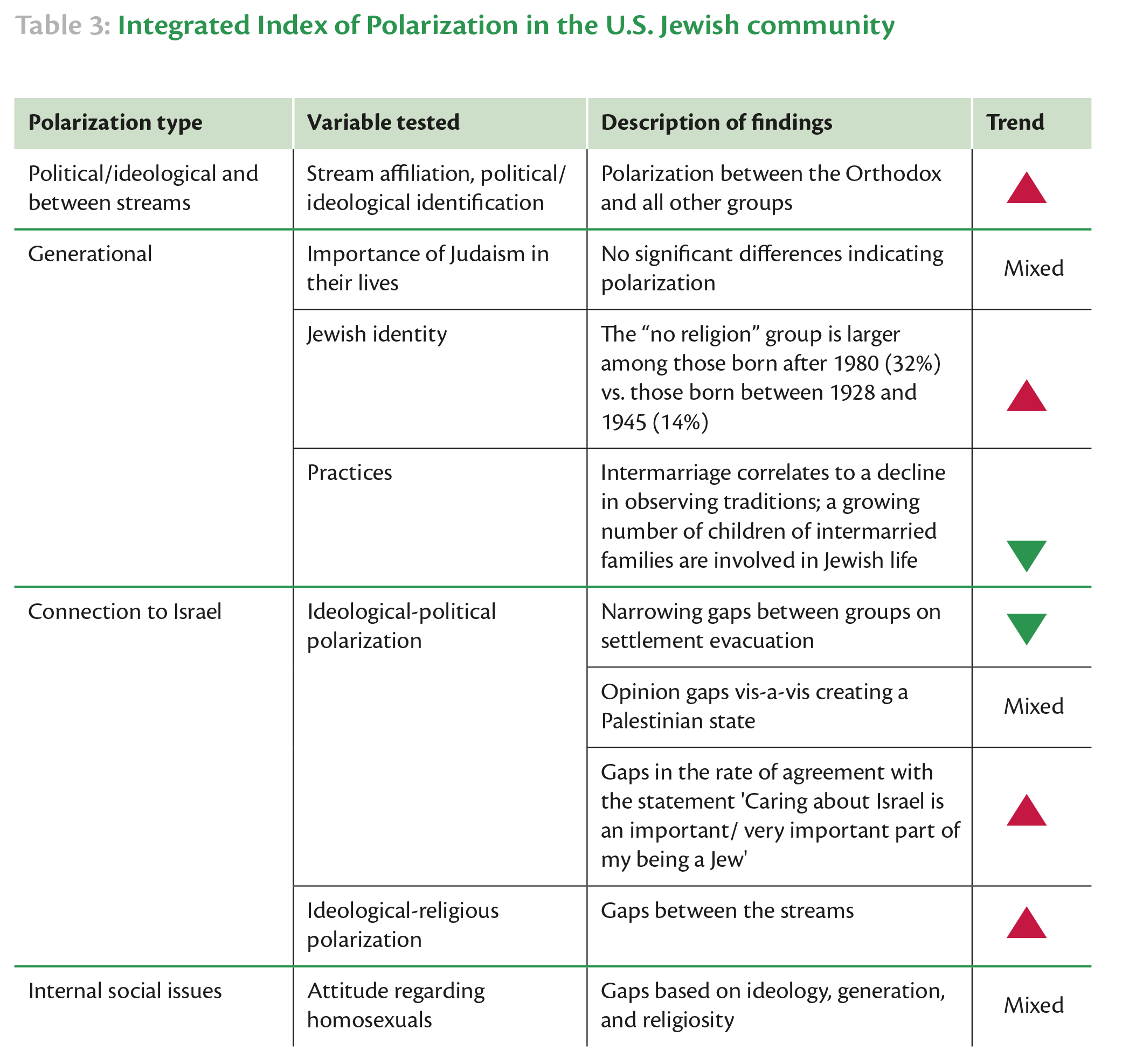