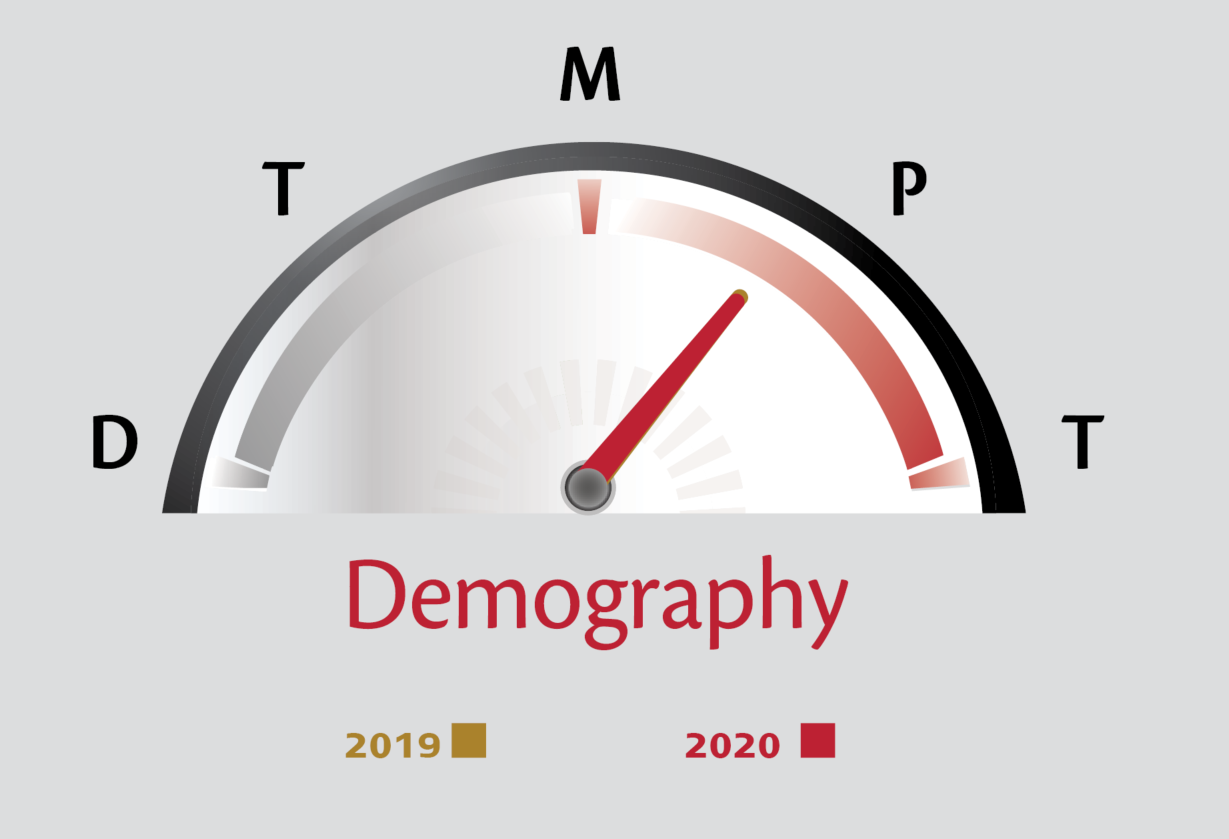 This summary of the main demographic trends last year (2019 data) is being written while the COVID-19 pandemic is still upon us, and it is still too early to assess its influence on the demographic patterns of Jews in Israel and the Diaspora. Assuming there will not be wide-scale mortality, which would affect the Jewish population’s life expectancy, there will be a need in the coming months to track three main demographic metrics:

Prior to the pandemic, and as in recent years, the world’s Jewish population grew at a moderate rate of some 100,000 people last year and was estimated at 14.8 million at the beginning of 2020. This growth was mainly due to an increase in the number of Jews in Israel – from 6.664 million at the beginning of 2019 to 6.773 million at the beginning of 2020 – and was slightly offset by a certain decline in the number of Diaspora Jews. In addition, at the beginning of this year there were 425,000 people in Israel without religion, that is immigrants eligible under the Law of Return but not Halachically Jewish. In total, the proportion of Jews to non-Jews in the State of Israel (including the Jewish settlers in the West Bank) remains stable at 79 percent versus 21 percent. The Jewish group includes those without religion, bearing in mind that they integrate socially and culturally in the majority society (without them, the proportion of Jews to non-Jews would be 74 percent versus 26 percent).

The number of Jews in the United States – the largest Jewish community outside Israel – remains stable at 5.7 million. This estimate relies to a great extent on the 2013 Pew study, A Portrait of Jewish Americans, and on assessments of the demographics of US Jewry since then. At the same time, it should be noted that there are higher estimates of 6.7 or even 7 million. These estimates result from different definitions of who is a Jew, i.e. definitions that also include those who say they are partly Jewish, as well as from the use of other sources that combine several general surveys, each of which includes a small number of Jews.

The increase of the Jewish population in Israel derives mostly from natural increase; the remainder is the result of positive migration (Aliyah). The lion’s share of immigrants to Israel were from Europe (especially Russia, Ukraine, and France); smaller but significant numbers came from the United States and the United Kingdom. It should be noted that, in total, olim arrived from over 80 countries and from every continent. Fewer than half the immigrants to Israel in 2019 were Jewish (more than half were non-Jews eligible under the Law of Return).
The overall fertility rate among Jewish women in Israel increased from 3.09 in 2014 to 3.16 in 2016 and remained unchanged in 2017. The new figure for 2018 shows that fertility has risen again and stands at 3.17. In total, the global Jewish demographic system remained fairly stable last year, with no significant changes.

Against this backdrop, the Demography gauge is unchanged.