In order to try and look at the impact of the COVID-19 crisis in general, and the effect of steps taken by the various organizations vis-a-vis this relationship (with an emphasis on Jews in Israel and the United States), we will present several public opinion polls, particularly those that enable us to trace differences between the period before the crisis and the situation in more recent months.

Surveys of attitudes in Israel 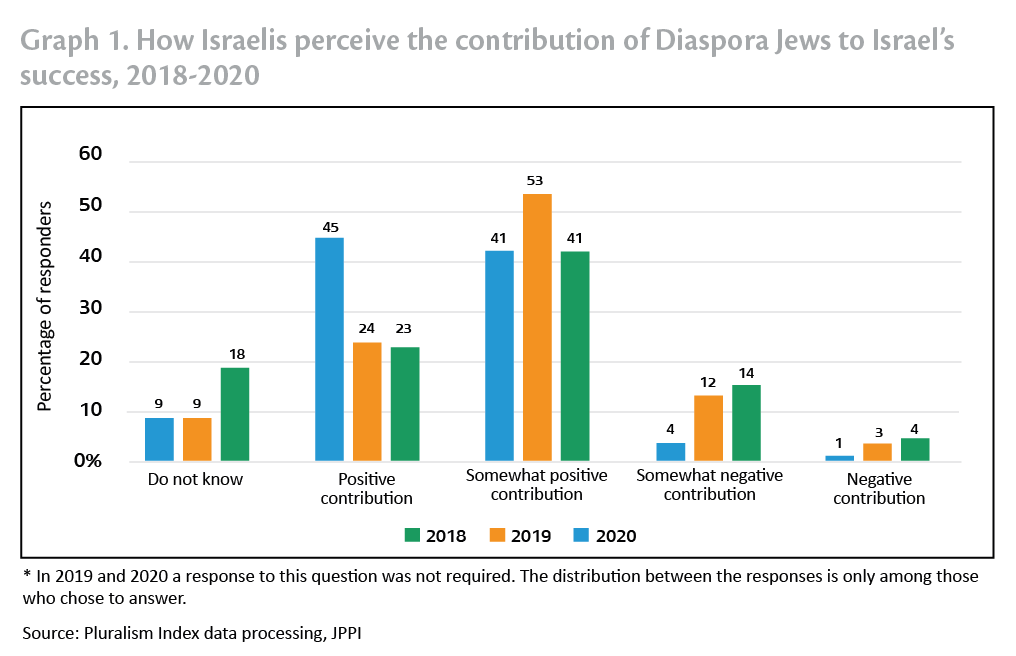 In 2021, in the latter stages of the pandemic, two other questions were asked in the Pluralism Index survey. The first had to do with respondents’ agreement with the statement that Jews in Israel and the Diaspora share a common future; 35% disagreed or didn’t much agree with the statement and 62% agreed or highly agreed (3% said they didn’t know). The second question looked at the attitude of Israeli Jews regarding the statement that Israel must be concerned about Diaspora Jews; 69% of respondents agreed with the statement, 20% disagreed, and 12% said they didn’t know. These data show us that a small minority of Israeli Jews feel that Diaspora Jews make a contribution to Israel. A somewhat greater majority feel that Diaspora and Israeli Jews share a common future, and that Israel must provide assistance to Diaspora Jewry.
We also looked at a survey of Israeli Jews conducted by the American Jewish Committee (AJC). The survey was administered in 2019 and again in 2021. Two questions relating to Israel-Diaspora relations were asked that allow us to gauge whether there was a change in the attitude of Israeli Jews over the two-year period. The first question was: “If we were to describe Jews in the US as family members (metaphorically speaking), would you describe American Jews as…:”

For the purpose of comparison, we can look at the response to a similar AJC survey question asked of US Jews. In 2021, more Israelis considered Diaspora Jews to be close family while a higher percentage of American Jews did not view Israeli Jews as part of the family.

Another question enables us to compare the period immediately prior to the pandemic with the current one concerns the importance of the prosperity and success of Diaspora Jews to the future of the Jewish people. The question was asked somewhat differently each time, but we can see that the percentage of respondents agreeing with this statement was almost unchanged. In 2019 the percentage was 74% and stood at 74.3% in 2021 (with 32.8% stating it is very important and 41.5% stating it is quite important).

The survey conducted in 2021 added another element to the picture of this relationship by asking why the prosperity of Diaspora Jewry was important. More than half of Israeli respondents selected answers that placed Israel at the center. For example, 36% responded that the main reason for needing a prosperous Diaspora Jewry was to promote their respective governments’ support of Israel; 24% felt the reason was that Diaspora Jews donate money to Israel. Only about a quarter (27%) felt the desirability of a prosperous Diaspora Jewry related to the need for diversity, contributes to the strength of the Jewish people.

If we refer to the data from the two surveys, we see that Israeli Jews value Diaspora Jews, feel connected to them, and believe that they contribute to the State of Israel and to Judaism. However, except for a rise seen in the JPPI survey conducted at the beginning of the COVID-19 pandemic (April 2020), we see no indication that the crisis helped to reinforce relations between the communities or changed attitudes of Israeli Jews.

Surveys of attitudes in the United States

Although there are only a few surveys of Israelis examining the relationship with the Diaspora, three major surveys were recently published in the United States: The American Jewish Committee (AJC) survey, which is conducted annually and enables monitoring trends over time; the May 2021 Pew Research Center survey of Jewish Americans in 2020 (the previous survey, published in 2013, employed a somewhat different methodology); and a third survey conducted by JAFI, a one off, doesn’t give us a way to look at trends before and after the pandemic but we can use it to sharpen the American picture, particularly in cases where there are discrepancies between the other surveys.

In JPPI’s 2019 Annual Assessment we proposed several indicators to evaluate the relationship between Israeli and Diaspora Jews; among them was the degree to which respondents agreed with the statement, “Concern for Israel is an important part of my Judaism.” AJC Data indicate a continued erosion of agreement with this statement (in 2021, there was a slight rise, from 59% to 60%, but the percentage is still somewhat lower than in 2019 – 62%, and much lower than the 80% seen in 2000). Although there are some methodological issues with comparing the different surveys, the gaps in the responses to this question are noteworthy. JAFI’s research suggests that the rate of agreement with this statement is even lower than seen in the AJC surveys. In contrast with these two, the Pew survey found that the degree to which respondents agreed with the statement was quite high, standing at some 82%. These significant discrepancies require further study. 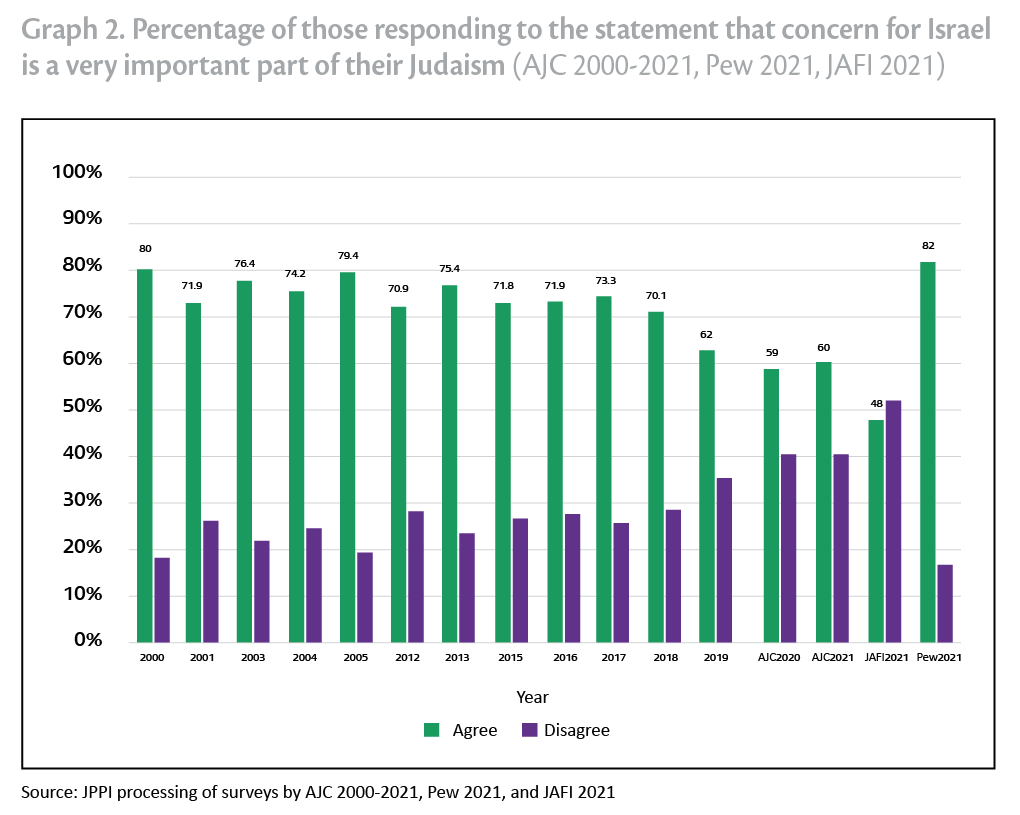 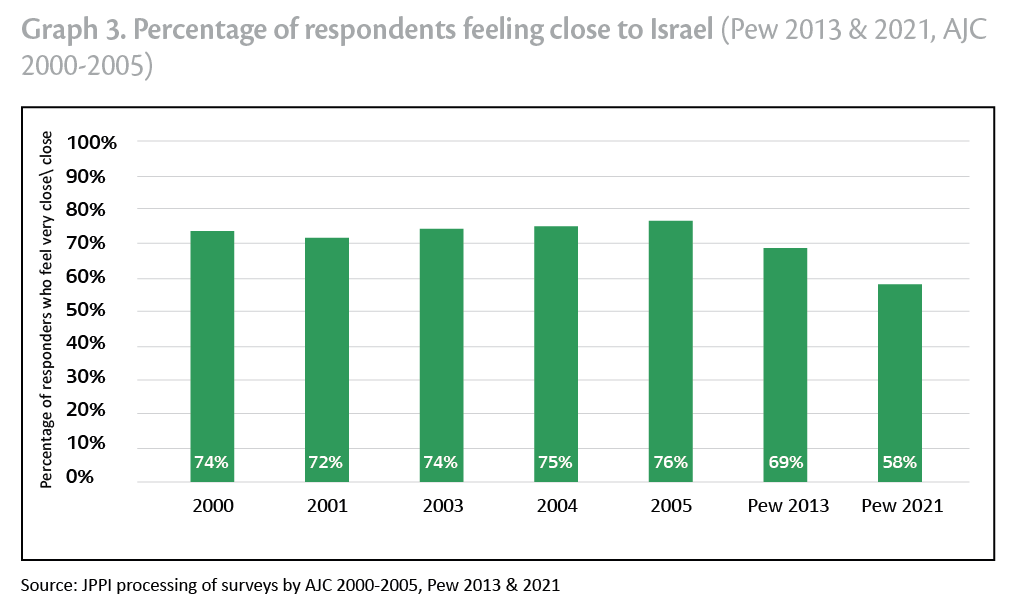 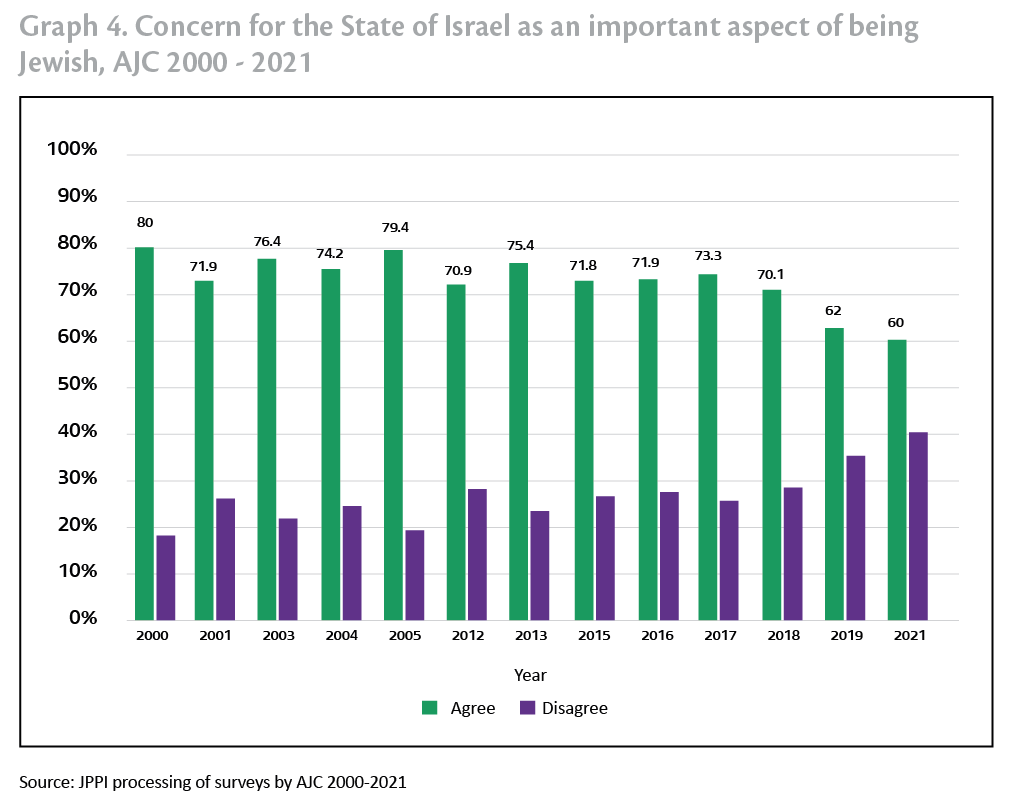 Generally speaking, in all of the surveys we can see that demographic variables, including age and position along the axes of Jewish tradition and political attitudes, have an impact on responses. This is a striking divergence of attitudes between younger and older cohorts. In actuality, comparing the new data to previous data indicates that the trend of erosion is actually observed among the older groups as well. One way or another, the general picture is that among the Jews in Israel the situation is mixed, and perhaps indicates a slight rise in the feeling of closeness to Diaspora Jews. In contrast, among Diaspora Jews, the trend of a waning feeling of closeness, which was evident prior to the pandemic, is continuing.

Did the initiatives that were undertaken during the COVID-19 pandemic prevent an even worse situation? Could better results have been achieved? Has sufficient time elapsed to evaluate their full impact? We should be cautious about drawing solid conclusions based on the partial data at our disposal, but at this point in time there is no evidence that the numerous new programs have reversed the trend of erosion in Israel-Diaspora relations.