Over the past year, Israel witnessed several waves of preoccupation with relations between Haredim and non-Haredim, in the context of daily life (especially around COVID-19 and the Mount Meron disaster), politics (leaving the Haredi parties out of the coalition), and economic and other legislation (the Finance Minister’s decision to cancel child allowances for kollel students). These waves were sometimes marked by harsh sentiments – anger and powerlessness – on both sides (for more on these trends in Israel this year, see page 57).

During the year, several public opinion polls examined these relations, employing “soft” questions such as “To what degree do the Haredim contribute to the state’s prosperity?” and questions of greater bluntness meant to directly assess “anger” or “hatred” toward the Haredi public. The survey findings suggest that the image of the Haredim among other Israelis is quite poor, with a significant percentage of Israelis expressing strong unsympathetic feelings toward them, to the point of “hatred.”

The following graph, based on JPPI surveys, shows that half of Israeli Jews feel that the Haredim make no positive contribution to the prosperity of the state, and that this situation has remained quite static in recent years (Arabs show even less sympathy for the Haredim). The combination of low esteem for the Haredi community’s value to Israeli society, and the sense of helplessness vis-à-vis the Haredi community’s political and organizational power, is what drives subsequent expressions of anger and hatred. 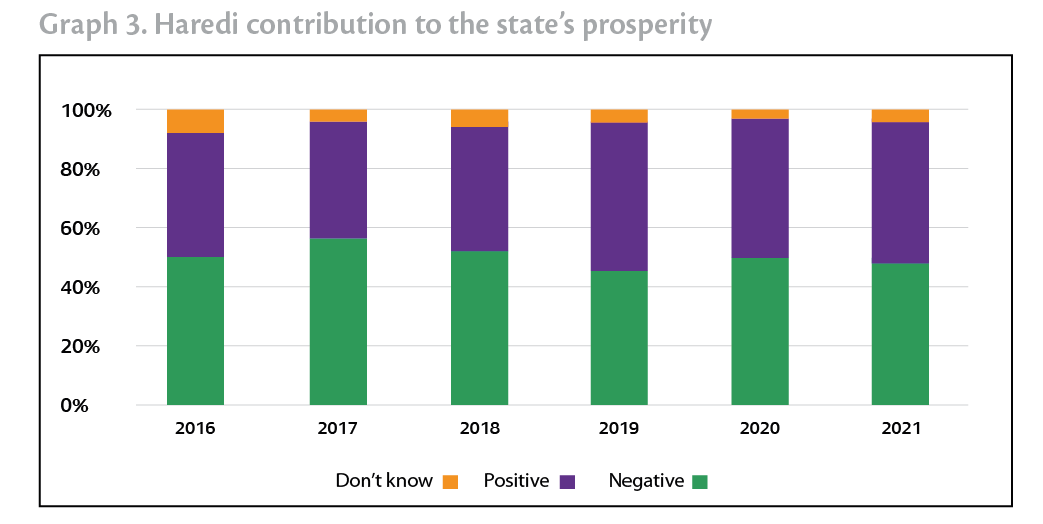 The next graph presents a comparison of two surveys that looked at non-Haredi Jews’ “hatred” of Haredi Jews in Israel. The surveys were conducted at different times, which is important in this context. 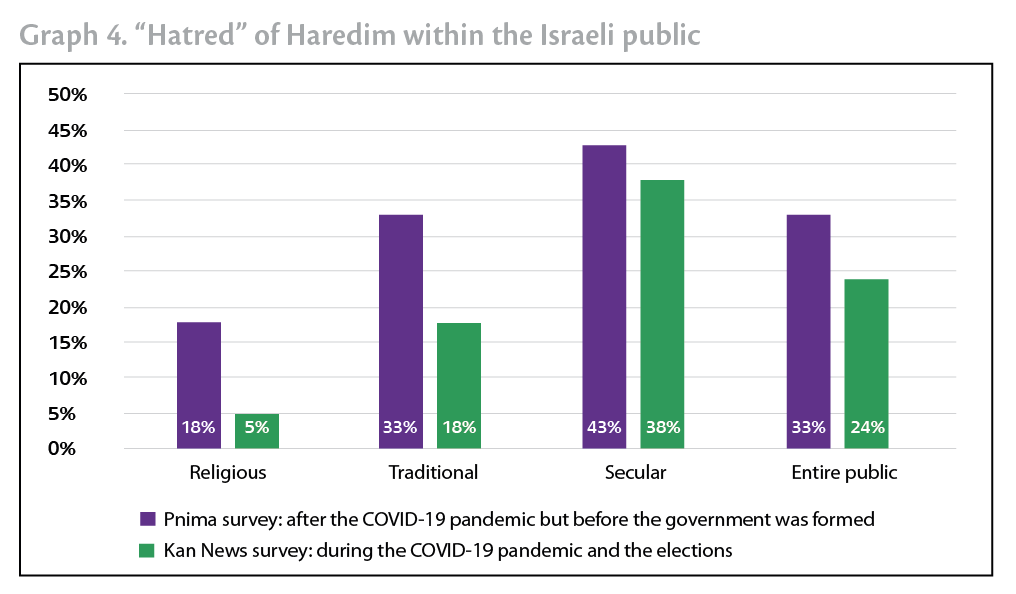 One survey (by pollster Dudi Hassid for Kan News) was conducted during the election season – a period when polarization and social tensions naturally intensify. This was particularly evident in Israel’s fourth round of elections in two years, which took place at a time when the peak of the coronavirus pandemic was fresh in people’s minds. During the pandemic, there were frequent allegations (some of them justified, others exaggerated) regarding the conduct of the Haredi community, its rabbis and leaders, including their low levels of compliance with the state health directives. Morbidity among the Haredim was very high, and the spotlight focused on them cast their leadership in a negative light (among other things, due to its ongoing refusal to impose discipline in the community’s synagogues and close educational institutions).

The second survey was conducted (on behalf of the Pnima movement by pollster Mano Geva) after the new government had been formed – a government that does not include Haredi parties. It was conducted after the pandemic began to show signs of recurrence, but when there weren’t public accusations leveled against the Haredi public. However, even during the weeks leading up to the second survey, a considerable number of incidents highlighted the ongoing conflict between Haredi and non-Haredi Israelis (for example, the aforementioned ministerial decision to cut child allowances, or the High Court’s ruling on gender segregation for Haredi students in academia). Nevertheless, as the data show, this period gave the impression of being somewhat less tense – even though the share of Israelis saying outright that they “hate” Haredim remained high.