Last year, we reported a dramatic rise in the share of Arab Israelis who define their primary identity as “Israeli,” and a concomitant sharp decline in the share who self-identify as “Palestinian.”2 These findings were not reproduced this year, for reasons that are not entirely clear but may stem from methodological differences in sampling. The level of partnership between Jews and non-Jews in Israel was prominent in the public discourse this year, in the framework of the election campaigns. This round of elections shattered old norms by proving the practicability of Arab party membership in the ruling coalition. Concurrent with this development, the past year witnessed an outbreak of Arab violence, primarily in Israel’s mixed cities, during the Guardian of the Walls operation in Gaza. This outbreak greatly sharpened Jewish-Arab tensions, just as a political coalition with both Jews and Arabs was being formed (for more on this topic, see page 58).

Most public discussion on Jewish-Arab relations dealt with the question of active Arab partnership and involvement in the political arena. In recent decades there has been a gradual but highly significant decline in Arab votes for “Jewish” parties, and a shift toward near-exclusive Arab support for parties affiliated with the Arab sector. Thus, most of the discussion took place between parties that directly target Arab voters. The sector’s main party, the Joint List, was challenged by Ra’am, a party associated with the southern faction of the Islamic Movement. Historically, the Arab parties have found themselves, whether unwillingly or by choice, excluded from negotiations to establish and ensure coalition stability. But Ra’am (as well as Arab mayors who have spoken out on these issues) has sought to operate as a party willing to trade its support in exchange for safeguarding the key interests of its constituents. This especially relates to focused and thorough measures to address the problem of violence in the Arab sector, as well as the allocation of budgets for education, construction, and healthcare. This approach ultimately led to the party’s inclusion in the new government. Ra’am, which has four coalition members, is a party without which the coalition would cease to exist and therefore holds great power.

In JPPI’s 2021 survey, conducted a few months before the government was formed, both Jews and non-Jews were asked whether they see a “shared future” for all Israelis, Jews and Arabs, and whether they feel “closeness” to all Israelis, Jews and Arabs. The responses of Jews to this question are clearly split along political lines, with a higher sense of partnership among respondents who self-identify as left leaning. Among non-Jews, Druze respondents express high-level agreement with the “shared future” statement.

Regarding the gaps between Jews in response to the “partnership” and “attachment” questions, an interesting phenomenon can be discerned. While nearly half of the respondents (49%) give the same answer to both questions, a significant percentage (25%) display what we call “hesitant attachment.” These are Jews whose attitude toward “partnership” is more positive than it is toward “attachment,” the difference almost always being one unit of the scale bar. For example: if they “strongly agree” with the statement that there is a “shared future,” they only “somewhat agree” that there is “special attachment”; if they “somewhat agree” that there is a “shared future,” then they “somewhat disagree” there is a “special attachment” – and so on. A possible explanation for this partnership-attachment discrepancy: Jews realize that the Arabs are here to stay and that partnership is necessary, but they have trouble translating partnership into attachment, which has an emotional dimension. Among Arabs there is no discernible sense of “hesitant attachment”; 60% of Arabs gave the same answers to the partnership and attachment questions. 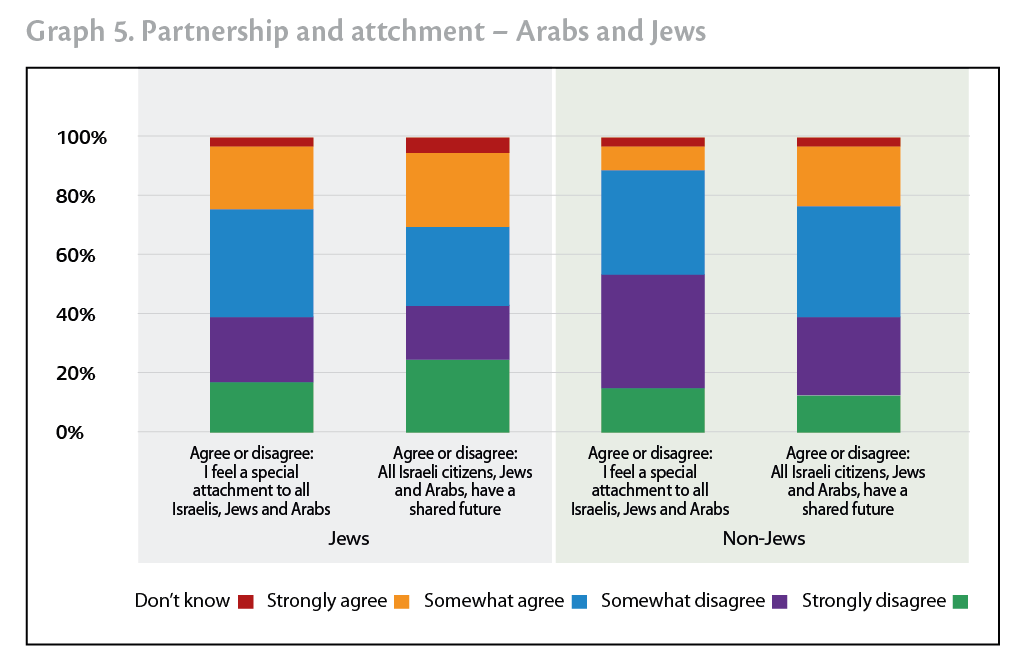 While the new government promotes Jewish-Arab cooperation in various fields, the events in Israel during Operation Guardian of the Walls brought a flood of renewed tension between the sectors. Some viewed the violence primarily as an eruption of socioeconomic frustration. Others tended toward a more dramatic interpretation of the unrest, seeing it as declaration that, as far as the Arabs are concerned, “[t]he artificial distinction between ‘Israeli’ and ‘Palestinian’ Arabs’ is no longer relevant. The bloody events of May 2021 thus underscore the need for Israelis to accept that the question of the 1967 borders is artificial. From the Palestinians’ perspective, including those Palestinians who hold Israeli citizenship, the issue has always been, and remains, the 1948 borders.”3

Nevertheless, surveys conducted some time after the riots indicated no dramatic turning point in Israeli or Arab attitudes. Forty-three percent of Jews say that they consider Israel’s Arab citizens as “people who should be respected, but also suspected”; 31% see them as equal citizens; 20% as potential enemies, and 6% as unequal citizens. A majority of Jewish Israelis (64%) feel that the government should invest in the country’s Arab citizens.4 A survey conducted around the time of the riots found that Arabs are more willing to assume that the rioters – whether Arabs who initiated the events, or Jews who responded violently – are an extremist minority who do not represent the general public’s attitude. Among Jews, there is a consensus that the Jewish rioters were a small minority, but there is no consensus that the situation is the same for the Arab rioters. Eight out of ten Jews agreed that the Jewish rioters were an extremist minority; four out of ten agreed that the Arab rioters were also an extremist minority.5