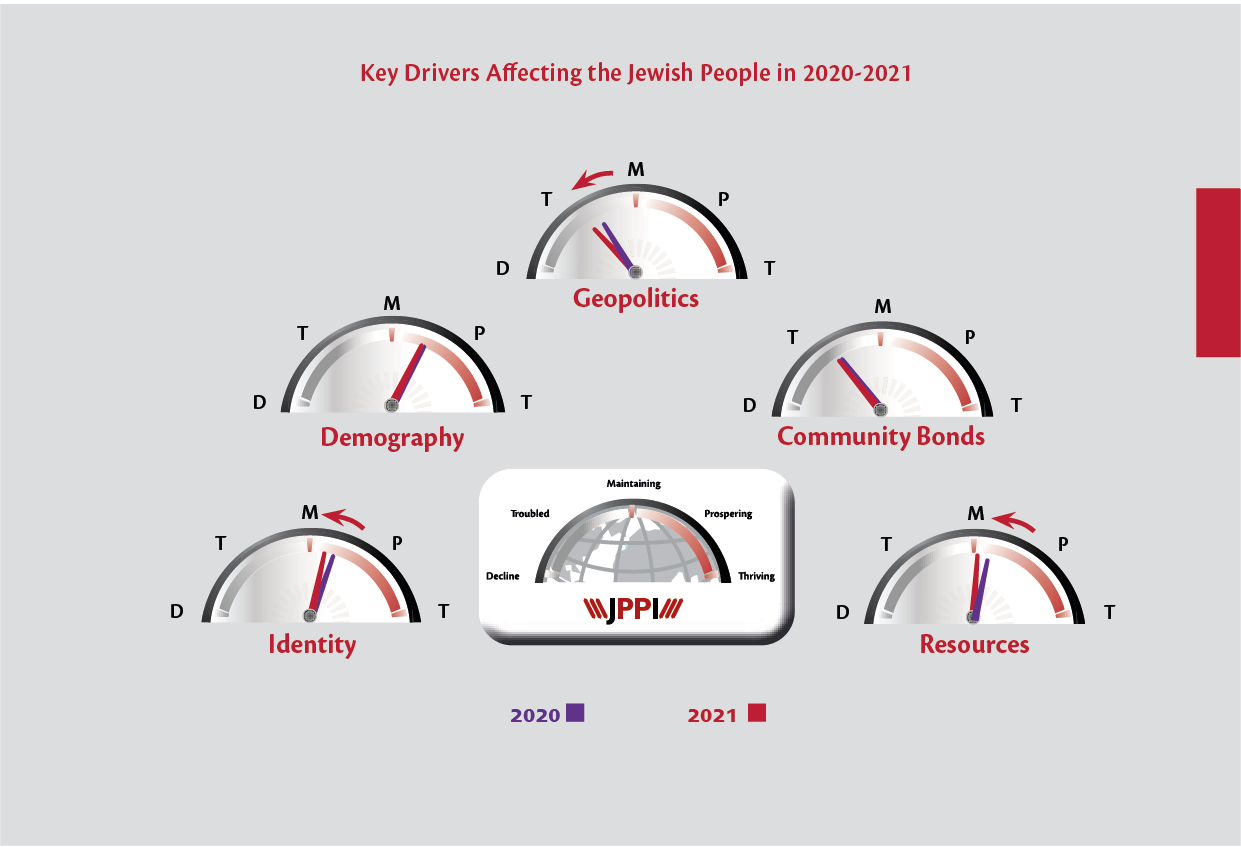 This year the Jewish people contended with, and were affected by, developments in several main areas:
Political changes: Amid great political turbulence, the past year brought changes of leadership in both the US and Israel – the homes of the world’s two largest Jewish communities. These governmental changes affect the resilience of the Jerusalem-Washington-American-Jewry triangle.

Antisemitism: Political polarization on both right and left, and the growing power of extremist factions, have led to a rise in the number of antisemitic incidents. This phenomenon intensified particularly during and after Israel’s Operation Guardian of the Walls in Gaza. The beginnings of a “Europeanization” of antisemitism is discernible in the US and could drive a trend toward the isolation of American Jews.

The COVID-19 pandemic: Jewish communities worldwide (and the State of Israel) are facing yet another wave of the pandemic. It is too early to tell how this will affect global efforts to return to a normal commercial and social existence. One can see Jewish communal changes in response to the pandemic – in particular, a shift to remote activity. These changes will likely have a long-term impact on the format of the communities and their activities.

Geopolitics: Israel continues to face two major security and diplomatic challenges. In the Iranian arena, the Biden administration is seeking to return to the 2015 nuclear deal (JCPOA), to Israel’s displeasure. In the Palestinian arena, the past year witnessed another round of violence between Israel and Hamas in Gaza. Beyond that, the pandemic and other factors have undermined stability in many Middle Eastern countries.

Polarization and society: Polarization deepened markedly in Israel this year. Arab Israeli rioting, mostly in the mixed cities, and Jewish counter-rioting, testified to the relative fragility of relations between Jewish and non-Jewish Israelis. Tensions also ran high between Haredim and non-Haredim, against the background of the COVID-19 pandemic and in the wake of the Mount Meron disaster.

Jewish identity: Data from the United States indicate widening cultural gaps between different segments of the Jewish population, particularly among the younger generation. A rise in the population share of Orthodox Jews, and a concomitant rise in the percentage of “Jews of no religion” (Jews who identify as cultural or ethnic Jews), is creating a reality of widely divergent beliefs and behaviors between Jews from different groups. At the same time, the share of “mainstream” American Jews, who had been the core of the community during its boom years in the 20th century, has declined.