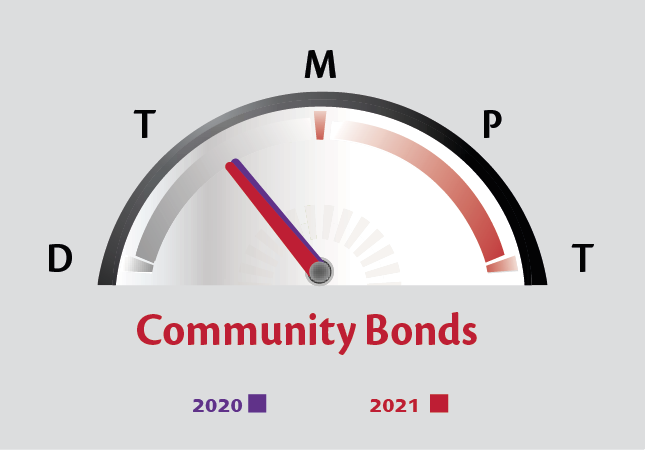 The COVID-19 pandemic caused a forced distancing between Jews, both within individual communities and between different communities. At the same time, political and social polarization also affects Jewish population groups, making it difficult for them to engage in dialogue. At the same time, the antisemitic discourse prevalent in many countries is bringing communities together, based on a shared interest in curbing the phenomenon. Israel’s recent change in government presents an opportunity to turn a new page in inter-community relations on several different levels, as the cumulative impact of previous governments fades. Within US Jewry, the share of Jews with weak ties to Israel is growing.
Based on the above, we have left the Community Bonds gauge unchanged.

Israel should (to the best of its ability) assist in preventing further polarization within American Jewry.
Explanation: The Pew report, Jewish Americans in 2020, points to an alarming trend within US Jewry: a growing polarization in regard to Judaism and Jewish identity, particularly among the younger generation. This widening polarization is a significant departure from the American Jewish identity of the 20th century and may be characterized as follows: 1) an Orthodox Jewish identity; and 2) “Jews of no religion.” According to the data, it appears that Jews of no religion do not hold the “sacred” commitment to Jewish continuity and solidarity. There are also signs that the Haredim are moving in the direction of factionalism, with only those who adhere to Halacha, being considered “true Jews.” If these trends continue to deepen among the younger generation of Jews, polarization will increase and cooperation within the US Jewish community will become harder. Israel can play a role in helping the American community find ways of reversing this trend; at the same time, it should avoid measures that could exacerbate the polarization.

The formation of the new government should be utilized as an opportunity for renewed dialogue with disengaged (mostly liberal) sectors within American Jewry.
Explanation: Studies by the Pew Research Center and the Jewish Agency indicate an erosion of the sense of connection young non-Orthodox Jews in the United States feel to Israel (the US significantly differs from other Jewish communities around the world, whose ties to Israel seem to be strengthening). This erosion stems from a variety of factors, not all of which are subject to the government’s control, and many of which cannot be addressed by the government. However, the erosion can also be traced to Israel’s image as shaped by its governments of the past decade. The new government has the opportunity to correct this image through measures already undertaken that will change the status quo on matters of religion and state, as well as through dialogue.

The US communities should employ educational means to strengthen young Jews’ identification with the Zionist narrative.
Explanation: New data and controversial statements made over the past year point to the existence of a sizeable, and likely growing, group of young American Jews who question the very existence of a Jewish nation state. This development constitutes a strategic problem in Israel-Diaspora relations, and must be urgently addressed, first of all via the means available to the organized Jewish community and, where necessary, with Israeli assistance. It is worth noting that increasing reports of such a trend may also sabotage the sense of connection young Israelis feel toward American Jewry.

Israel should devote thought and resources to strengthening digital/remote interaction with Diaspora Jews.
Explanation: The COVID-19 pandemic has accelerated the trend toward online activity. In a number of areas, there seems to be no going back. In the Jewish world, such a development could affect the way organizations and movements conduct themselves. For example, joint learning, conferences, and content-based events may continue to be held virtually. Institutions involved in strengthening Israel-Diaspora relations should therefore prepare for the possibility that there will be no “return to normal” in terms of visits, gatherings, and other events on the same scale as in the past. Thus, in parallel to preparing for the earlier norm, these institutions should also devote some energy to identifying and initiating other options for deepening the relationship. The digital dimension actually opens up many possibilities for continuous, trans-continental interaction.