For the past few years, Israel has been subjected to one round of elections after another, which negatively affects both the ability of each successive government to carry out long-term policies and the public discourse. Simply put, election campaigns are times when the country’s leadership has an interest in sharpening ideological differences – real or imagined. It encourages polarization between societal groups and characterizes the Israeli reality as an “us” against “them” binary to serve political interests. This picture should be taken into account when examining new data collected this year on the state of identity and society in Israel, some of which will be presented in this chapter.

The past year elapsed without dramatic crises apart from the upheaval in the political system. Key issues of public concern included the cost of living, especially rising housing prices, and Jewish-Arab relations, against the background of the Ra’am party’s membership in the governing coalition, which gave rise to political disputes and crises. Like the rest of the world, Israel monitored with concern various destabilizing global developments, first and foremost the war in Ukraine. The war obliged the Israeli government and the Israeli public to face the issue of how to balance Israeli interests with the needs and interests of the Jewish people, both in terms of opening Israel’s gates to refugees, and in the context of Israel’s political position vis-a-vis Russia and Ukraine during the war.

Israel did not make much progress this year toward resolving the main challenges facing the country, including the confrontation with Iran, the Israeli-Palestinian conflict, the economic-social challenge posed by the growing ultra-Orthodox community, complex problems of infrastructure and construction, and more. No progress at all was made in solving the fundamental problem underlying the difficulty of forming a stable government, namely, the split into two main camps unwilling to sit together in a coalition due to differences in ideology, style, and language, as well as interpersonal issues.

In this chapter, we will discuss several insights that emerged this year, based primarily on JPPI research, with regard to three issues:

One finding of JPPI’s Pluralism Index provides an instructive illustration of the difficulty of forming a stable governing coalition in Israel.1 It is this difficulty that led to the formation of the current Bennett-Lapid government, whose very composition presaged its swift demise. The pressures created by the joint participation of fervent ideological opponents in a single coalition ultimately swayed the coalition members, both those at the “right” pole of the coalition political spectrum, and those at its “left” pole – mainly Arab members of the Knesset. 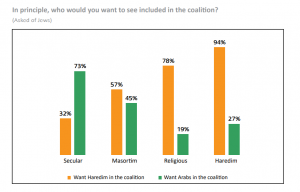 The particular finding in question relates to the two major minority groups represented in the Knesset, and how each of them is unacceptable to large swaths of the Jewish electorate. The graph below illustrates that some Jews want no part of a coalition in which Israel’s growing ultra-Orthodox minority is represented, while other Jewish sectors want no part of a coalition in which the large Arab minority is represented. Given this reality, and the fact that the main political parties of the Jewish majority are unwilling to sit together in a coalition, the sole possible coalition is one with a conspicuously divisive composition – right-wing parties with ultra-Orthodox parties, or center-left parties with support from the Arab parties (or some of them). Such a composition invites tremendous internal pressure to institute policies that aggravate social discord, due to the great dependence on parties that represent minority groups. It also forestalls any possibility for a broad coalition that would have a chance of surviving the political pressures for an extended period of time.

The past year marked a possible turning point with respect to Arab Israeli involvement in the political arena, following the Ra’am party’s joining the governing coalition. The possibility was overshadowed by strong opposition on the part of the right-wing parties, which cast doubt on the legitimacy of a government relying on the votes of Ra’am representatives, some of whom have a history of statements and actions that are unacceptable to most Israelis (including expressions of support for terrorists), as well as on the part of the main Arab party, the Joint List, which viewed Ra’am’s coalition participation as acquiescence to an agenda that sidelines the unresolved Israeli-Palestinian conflict.

Given these objections to the Bennett-Lapid government (on the part of the opposition), and the support given it by those who saw it as a “rescue government” after four election cycles with no clear victor, it is not hard to understand why Jewish and Arab positions have become more polarized, and why the camps have found it increasingly hard to understand each other. Thus, the share of Jews who think that only “very few” Arabs are “politically extreme” has risen sharply, as Israel’s center-left has demonstrated an increased willingness to tolerate positions common within the Arab sector, and to entertain the possibility that the confrontational discourse prevalent in the political arena does not accurately reflect that sector’s sentiments. At the same time, among Arabs observing the opposition’s efforts to delegitimize the government, there has been a steep rise in the tendency to paint large swaths of the Jewish public in shades of “political extremism.” 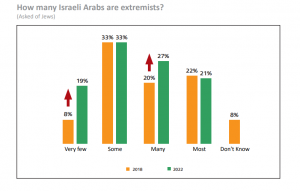 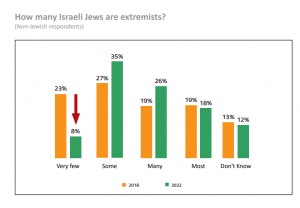 Another illustration of the overall trend can be seen in the data pertaining to violence in the Arab sector. The level of violence in Israeli Arab society is high, and an effort was made this year by the government and the police to deal with this challenge with greater resolve than in the past. In the pluralism survey we sought to examine the causes (according to the respondents) of the ongoing violence in the Arab community, which manifests in high murder rates, theft, extortion by protection rackets, and more. Survey respondents were asked to rank four options. Two options attributed most of the responsibility for this situation to state entities (the government and the police) that have failed to address the Arab sector’s needs, both in general (neglect) and in concrete terms (fighting violence). The other two possible reasons presented to respondents – Jews and Arabs – focused on internal characteristics of Arab society, placing the responsibility on “the public” or, more generally, on Arab “culture.”

The responses starkly represent the divergent or even contradictory perspectives of Jews and Arabs on the social reality of Israel’s Arab community, as well as the range of views held by the Jews themselves, based on their ideological-political affiliations. While a majority (albeit a small one – 51%) of Jews saw key internal factors of Arab society as the main drivers of the violence, a very substantial majority of Arabs (nearly 80%) placed the responsibility on the state. While a high percentage of Arab respondents laid the blame on the government and the police, Jewish respondents were divided, with their answers distributed along a political scale. A very large majority (82%) of left-leaning Jews said that state neglect was the primary factor behind the Arab sector violence. By contrast, a significant majority (61%) of right-leaning Jews said that the violence is “a cultural issue of the Arab sector.” A breakdown of internal versus institutional factors shows the left focused almost entirely on failures of the state establishment (92%), while the right (77%) placed the blame primarily on the Arab sector and its culture (centrist voters are divided fifty-fifty). 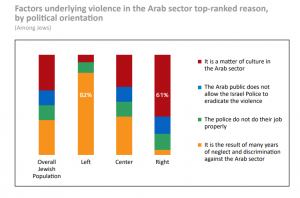 The war in Ukraine has created an array of policy dilemmas for Israel, which require it to navigate issues pertaining to its relations with other countries, the security interests it needs to safeguard, its image as a country, immigration and absorption issues, and more.2 These dilemmas have provided an opportunity to address the larger questions of balancing “moral” and “realpolitik” considerations in Israel’s conduct, and to examine the Israeli public’s attitudes toward the appropriate balance in these matters. Ahead of a JPPI conference on this topic in early June 2022, a public opinion survey was conducted to determine what Israeli Jews think about a number of questions pertaining to morality and policy, both in its general principled aspect and in terms of specific dilemmas presented to them in the survey. This study produced a number of findings:

A large majority of Israeli Jews feel that Israel is a moral country and that the IDF is a moral army; a large majority believe that in foreign and defense policy, interests and moral considerations must be balanced. However, the more prevalent preference is for a balance that prioritizes interests over morality. There is a clear connection between political views (right-leaning) and the assessment that Israel is a moral nation; there is also a significant relationship between political views (left-leaning) and a preference for moral policy. Most feel that the main lesson of the Holocaust is the need for determination in protecting Jewish lives. Those whose preference derives from Israel being a “Jewish state” tend to prefer interests over morality.

Of all of these findings, we will now focus on the last. This finding shows that Jewish consciousness in the context of Israel’s identity is connected with a tendency among Israeli Jews to prioritize interests over “moral considerations.” In essence, it indicates that, for Israeli Jews, the most important consideration (and in their view, the prime “moral” consideration) is protecting the security and lives of Jews. The same finding can also be inferred from the practical interpretation given by Israeli Jews to the notion of “lessons of the Holocaust.” More respondents chose as a key lesson of the Holocaust “the need for determination in protecting Jewish lives” (51%) than chose the option of “special sensitivity to violence against innocents” (32%). 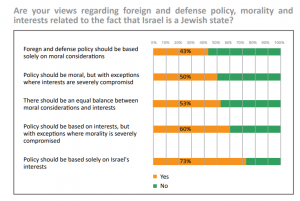 1. All of the findings of the Jewish People Policy Institute’s 2022 Pluralism Index, as well as other data from thesurvey, can be found on the JPPI website https://jppi.org.il/en/article/pluralism2022/#.YwHqMuxByCc.

2. The data in this subsection are taken from: Should Moral Considerations Be Brought to Bear in Foreign and Security Policy? Attitudes of Israeli Jews. The relevant JPPI survey findings and an analysis of them can be found at: https://jppi.org.il/en/article/morals-interests