A number of reports this year have noted the persistence and growing severity of antisemitic phenomena in many countries.1
Two significant events influenced the general manifestation of antisemitism in the last two years: the escalation of the Israeli-Palestinian conflict, peaking during “Operation Guardian of the Walls (May 2021),” and the continuing Covid-19 pandemic.

Attitudes toward Israel are affected by rising antisemitism, as well as by political polarization, especially in the United States. As a result, young Jews are lowering their Jewish-Zionist profiles in an attempt to maintain their social status among their non-Jewish friends.3

American college campuses remain hotbeds of anti-Israel, anti-Zionist activity, putting Jewish students on the defensive. At the same time, there is controversy in the Jewish community, especially among the younger generation, over the meaning of “anti-Zionism” in the context of antisemitism.

Social media continues to constitute a pivotal platform for the dissemination of antisemitic discourse, ideology, and tropes, and for antisemites to interact with one another. The actions taken by the social media networks against this phenomenon to date have not reduced it significantly. Only a coordinated international effort can press the platforms to set norms to diminish the hate speech they host. 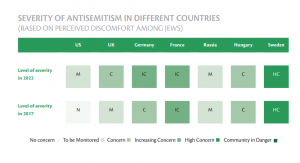 White supremacists – 2021 saw a major increase in far-right extremist activity, with a near-doubling of exposed white supremacist propaganda efforts,4
and a significant broadening of reach and influence.5

Normalization of the antisemitic discourse – Antisemitic discourse is becoming normalized and is penetrating mainstream national politics on university campuses and on the street.6
There has been a clear rise in anti-Israel or anti-Zionist expressions from progressive groups that have significantly crossed into antisemitic territory.7

style=”direction: ltr;”>High-profile positions taken by American Palestinian and Muslim leaders, organizations, and initiatives have also contributed to an environment that legitimizes anti-Zionist and anti-Israel rhetoric, and sometimes antisemitism itself.

Jewish privilege in progressive discourse – Identity politics in the progressive discourse places Jews into the “oppressors” camp (white skin color, social privilege, and power). On this basis, Jewish support for Israel is sometimes equated with complicity with racist policies. Interpretations of the Israeli-Palestinian conflict through prisms of American racial dynamics enhance the resonance of charges of Israeli apartheid, which the release of an April 2021 Human Rights Watch report bolstering the apartheid claim has helped amplify.8
Significantly in this context, the percentage of scholars who described the Israeli-Palestinian conflict as “a one-state reality akin to apartheid” increased from 59% in February 2021 to 65% by September.9

Jewish communal disunity – While much of the Jewish establishment urged the incoming Biden administration to make adoption of the IHRA definition of antisemitism a national priority, key progressive Jewish groups lobbied the administration against its adoption.10
Jewish anti-Zionists play increasingly prominent roles in left-wing policy and discourse arenas.

Behavioral changes – According to the American Jewish Committee: “Many American Jews have changed their behavior, limiting their activities and concealing their Jewishness due to concerns about antisemitism. Four out of ten American Jews say they have avoided posting content online that would reveal their Jewishness or their views on Jewish issues, and 22% refrained from publicly displaying Jewish items. Younger Jews were significantly more likely to have changed their behavior due to concerns about antisemitism, with more than half (52%) of those between the ages of 18 and 29 saying they had taken steps to conceal their Jewishnesss.11
The situation is more extreme in Europe: 20% of French Jews have experienced physical assault; 37% say they feel insecure “often” or “from time to time”; and 45% of Jewish parents in France ask their children not to disclose their religion.”12

In France, political Islam intersects with progressive fringes. A primary source of antisemitism emanates from the extreme left fringe and often conceals itself behind the mask of human rights and egalitarianism. The growing recognition of the cardinal role of Islamist antisemitism in the resurgence of Judeophobia is challenged by “woke” ideology and the intersectionality movement, which jumped from academic theory into left-wing political activism. This ideology incorporates a post-modern corpus of theories, a fusion of the Frankfurt school’s neo-Marxist ideas and the “French theory” that garnered considerable academic truck in the United States beginning in the 1980s. The common fight against imperialism, colonialism, capitalism, and widespread class stratification has thus manifested itself in a convergence of struggles between the radical left and radical Islam, and has in some cases translated into virulent antisemitism. The Jewish state is frequently described by activists in these movements as the last bastion of colonialism, an evil entity that should be dismantled. This is often accompanied by age-old antisemitic tropes, creating a hostile environment for Jews.13

At the same time, in some left-wing circles, Muslims are perceived as the new proletariat that should be protected because of their supposed systemic victim status. By contrast, Jews are seen as the embodiment of a systemically dominant group, a privileged capitalist bourgeoisie. In the neo-Marxist paradigm, racism is considered systemic and institutional, and seen as a function of class struggle. Within this conceptual framework, antisemitism may not be considered “racism” since dominant class groups cannot be victimized or subjected to discrimination.14

In Britain, Jewish communities perceive a lack of support in combating antisemitic phenomena, particularly within progressive left circles. British Jews grapple with a frequently imposed framing of Jews in progressive discourse. This framing is an obstacle to fighting antisemitism and contributes significantly to failures to recognize and stand against antisemitism among the broader left. Overall, 18% of British Jews reported feeling somewhat or very unwelcome in the UK.15

In Germany, it turns out that a quarter to a third of the general population openly or implicitly agree with antisemitic clichés. For example, 30% of all participants and 59% of the far-right AfD party’s supporters agreed with the statement: “What Jews are doing with the Palestinians today is nothing other than what the National Socialists did with Jews.” Moreover, 40% of Jewish respondents reported having been disadvantaged, marginalized, or threatened in one way or another over the past year. Jews living in Germany often feel they are held accountable for Israeli policy vis-a-vis the Palestinians and that the conceptualization of Israel as the “collective Jew” has become the identificational basis for regarding and judging all Jews.16

The three dimensions of JPPI’s Antisemitism Index look at: 1) antisemitic attitudes; 2) antisemitic incidents; and 3) Jewish confidence in their home country. There was no significant change in the first dimension this year but the number of incidents (the second dimension) and the level of anxiety among Jews (the third dimension) spiked. This decline in confidence reflects the seriousness of the anti-Jewish incidents that occurred during the year. 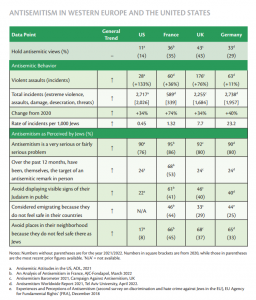 A first-ever EU strategy on combating antisemitism and ensuring the future of Jews in Europe was presented by the European Commission in October 2021. Further, the German government decided to invest 35 million Euros in research and educational projects focused on understanding the causes of antisemitism and how to effectively combat it. Yet, European Union member states are at the same time pressing ahead with legislation to prohibit kosher slaughter, with the backing of the European Court of Justice. Jewish communities have expressed concern that this trend – extended to male circumcision and other rituals – may render Jewish religious life on the continent impossible.

The American administration appointed its Liaison to the American Jewish Community (Chanan Weissman), its Special Adviser on Holocaust Issues (JPPI’s co-chair Stuart E. Eizenstat), and its Special Envoy to Monitor and Combat Antisemitism, with the rank of ambassador (Prof. Deborah Lipstadt). Although all three positions existed prior to the Biden presidency, these appointments came in the wake of a campaign five major Jewish groups led in reaction to the May 2021 surge in antisemitism.

Against the backdrop of “Operation Guardian of the Walls,” the number of antisemitic incidents reached new heights around the world. A positive exception was France, where the government adopted a preemptive policy to prevent attacks on Jews during the May 2021 conflict.

The working definition of antisemitism established by the International Holocaust Remembrance Alliance (IHRA) and the examples it comprises, continue to prove a vital tool in identifying and combating antisemitism. To date, 839 countries, organizations and institutions have adopted the definition. A quarter of them did so in the past year. Morocco ratified the IHRA Charter, and the content of school textbooks was changed in Qatar, Morocco, and Egypt accordingly. In several countries (Morocco, Bahrain), Jewish sites have been restored, and Jewish communities are being established in the Gulf states.

38 countries boycotted this year’s United Nations World Conference Against Racism in Durban, on the grounds that it had become a platform for the “new antisemitism” and anti-Zionism.

Conclusions and Directions for Action

Antisemitism on both the left and the right, continues to erode Jewish security. JPPI reports have been warning for several years of the possibility that the trend of resurgent antisemitism is on the rise and rooted in deep societal currents of varying sources. The return of antisemitism could become a long-term fixture of global discourse, while the ability of Jewish communities and Israel to influence it is limited. Under these circumstances, Israel, as the world’s strongest Jewish organizing force, cannot confine itself to attempts to “fight antisemitism.” Israelis must understand what it will mean to live in an era when antisemitism is a persistent factor in Jewish life, and prepare for that era accordingly, while formulating plans for appropriate explanatory, diplomatic, and security activity. The strategy to be built should be coordinated with other international bodies and formulated with clear and measurable objectives for battling antisemitism.

Last year we recommended that the government “entrust the response to antisemitism to a single integrative body with powers and implementation capabilities.” We reaffirm this recommendation, and with greater urgency, in light of data whose meaning is unmistakable.

1. Antisemitism Worldwide Report 2021, Tel Aviv University, April 2022. The report refers to the different national reports. Criminologists argue that the real numbers of incidents are five to ten times higher than reported. Figures regarding France illustrate the fact that most French Jews do not report the incidents.

7. Jonathan Greenblatt, “Antisemitism on the left is subtler than on the right. But it’s getting worse.” The Washington Post, October 27, 2021.

12. An Analysis of Antisemitism in France, AJC-Fondapol, March 2022.