Jewish Creativity Across the Ages – What About the Corona Age? 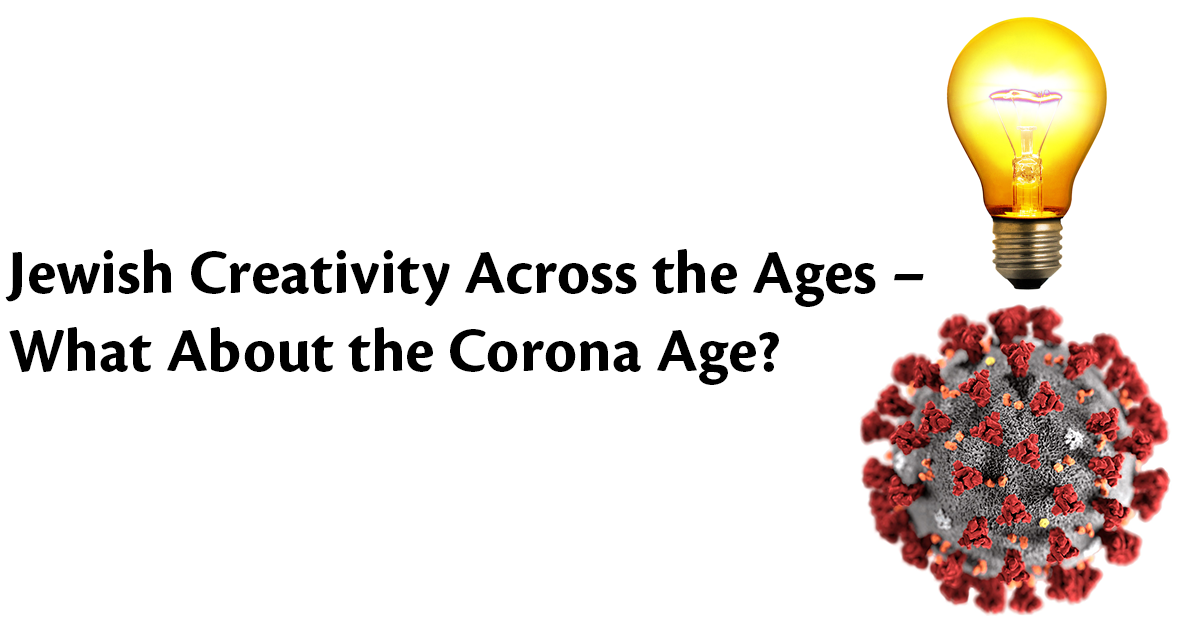 Creativity means change and innovation, generating new products and ideas. In modern times, Jewish creativity exploded when discrimination ended, but creativity existed even in biblical times. Anxiety, education, and multicultural views are drivers of creativity. The COVID-19 pandemic and anti-Semitism are now increasing anxiety and are, thus, likely to boost Jewish creativity.

The COVID-19 crisis could have major, transformative consequences for the whole world as well as the Jewish people and Israel. If Jewish history is a guide, the pandemic could boost Jewish creativity in many fields, like no other single event since World War II and the Shoah.

What is creativity? Definitions abound. Creativity is the mother of change and innovation. It is the will to generate new ideas and products by combining knowledge from many different sources. At its most basic level, creativity is a biological concept. All life forms seek longevity, individually or as a group. As the environment is always changing, life must keep adapting. Animals have changed over 500 million years, not only to cope with new climates but also to avoid being eaten by other animals.  Biologists regard predation as a key reason for animal evolution. Far-fetched? “Predation” in a wider sense can explain much human creativity too.

However, there are examples when creativity also meant immobility. Rejecting change could sometimes guarantee longevity, as long as the environment was exceptionally stable and enemies, most of the time, far away. Pharaonic Egypt is a phenomenal example. It went almost 3300 years, without revolutions in its religion, language, writing, art, economy, or governance. But when ancient Egypt met radically different global civilizations, Hellenism, Rome, Christianity, it crumbled fast. It left impressive ruins but no living traces. Parts of ultra-Orthodox Judaism are another, closer example. From the 18th century on, it strove for permanence by obstructing change. But when a murderous enemy confronted them, they were unable to grasp reality and flee while many still could. Nearly all identifiably Orthodox Jews under Nazi occupation perished. Today’s Israeli Haredim claims to follow the East-European model; their refusal to change is a risky survival strategy.

Is creativity a historical Jewish attribute? There is an old debate about this question, conducted under different names. “Creativity” is a 20th century term. Before, it did not exist in the English language lexicon. In ca. 90 CE, Flavius Josephus argued against the Egyptian anti-Semite Apion, that the Jewish religion was superior to all others. The Jews had produced the world’s greatest philosophers. He praised the Jews for their greater “creativity,” but in his Aramaic and Greek, “creation” was limited to divine, not human action.

In 1919, the American sociologist Thorstein Veblen published a research paper, “The Intellectual Pre-Eminence of Jews in Modern Europe.” Intellectual pre-eminence is a key condition of creativity. However, asserting that Jews had more of it than others was not advisable. A broad discussion that was already underway continued under a more innocuous title. “The Jewish Contribution to Civilization” became an academic and popular issue.

The late 19th century saw a battle among Christian and Jewish scholars about the “originality” of the Hebrew Bible. For example, did the Jews invent the seventh day of rest, the Sabbath, as they claimed, or did they take it from the Babylonians, as German and English Protestants tried to prove? Was there something innate to the Jews, to their mindset or genetics, that could explain long-term creativity? Or did similar external conditions across centuries produce similar results? Answering these questions is difficult because the definition of creativity is flexible and value-based. Today everybody values the seventh day of rest. But this was not always so. The Roman philosopher Seneca scorned the Jews for their religion that wasted, according to him, 15 percent of their life.

What can be assessed with relative objectivity is the long duration of a civilization, the catastrophes it had to endure, and whether essential components of beliefs, religious practice and language survived these breaks. By these criteria ancient Israel, Judaea and the Jewish people can be called a continuous, “creative” civilization. This civilization re-emerged, profoundly modified, after two catastrophic breaks, the destruction of the First and the Second Temples. Judaism finds itself today in midst of a third, still ongoing break that peaked so far in the Shoah and the creation of the State of Israel.

From the mid-20th century on, a renewed stream of publications on “Jewish contributions” in general or in specific fields, has focused on modern times. Many of these were apologetic responses to anti-Semitism.  Statistics citing that a quarter or more of all Nobel Prize laureates have been Jews are endlessly repeated.  Yuri Slezkine’s 2004 book, The Jewish Century, is widely read.  What publications on “Jewish contributions” have in common is that they all regard Jewish creativity as a specifically modern phenomenon.

Creativity in Europe was prompted by the Emancipation, the march “Out of the Ghetto” (Jacob Katz) when hitherto closed professional avenues opened to Jews, and in the United States, by the removal of socio-economic and educational discrimination after 1945. When the Jews’ pent-up demand for recognition and success was released, their creativity exploded in all directions. Thorstein Veblen had concluded that Jewish “pre-eminence” would disappear together with their discrimination. Once Jews got equal rights, including their own state, they would no longer need to excel and would become like everybody else. Zionism’s victory (written in 1919!) would put an end to Jewish creativity. So far there has been no end to Jewish creativity, nor to the pressures that drive it.

Drivers and Conditions of Creativity

Creativity is a gift of exceptional persons backed by a public or a ruler. It is stimulated by contact with other creative persons. A “creative country” is a country that has some creative persons. They tend to appear just before, during and after major historic changes. Studying their biographies is difficult in ancient times but easier in modern ones. A number of psychological and sociological conditions are encouraging creativity.

the destruction of the First Temple asked questions. Why, why? The most  famous book written by a Shoah survivor, Primo Levy’s Is This A Man? asks question after question (1947).  Even its title is a question.

This list of drivers and conditions is not exhaustive. Not all knowledge is acquired in the classroom. Some is sub-conscious and can appear in sudden inspirations. The Renaissance biographer Vasari describes how Leonardo Da Vinci waited for hours for inspiration before he began painting. Also, intelligence has been omitted as a condition of creativity. The issue is politically explosive. Apparently half of intelligence is hereditary; more than 40 genes can be linked to it. For the Jewish people and in Israel, the anxiety factor – its symptoms are visible –  has returned as a powerful potential driver of creativity. As if the pandemic was not enough, the global rise of anti-Semitism is challenging peace and security in the Diaspora, while threats to Israel’s existence have never disappeared.  Also, the employment crisis will emphasize the importance of education, the first enabling condition of creativity. Crises stimulate creativity. This is already clear in the medical and pharmaceutical fields where new Israeli and Jewish contributions to science, innovation, and health care are widely recognized. The COVID-19 challenge could also play a role in the remarkable expansion of Israel’s high-tech sector in the disaster year 2020, and the unbroken growth of Israel’s high-tech exports. Networking and cooperation in science, technology, and finance kept increasing globally and in the Jewish/Israeli world – a bonus for high-tech. Culture is suffering. It will take many years for creative impacts of the crisis on literature, the arts, music and movies to emerge, and maybe longer for the political consequences to play out. The public’s disaffection with politics is worsening. An ultimate victory of Israeli creativity would be the overdue reform of its political system.

True creativity is a mystery. There are no policies to generate it if it does not exist, but if it does, policies can identify, encourage, and reward it. The Israeli military has a policy of identifying brilliant mathematics and physics students at pre-university levels and channeling them into the country’s defense sector. The army’s high-tech graduates are building Israel’s economic future. This is a creativity policy in everything but name. Israel needs a broad creativity policy not limited to technological innovation, in order to strengthen Jewish/Israeli hard and soft power. There are two questions: What must we measure when assessing creativity, and how do we measure it? Answers could substantiate our suggestion that new COVID-induced anxieties are greatly increasing Jewish creativity. A proven fact or a convincing hypothesis?