Let’s Talk – Discussing the Future Among the Jewish People

A culture of to-and-fro is not only respected in Jewish custom, it is positively sanctified. . .We know we are not weakened by debate; we are strengthened by it.

Today, however, I fear this is a lesson we need to learn afresh. 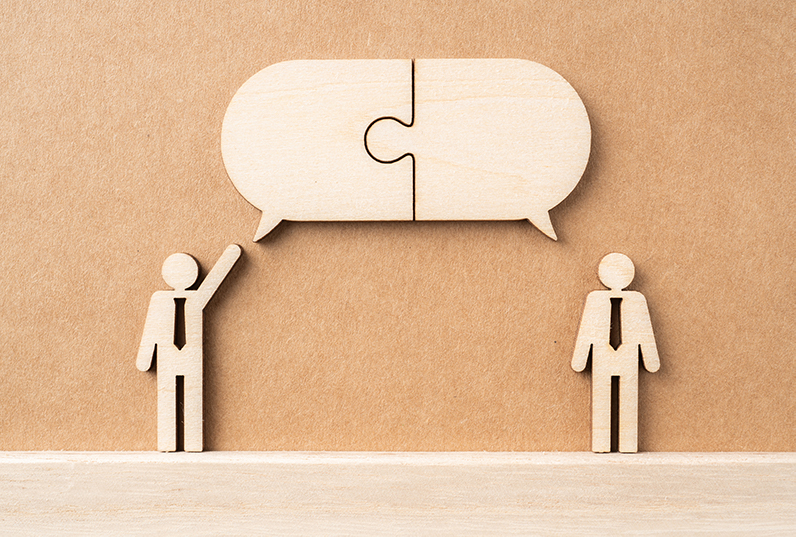 Talmudic discourse shows that Jews are encouraged to ask questions; the Passover haggadah provokes them. President Rivlin fears this lesson has been lost – and little wonder. Few things provoke more anxiety — and therefore categorical statements of belief — than an unknown future. Drawing from experience in other settings in which stakeholders holding different beliefs (and interests) nevertheless determine (or are forced to conclude) that they are better served by working together, several principles might make it possible for different Jewish communities and streams to meaningfully achieve common purposes – even when they disagree on fundamental assumptions.

Secondly, it is futile to argue over strategies without clarity about what they are intended to achieve. Confusion between means and ends emphasizes differences, not commonalities. What would a successful future outcome look like?

This would appear to doom the project from the onset because Jews disagree about so much. Actually, many of these disagreements are about the steps along the way. There is, in fact, large agreement on the most important goals (see Appendix).

Upon a shared vision, much may be built.

What are its core components and how far may they be expanded and yet still enjoy a broad consensus? This means annunciated goals are likely to be focused, limited and specific: expanding Jewish education; enhancing financial security for Jewish institutions; establishing a modus vivendi for the Kotel[1]. Beyond specific goals, what would be necessary to sustain an imagined future in which the goals we have articulated could be achieved?

Fleshing out this vision is hard work but worth doing. To get participants beyond their usual talking points reduces the potential for later misunderstanding. Collective imagining also creates a shared experience, a first step in developing a process for discussion and a network of connection. In the present, we fight. But we are all travelers to the unfamiliar country of the future and need the help of each other to understand what it can look like.

This difficult discussion requires no more than an agreed list of such factors. Interests, assumptions, and preferences should not be discarded or hammered into more convenient form. No one can predict what course the future will take. Participants should be made to feel involved and their views respected because they may hold part of the solution. The discussion still proceeds from the shared vision.

How can we traverse from today toward that desirable future state? We must now think across time, to begin today to create those institutions that will build up and sustain the status quo of the envisioned future. Yet, these same institutions, no matter their state of transition, must also support the needs and sustain core values during each day and each step of the transition to the future. This introduces the concept of path dependence. There are myriad pathways that may bring us to the future chronologically. Only some will be well-suited to supporting a new status quo that equates with our vision. Choice of path will determine outcomes to a great extent.

This is a daunting realization, but the concept of adaptiveness allays some concerns. The passage from the present to the future horizon may prove turbulent due to unforeseeable factors, both obstacles and opportunities. Of course, adaptation will be required. It is best to plan for change and to forge a plan that is deliberately designed for adaptation in the face of circumstances.

Alternative strategic concepts frame different plans for action and implementation. A strategic concept should, at this stage, be little more than the ‘Big Idea’ that might govern one or several detailed plans. A Jewish Federation might state one strategic concept as, ‘Open the Doors’: focus on unaffiliated Jews in the community by creating portals for entry into Jewish life and in support of Jewish identity formation. Another concept could be ‘Shore up Foundations’: focus activity and attention to those who constitute the core of that community’s Jewish life and in so doing ensure continuity and the strong presence of an attractive force for others.

Both examples are simple–perhaps even simplistic. Any Federation engages in activities with different focus clienteles and intended outcomes. But it is useful at first to state such strategic concepts starkly. A range of alternatives may be generated broadly and then examined in greater detail. No one’s preferred path to the envisioned future is off the table: Everyone is along for the ride. The participants are not antagonists. They instead constitute a planning team weighing merits under different conditions. They are together assembling the building blocks for adaptiveness in the face of uncertainty.

So, let’s agree not to force agreement on assumptions.

Some assumptions carry greater weight than others. Failed ‘key’ assumptions threaten the viability of the plan itself. Implicit assumptions are unvoiced and perhaps even unrecognized by the planners themselves. These are sometimes the most lethal to a plan’s viability if broken.

Participants working as a group should lay out all the plans that the strategic concepts give birth to and determine the key assumptions for each. Then, assess each assumption’s vulnerability to future developments: an economic downturn; a major war involving Israel; increasing secularization in the surrounding society; changes in tax policy; the rise of populist nationalism; decline in birth rates, etc. Different plans will have different vulnerabilities and propensities for thriving or failing in the face of challenges. Some challenges may appear far-fetched and so the vulnerability discounted. Others may appear quite realistic or would lead to grave consequences. The group will assess each and perhaps begin to consider how elements of some plans could shore up potential weak points in those that would otherwise be preferred.

This process is de-conflicting by its nature. What otherwise might be harsh criticism voiced by some intended to derail another’s plan now becomes a constructive contribution. The speaker has illuminated several more assumptions for consideration, the group’s task. (And perhaps has unintentionally raised some questions about assumptions underlying her own preferred plan.

Hybridization of important elements across different plans can now occur. Further, exposing of key assumptions’ vulnerabilities suggests what signals would give early warning of a future unfolding in an unfavorable way. If we can define signals, we can also consider three possible adaptation responses. Hedging actions are pre-planned responses — insurance policies for when a plan’s key assumptions prove incorrect. Shaping actions are active measures to create conducive conditions; Advertising is a common shaping activity. And we can build into the plan a safety valve: We will initiate one plan but will shift to an alternative under pre-agreed conditions. 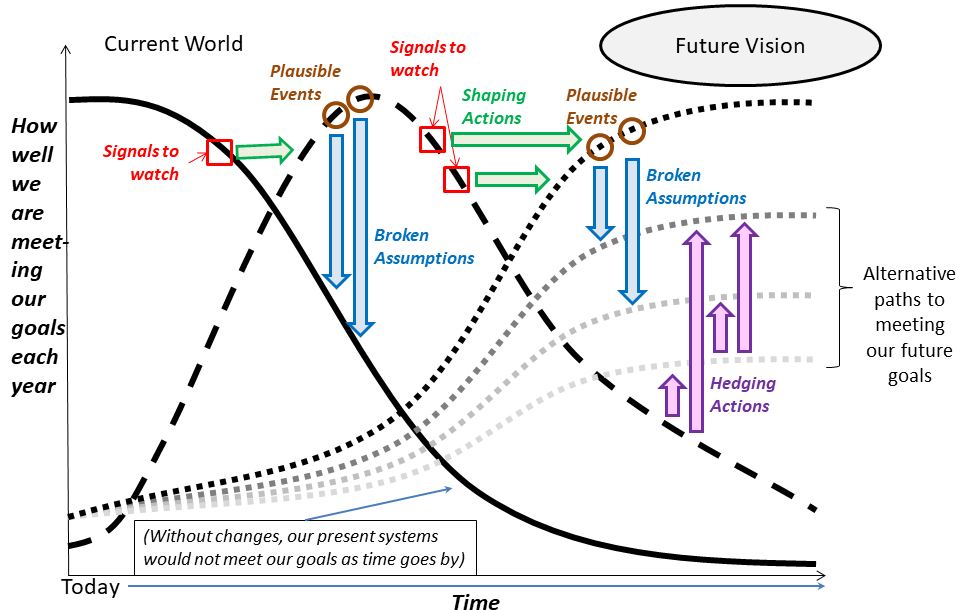 Adaptivity achieves consensus for action without forcing agreement on beliefs: I will agree to shift plans if the world changes (because I believe that those pre-agreed conditions will never arise.) And I will further agree because the conditions under which the plan will change have been pre-specified.

Uncertainty is the greatest scourge of consensus. Recognition of the potential for surprise and preparing for it reduces the anxiety of agreement to a plan. Paradoxically, openly accepting uncertainty and talking about its implications might enable the Jewish people to hold the difficult conversations upon which its future course depends.

[1] The caveat about parties concluding that they are better off working together is important. If some believe they are sufficiently enabled to bring about the outcomes they seek, the basis for collaboration and negotiation is fragile.