Measuring the Politicization of Israel in Congress 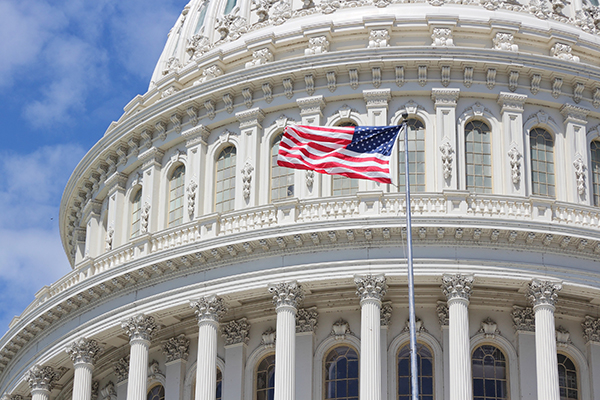 Since its founding, Israel has strived to maintain bipartisan support from the body that acts as an overall expression of the US-Israel relationship, and which is responsible for allocating military aid to Israel: The United States Congress. But has the long-term trend toward political polarization caused Israel to lose the air of bipartisanship and emerge as another overly politicized, wedge issue in American politics like abortion and gun control? If bipartisan congressional support for Israel is a pillar of a strong US-Israel relationship and if politicization erodes bipartisanship, knowing the extent to which Israel is politicized by members of Congress is a useful metric in assessing the strength of the US-Israel relationship.

While previous studies, such as those by Cavari (2013) and Cavari & Nyer (2014) measured political polarization through public opinion surveys and congressional actions, this study measures the politicization of Israel in Congress through an analysis of tweets made by members of the House and Senate over the past decade. Politicization of Israel is used here to describe the situation in which Israel is mentioned in combination with a reference to a specific political party, an individual who symbolizes the party, or a highly charged term that is used, often negatively, to refer to a political party. Although the methodology used here differs from that of previous studies, the findings ultimately concur.

The study was executed by collecting the Twitter timelines of all current and former members of Congress from the 112th session (2011) until January 2022. By 2011, Twitter had become a popular mode of communication, widely adopted by the American political class, with roughly 90% of members of Congress using it. In total, the collection includes over 2.5 million tweets, from 407 Democrats, 472 Republicans, and 7 independent members of Congress.

To determine whether a tweet included some form politicization, the text of each tweet was analyzed through a form of sentiment analysis to determine if it contained keywords and names that are highly associated with either the Republican or Democratic Parties. This process enables the identification of tweets about Israel that are political in nature. As an example, the following is a tweet about Israel made by Senator Ted Cruz (R-TX) on May 21, 2021:

“As our friend and ally is being attacked, we should be standing up unequivocally with Israel. Instead, Bernie Sanders and AOC are trying to prevent Israel from defending itself.” 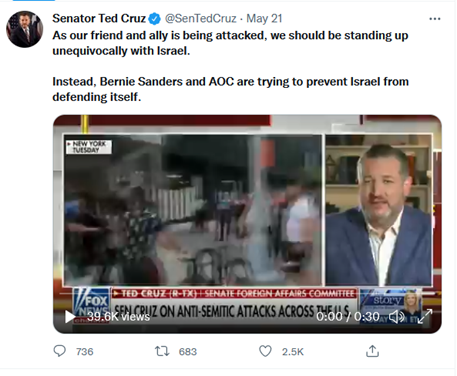 By contrast, on the same day, one of Cruz’s Republican colleagues in the House, Congressman Fred Keller (R-PA), tweeted:

“Proud to support various legislative initiatives this week to reaffirm my commitment to Israel. Hesitating to support Israel at this critical juncture not only jeopardizes its security—it sends a dangerous message to America’s allies around the globe.” 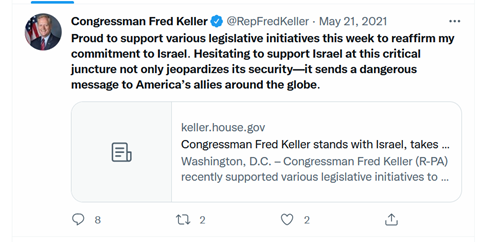 Since this tweet by Keller does not mention any keywords associated with either political party, it is not considered by the analysis to be politicized.

Among the tweets that do not mention Israel, 9.6% reference the Democratic Party and 9.1% reference the Republican Party. Of the tweets that mention Israel, 13.9% mention the Democratic Party and 10.5% the Republican Party. This shows that overall, tweets about Israel tend to make more reference to politics than tweets not about Israel, although not to a large extent. However, when comparing the two most recent sessions of congress (116th and 117th) with the previous sessions (112th to 115th) there is a dramatic increase in the percent of tweets about Israel that mention the political parties. Tweets mentioning the Democratic Party and Israel increased from 7.0% to 19.9% and tweets mentioning the Republican Party and Israel increased from 4.2% to 16.0%. This increase in political tweets was not observed to the same extent in tweets that do not mention Israel.[i] This finding indicates that tweets about Israel are becoming increasingly politicized. 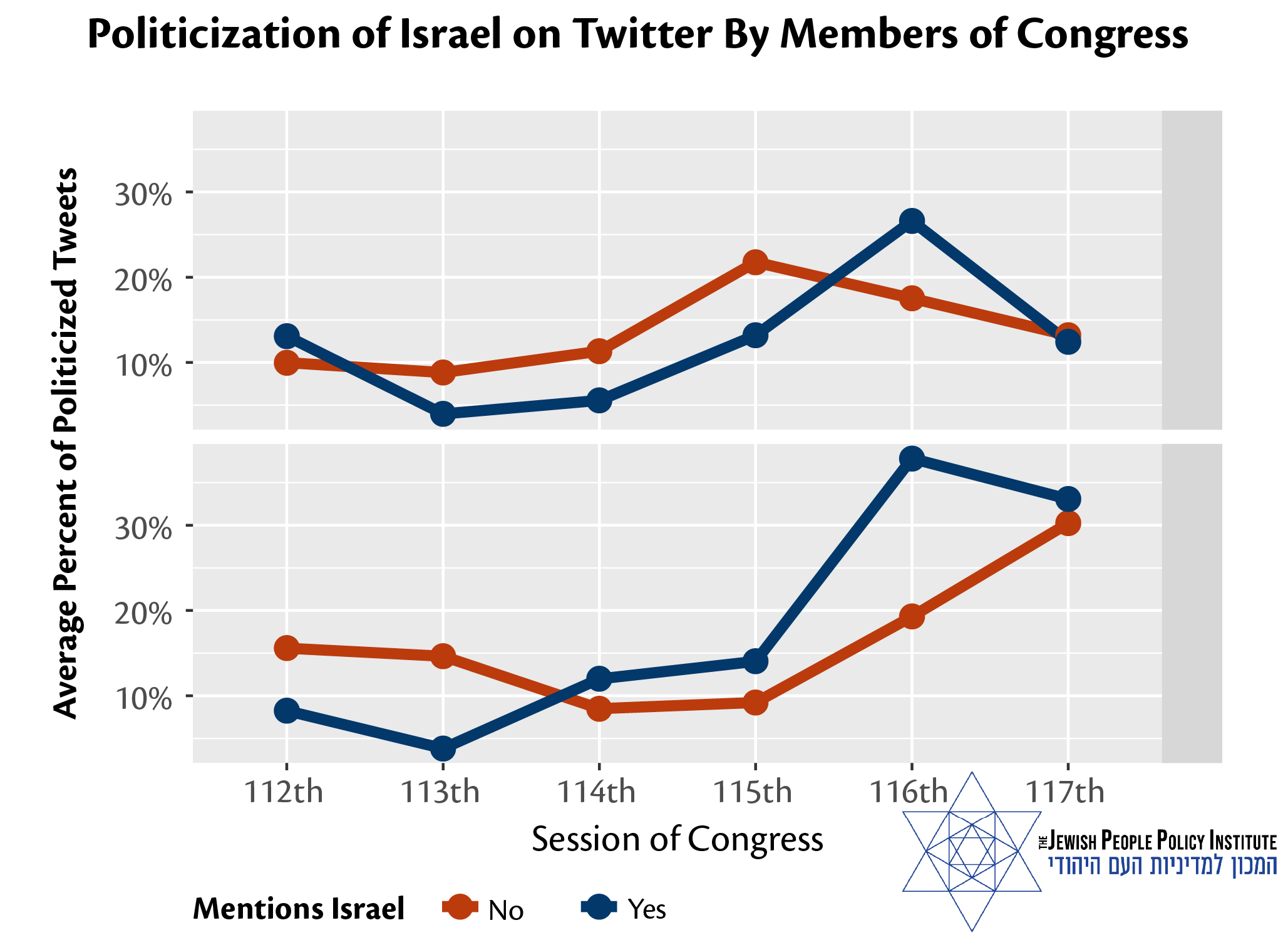 In all sessions of Congress except for the previous session, Democrats tweeted more about politics when they were not discussing Israel. However, during the 116th session of Congress, Democrat’s tweets about Israel were more political than their other tweets. This can be explained by the fact that congressional Democrats began accusing Trump and Republicans of politicizing Israel. They argued, as exemplified in the tweets below, that then Israeli Prime Minister Benjamin Netanyahu and President Donald Trump were determined to help each other politically and that their decisions involving the US-Israel relationship were not in the best interest of their respective countries. Furthermore, the August 2019 incident of Israel denying entry permits to Democratic Congresswomen Rashida Tlaib and Ilhan Omar sparked a major backlash among Democrats, who took to Twitter in outrage. 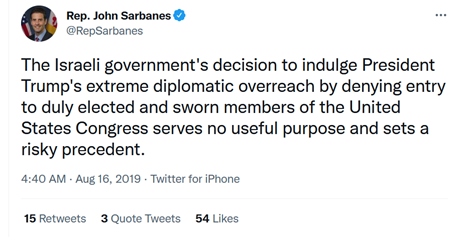 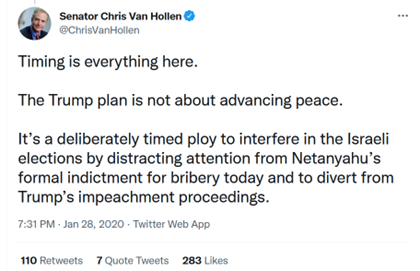 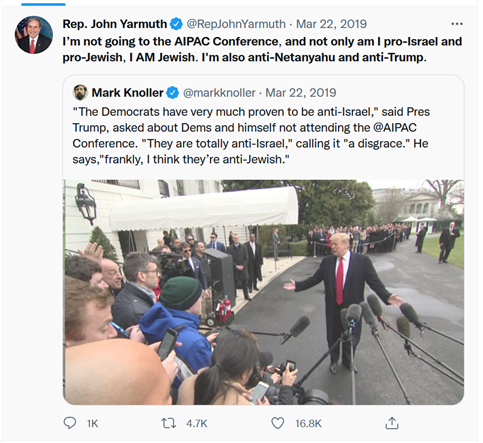 One contributing factor for the spike in Republican Tweets about Israel and Democrats was the May 2021 Israel-Gaza conflict which created a high volume of congressional tweets (see timeline below). During the conflict, a group of 14 House Democrats led by Rep. Alexandria Ocasio-Cortez (D-NY) attempted unsuccessfully to block a US arms sale of $735 million of weapons to Israel which the Biden administration announced days before the outbreak of the conflict. Although the attempt was mostly symbolic and did not have the support of Democratic leaders, congressional Republicans jumped at the opportunity to castigate the entire Democratic party as unsupportive of Israel. 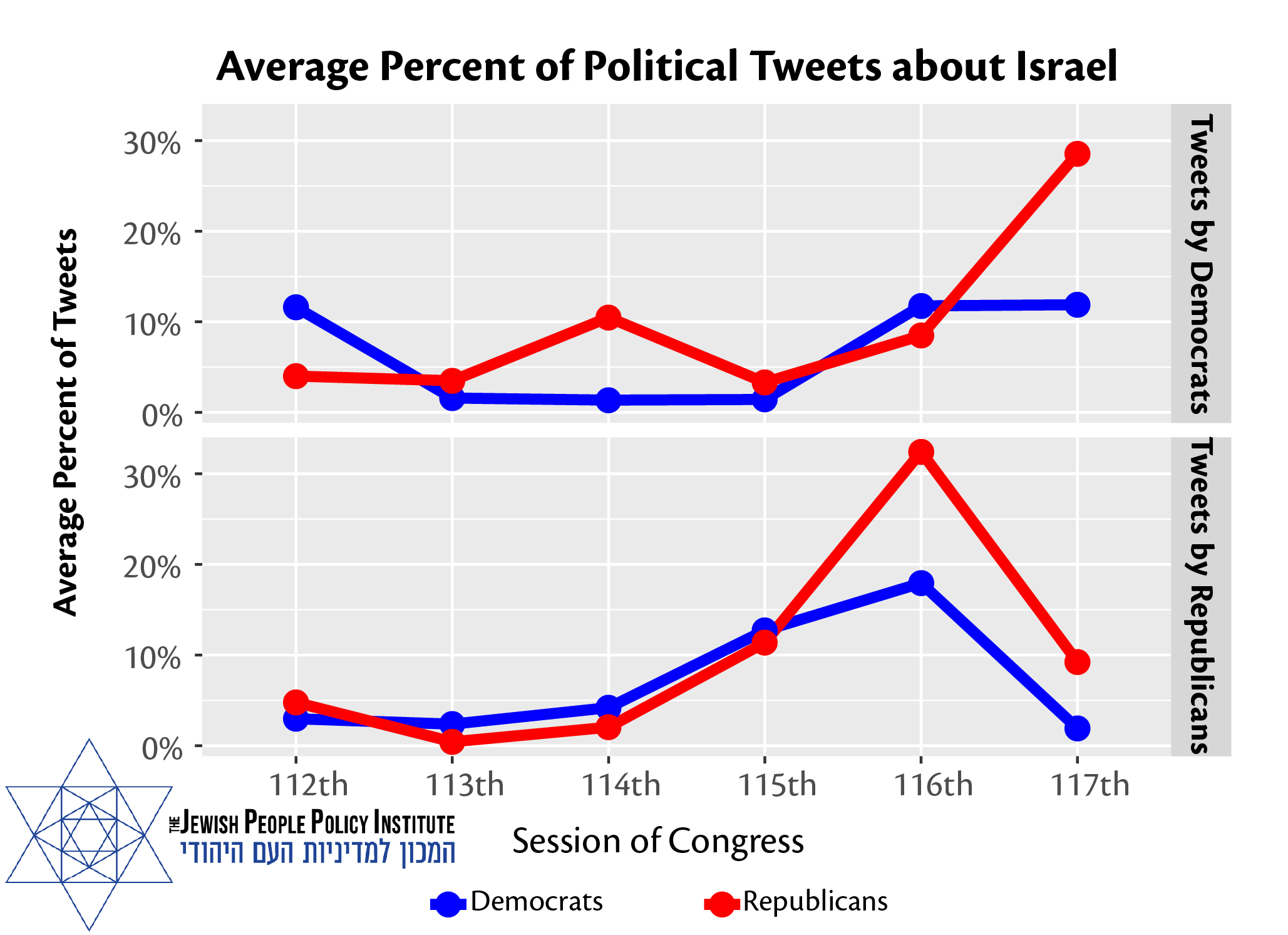 If congressional Democrats and Republicans were engaged in the same conversation on Twitter, reacting to the day’s events and debating the same issues, one would expect to find similar patterns in their choice of words and topics. For example, if there was a snowstorm in DC around the Capital building and members of Congress inside were tweeting about the weather, you would expect that the percent of tweets mentioning snow would be roughly the same among Democrats and Republicans. The same should be true of Tweets about Israel. If there is a discussion on Twitter about Israel among members of Congress, as part of that discussion you would not expect the percent of Republicans referring to Democrats and Israel to be considerably greater than the percent of Democrats referring to Democrats and Israel. The fact that congressional Republicans in the current session are tweeting about Israel and mentioning Democrats disproportionately relative to Democrats suggests some degree of politicization. A thorough analysis of that data indicates that indeed many Republicans in Congress are using their tweets about Israel to score political points against Democrats.

The extent to which Republicans have politicized their tweets about Israel is visualized in the boxplot below. Each dot represents a member of Congress and the percent of their Israel related tweets that mention Democrats. Almost a quarter (23%) of Congressional Republicans mention Democrats in the majority of their tweets about Israel, compared to only 8% among Democrats. On average, Republican members of Congress tweeted about Democrats in 28.5% of their Israel-related tweets, compared to only 12% among Democrats. 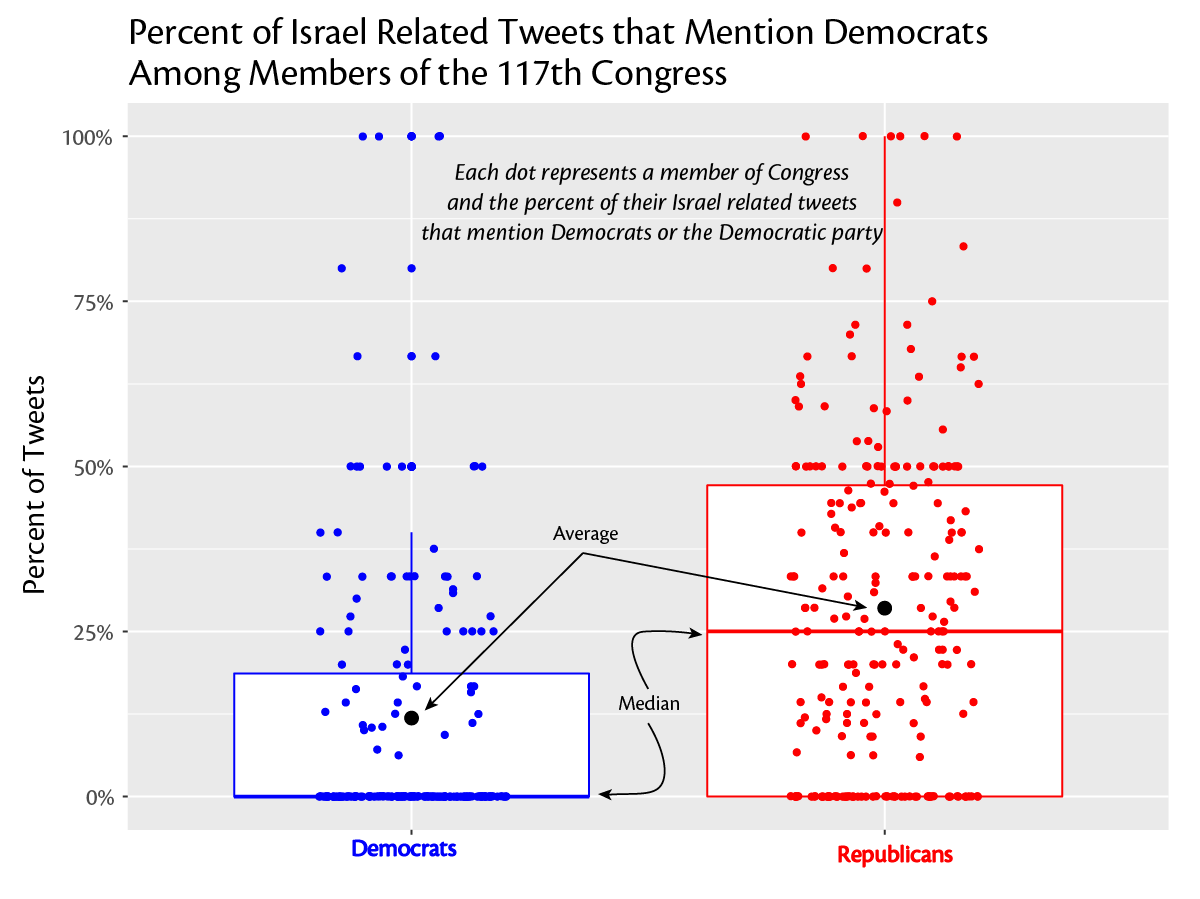 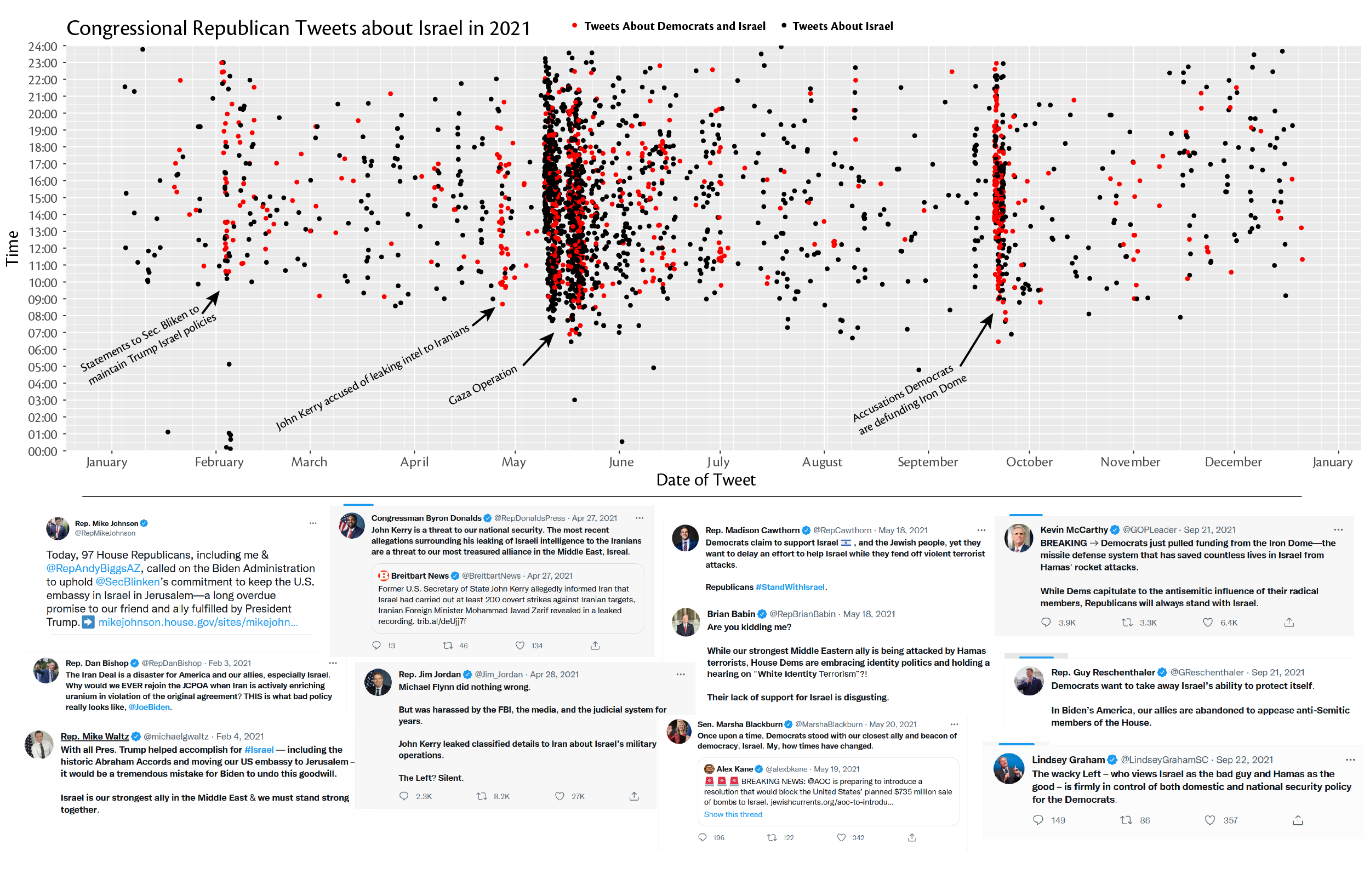 According to Pew Research Center 15% of US adults get their news from Twitter. Through their statements on Twitter, members of Congress have the ability to shape and influence how their constituents and other followers perceive the world around them, including the US-Israel relationship. In his 2013 study, Amnon Cavari shows the impact political elites have on Americans who lack “sufficient knowledge and thus rely heavily on leaders’ cues” in determining foreign policy positions regarding Israel. Based on his quantitative research, Cavari concludes: “The American electorate responds to elite change about foreign policy and about views of Israel by following the respective views of their party elites.”

In the current era of hyper partisanship and “cancel culture,” becoming associated with a specific political party or brand could be detrimental to maintaining broad-based public support. A 2019 Pew  study found that party affiliation (not race, religious attendance, education, age, or gender) was the strongest predictor of attitudes on a wide range of issues, including foreign policy.

Support for Israel is not immune from partisan considerations. The graph below from a 2018 Pew study shows the extent of the growing gap between the percent of Republicans and Democrats who sympathize with Israel more in “the dispute between Israel and the Palestinians,” with 79% of Republicans saying they sympathize more with Israel as opposed to only 27% of Democrats. 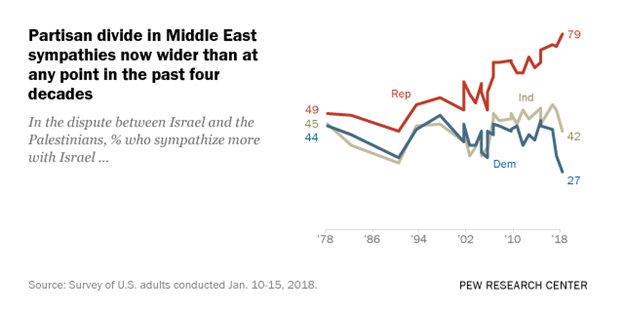 The Twitter data presented here, although coming at the issue from a different angle and with a different set of tools, complements and strengthens the two main findings of the research by Cavari and Nyer (2014), “From Bipartisanship to Dysergia: Trends in Congressional Actions Toward Israel”. They show through an analysis of congressional bills and resolution that, in recent decades, there is an increasing interest in Israel by members of Congress and that members of Congress express their support toward Israel through “uni-partisan resolutions” with intra-party, not inter-party, coordination.

If this partisan divide over Israel continues, fueled in part by politically charged statements about Israel on Twitter evidenced here, there is an increasing likelihood that Americans uninformed about Israel and who identify as Democrats will be primed to be unsupportive of Israel because they will consider it a Republican position. An even greater concern is a feedback loop in which Democrats, pandering to their base to gain political support, become increasingly critical of Israel.

Politicians, however, cannot not be expected to refrain from attacking their political opponents when they have powerful ammunition at their disposal. With support for Israel increasingly becoming integral to the Republican identity, and with a fringe group of Democrats vocal in their opposition toward Israel and the US-Israel relationship, outside intervention is needed to help reshape the narrative that the congressional relationship with Israel remains bipartisan. Those working to strengthen the US-Israel relationship need to focus attention on congressional Republicans whose relationship with Israel seems to be based on statements attacking Democrats. While Republicans might not be able to resist attacking Democrats over Israel, they should be encouraged to see Israel beyond the blinders of American politics.