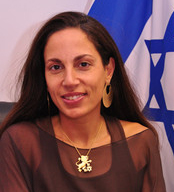 Her Jewish activism and involvement in the local Keren Hayesod campaign started in 1985 when she was only 16. Four years later, she founded Rome’s Young Leadership group. In 1999, following in her father’s footsteps, she became Chairman of Keren Hayesod Rome, and in 2005, was appointed a member of the KH Campaign Cabinet.

In 2007, she was elected to the Jewish Agency Board of Governors and was chosen chair of its Board Development Committee. Currently a member of the JAFI Executive, she also chairs the Marketing and Communications Committee and is Deputy Chair of the FRD committee.

She became a member of the KH International Executive in 2008.  In March 2009, she was elected as Chairman of the organization’s World Board of Trustees – the youngest person ever to hold KH’s top leadership position!  In November 2009, she co-chaired Keren Hayesod’s International Leadership Reunion conference in Rome, which was hosted by Prime Minister Silvio Berlusconi. In November 2010, an interview with Ms. Arbib, in which she emphasized the importance of strengthening Jewish identity and peoplehood in the younger generation, was published on the front page of The Jerusalem Post.

In October 2010, together with the World Executive of Keren Hayesod, Ms. Arbib signed a statement of cooperation with the Government of Israel declaring Keren Hayesod a partner in the National Priorities Project to rehabilitate Israel’s National Heritage Sites and strengthening the historic relationship between the State of Israel and Keren Hayesod. She served a member of the steering committee, and a speaker at the prestigious Israeli Presidential Conference, Facing Tomorrow, most recently held in Jerusalem in June 2013, under the auspices of President Shimon Peres.
Yohanna and her husband, orthopedic surgeon, Prof. Dario Perugia, have three daughters: Rebecca, 14, Noa Rakel 12 , and Yasmina Leah, 10.