A new report by the Jewish People Policy Institute “Exploring the Jewish Spectrum in a Time of Fluid Identity” analyzes the changing Jewish community and sets forth concerted recommendations which can serve as points of departure for leadership deliberation. Recommendations include that Jewish communal groups work to strengthen the sense of “Jewish Peoplehood” among individuals from mixed Jewish/non-Jewish families and those affiliated closely with Judaism. The study also suggests that should the government of Israel reconsider its Law of Return, in times of mass migration and internal pressures, it would likely be supported by the engaged Jewish community.

These recommendations are included in JPPI’s 3rd report on the Structured Jewish World Dialogue, a systematic discourse that took place in 49 seminars worldwide on issues that are at the core of the collective interests of the Jewish people globally.

Focused on exploring Jewish identity and discussing how different streams approach Judaism the Jewish World Dialogue was co-headed for the first time by an Israeli JPPI Senior Fellow, Shmuel Rosner, in tandem with an American Senior Fellow, John Ruskay, representing the two largest Jewish communities in the world.

One of the main recommendations that were gleaned through the year-long dialogue process was the need to strengthen the sense of Jewish peoplehood among all members of the community, even those that are not Jewish but are intimately involved with the Jewish community for various reasons. This is especially important for Jews who do not instinctively feel that kind of connection, including some “Jews by choice,” distant Jews, mixed families, partial Jews, and non-Jews who affiliate with Judaism. This is in light of the growing complexity in defining Jewishness as a result of fragmentation, secularization and integration among Jews worldwide. The report calls on Jewish leadership to consider ways of acknowledging those who have “cast their lot with the Jewish people in terms of behavior and self-identity.”

Dialogue participants believe that culture and peoplehood are the most significant aspect of Judaism – more than religion and ancestry. This stands in contrast to the views of those who think that Judaism today is more a personal expression than a tribal affiliation. Therefore, they value caring for other Jews more than keeping the laws of the Torah.

“In recent years, there has been a broad recognition among North American Jewish communal leadership that the nature of American Jewish identity is, to quote Bob Dylan, “rapidly changing.”  Whereas Jewish identity was previously defined by ancestry and biology – there are now growing segments of those who actively participate in Jewish life who are self-identified Jews, intermarried, or partial Jews. The past decades, most major Jewish organization action have asserted that the Jewish community – synagogues, community centers, Hillel, camps, etc. – should welcome all who want to participate in Jewish life. In this study, specific recommendations are presented how the broad stance of “welcoming and inclusiveness” – overwhelmingly affirmed in 49 leadership seminars conducted throughout the Jewish world – can be more effectively actualized.

Recommendations included challenging leadership both in Israel and beyond to go far further in developing public language which can reflect the communal consensus to be welcoming and inclusive; to support new efforts to prepare Jewish volunteer and professional leadership for this new challenge; and encourages leadership to more aggressively convene Jewish groups across the spectrum so all can become more knowledgeable and sensitive about how these issues are understood in different sectors of the Jewish world,” said John Ruskay.

While recognizing that religious denominations will continue to set their own standards for life cycle and other events, leadership seminars strongly endorsed the general posture of being welcoming to all who seek to participate in Jewish life. The over 600 leaders also affirmed the desire to maintain selective communal norms which would affirm the more traditional standards. For example, the leadership almost universally wanted the professional head of North American federations to continue to be Jewish by traditional (aka halachic) standards.

Another key recommendation focuses on Israel’s unique Law of Return. The report suggests, given cultural and demographic developments in the Jewish world, whether Israel might consider changes in the criteria governing the Law of Return.

“This recommendation does not mean that Israel needs to rush into debates about possible modification of the Law of Return. History teaches that such attempts at change often result in bitter debate, and with unintended consequences. However, as the meaning of Jewishness changes, and as the boundaries of the Jewish people are being redrawn by Jews and non-Jews all over the world, it may be necessary to modify the Law, and if such need arises as a result of growing demand for immigration or growing pressures within Israel against the current criteria, it is worth noting that world Jewry would not necessarily be against it,” said Shmuel Rosner. 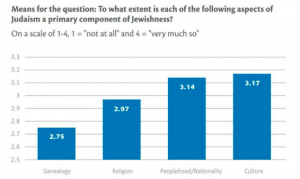 Another strong finding relates to the precipitous decline of rabbinic authority. Most Jews surveyed do not believe rabbis should decide “Who is a Jew.” Self-definition and community were by far the front-running choices as who should decide on an individual’s Jewishness among survey participants. Less than one-quarter of participants believe rabbis should have such power and only a small fraction believe that Israel should have any decision-making power regarding this issue.

The full report is available here.