JPPI’s 2017 Global Jewish Dialogue on Jerusalem and the Jewish People offers data that explains why the Jewish world uses the word “betrayal” in reaction to recent Israeli government decisions freezing the Kotel compromise and initiating a new law on conversion.[1]

One could assert that policy input from Diaspora Jews has a place in decisions Israel takes that impact Jews irrespective of where they live. The undergirding assumption of the 2017 Dialogue (as it has been is all three previous JPPI Dialogues) is that Israel ought to consider the views of Diaspora Jews on various subjects. Dialogue participants have strongly seconded this assumption. They believe that as the political and the cultural future of Jerusalem is shaped, whether by the government of Israel or by the Mayor of Jerusalem, Diaspora Jews’ concerns should be heard and considered. There is more than one justification for this notion, as JPPI argued in 2014 in the final report on its first Dialogue, which considered Israel character as a Jewish and democratic state:

Having established that all Jews should have a say in planning Israel’s future,[3] questions about their exact role, and the areas in which they could expect to influence Israeli policies and decisions remain. In previous Dialogues most participants have differentiated between policies concerning political-security questions (such as peace arrangements  with the Palestinians) and policies addressing cultural-religious issues (such as how progressive Jews are accommodated at the Kotel). When it comes to Jerusalem, these questions are not always easily separated (is the future of Temple Mount a political or a cultural-religious question?). But Dialogue participants still seem to differentiate between these two areas as we will later show.

JPPI Dialogue participants are highly engaged Jews, and Jews in communal leadership positions from around the world. A vast majority of them frequently visit Israel, and have a strong connection to the country. A survey that all 530 participants were asked to answer taught us that even though they live outside of Israel they still perceive Jerusalem as a “home.” They see it as home not only in the sense of feeling at home in the city, but also in the sense of deep emotional attachment, and hence they ought to have a say as its political and cultural future is shaped. Only 16 percent of Dialogue participants believe that Israel ought to determine Jerusalem’s political future without regard to the views of world Jewry. Only 11 percent believe that Israel ought to determine Jerusalem’s political future without considering  the perspectives of world Jewry.

JPPI proposed three possible arguments for Diaspora influence on the future of the city: 1.) Because it might affect their lives in the Diaspora; 2.) Because Jerusalem is holy to all Jews; 3.) Because Israel wants to keep the support of world Jewry. In essence,  these three arguments can be described as follows: one rests on the self-interest of Diaspora Jews, one on the self-interest of Israel, and one on the partnership between Jewish communities. When it comes to Jerusalem’s political future as well as its cultural future, the choice of the plurality of participants was the partnership argument. 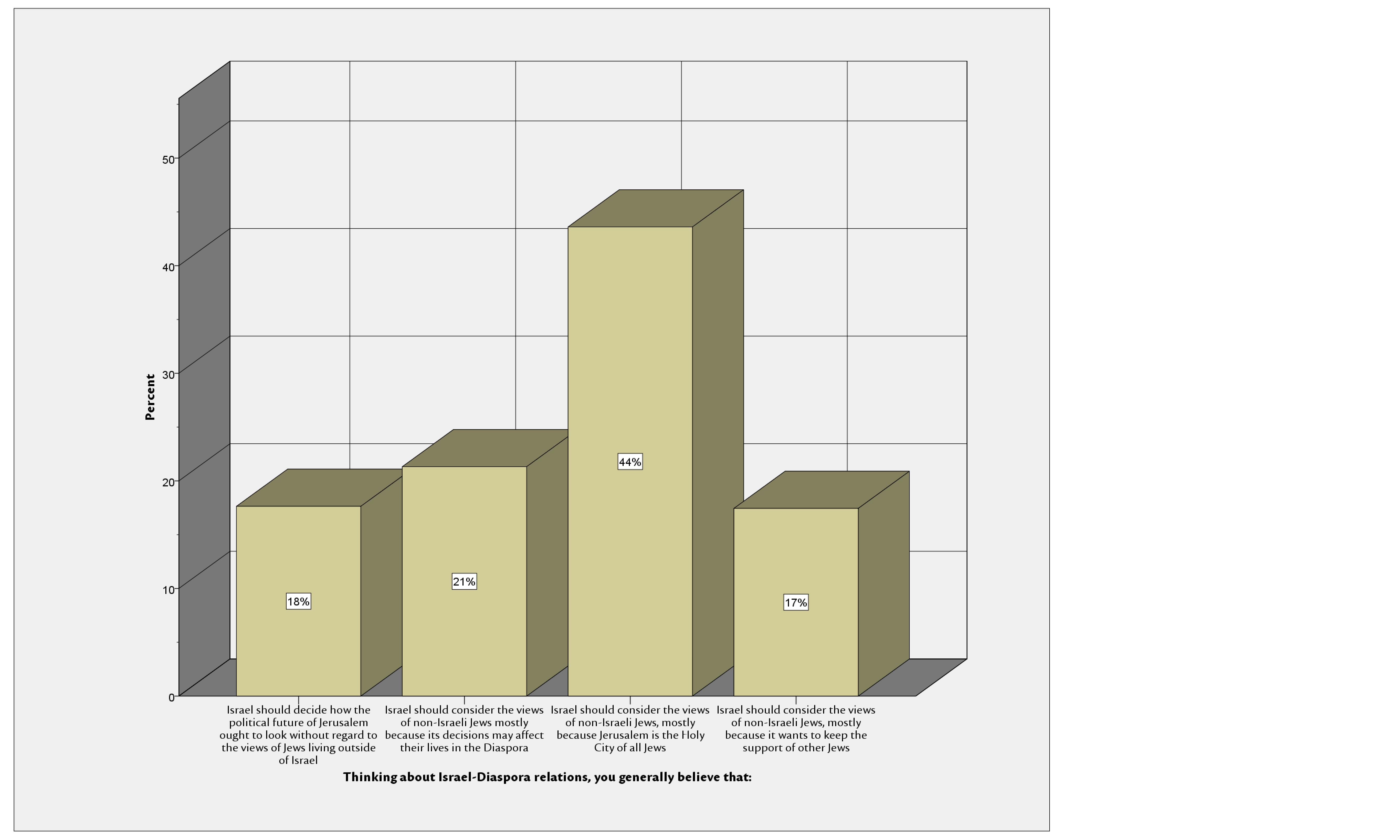 Jerusalem is not the first topic JPPI has utilized in trying to assess the extent to which non-Israeli Jews want to be consulted or involved in decisions made by Israel. Two years ago, participants in the Dialogue: Jewish Values and the Use of Force by Israel in Armed Conflict were asked a similar question, as was the case last year as part of the Dialogue: The Jewish Spectrum in Time of Fluid Identity.

Here is a table comparing the answers to all four (one each in 2015 and 2016, two in 2017) questions: First, it clearly shows that Diaspora Jews want to be considered in decisions made by Israel. Second, it also shows that the more the question concerns “Jewish” themes the more inclined s/he was to want Israel to consider Diaspora views. Thus, the expectation that Diaspora viewpoints be considered was higher when determining who is considered Jewish in Israel than it was with respect to Israeli decisions to go to war. The expectation that Diaspora perspectives be considered in shaping the cultural future of Jerusalem was higher than in shaping its political future.

Three years of asking a very similar question also provides us with an opportunity to conclude with confidence, that world Jewry expects Israel to consider its views less out of pragmatic concerns and more because of the sense of partnership. Two of the options on the menu in all three years were pragmatic concerns: Israel’s decisions can impact Diaspora Jews, and Israel’s decisions could  affect Jewish support for Israel. One option tends to focus on the notion of partnership. All Jews have the city, all Jews define Jewish values, all Jews define Jewishness – and hence all Jews should be taken into account as Israel makes its decisions.

As the table above shows, when it comes to armed conflict – an issue less instinctively associated with Jewishness – Dialogue participants opted to mention practical reasons to consult with them (and about a third of them did not think Israel should consider their views at all). But the more the issue feels “Jewish,” the clearer the tilt toward an assumed partnership. Fifty-one percent for deciding the cultural future of Jerusalem, 54 percent for determining who is considered Jewish in Israel.

As we consider the sense of crisis in Israel-Diaspora relations following the decisions by Israel’s cabinet to freeze the Kotel compromise and support a change in the laws governing conversions in Israel, the finding we presented here can explain a lot. Most of the many Jews who protested the Kotel decision do not come to the Kotel on a daily or a weekly basis (they do not live in Israel, so they can’t even if they wanted to). All of the Jews in the diaspora protesting against a change to the laws governing conversion had no immediate personal or communal stake in this legislation. Nonetheless, more than a few Jews feel betrayed by the government of Israel. Diaspora Jewish leadership “feels betrayed, and with good reason,” wrote columnist Gary Rosenblatt.[4] Rabbi Rick Jacobs, President of the Union for Reform Judaism, stated: “The decision cannot be seen as anything other than a betrayal.” Rabbi Laura Janner-Klausner (Reform) and Rabbi Danny Rich (Liberal Judaism) stated, on behalf of Britain’s Alliance for Progressive Judaism, that the decision is a “betrayal of Israeli and Diaspora Jewry.”[5]

“Betrayal” is the expression one expects when a sense of partnership is suddenly breached. This sense has clearly presented itself in the last three JPPI Global Jewish Dialogues.

[1]  This is an early release of one chapter from the report on JPPI’s 2017 not Jerusalem and the Jewish People,  Unity and Division. The full report is expected at the end of the summer. A summary report, which was presented to the Mayor of Jerusalem a few weeks ago, is posted here: jppi.org.il/new/en/article/jersualemdialogue/#.WVTIWxN97Vo

[3] Some Jews do not wait for Israel’s permission when it comes to trying to influence the future of Jerusalem. This was visible at certain points in negotiations between Israel and the Palestinians. See: Whose Jerusalem Is It, Anyway?, Shmuel Rosner, Slate, February 28, 2008.