Calls on Government to develop and act on the basis of an orderly strategic plan to cultivate relations with Diaspora Jewry, and to address the consequences of rapid change, including trends of distancing from Israel and Jewish identity.

Jerusalem, June 26, 2022…The leadership of the Jewish People Policy Institute (JPPI) – Amb. Dennis Ross, Co-Chair, and Prof. Yedidia Stern, President – presented an executive summary of the Institute’s 2022 Annual Assessment of the Situation and Dynamics of the Jewish People in the weekly cabinet meeting of the Israeli government held this morning.

Ross, a former senior adviser to three U.S. presidents from both parties who was responsible for the political process in the Middle East reviewed the map of geopolitical challenges and opportunities. Ross made it clear that Russia’s invasion of Ukraine had quieted criticism of Israel within the Democratic Party, voices that used to portray the Israeli-Palestinian conflict as the main threat to world peace. However, Ross warned that taking the two-state formula off the table could lead to a Palestinian claim to equal rights within one state. Such a claim would find a sympathetic ear within the American electorate in the United States.

During the discussion, Prof. Stern, JPPI’s president, outlined the main points of the report and said: “The core beliefs and emotional ties that “made us one” are weakening dramatically, while questions from the ideological and identity fringes are growing within Israel and outside it.” Stern emphasized the need to prepare a comprehensive strategic plan that would give meaning to the 2018 Nation-State Law, which imposes on the State of Israel an obligation to act to cultivate Jewish identity and affinity for Israel in the Diaspora.

The government ministers who referred to JPPI’s report said that Israeli governments have not paid enough attention to the challenges facing the Jewish people – especially the preservation of Jewish identity and the sense of peoplehood in both Israel and the Diaspora, cohesion between the Jewish communities of Israel and abroad, and the consequences of escalating antisemitism worldwide, and its negative impact on identification with Judaism and Israel.

The Minister of Public Security, Omer Bar-Lev, commented that the Institute’s Annual Assessment shows a decline in many indicators of the situation of the Jewish people. “We as a government fail to deal with the Jewish world, we do not take enough responsibility for the well-being of the Jewish people”.

Yifat Shasha-Biton, the Minister of Education, joined by Yaakov Hagoel, the acting Chairman of the Jewish Agency, called for the preparation of a plan for improving Jewish education in the Diaspora. The Minister of Diaspora Affairs, Nachman Shai, pointed out the necessity of establishing a coherent system for combatting antisemitism and called on the government to take active responsibility for enhancing the well-being of Diaspora Jews.Another major issue discussed at the Cabinet meeting focused on the younger generation of U.S. Jews and the rapid adoption of the progressive agenda by the Democratic base. While 71% of U.S. Jews are Democrats and the vast majority, 70%, support the State of Israel, among young Democrats that support is declining, only 48% support Israel.

According to Stern, “Distancing from Israel is becoming such a significant issue among young Jews on colleges campuses that Zionism has become a very problematic term in some U.S. elite universities. Their Judaism is bereft of religious or national content and is based solely on a cultural connection. Only a third of young Jews under 30, say that it is very important that their grandchildren be Jews. The overall Diaspora picture includes three troubling aspects: a reduction and dilution of non-religious Jewish identity in the Diaspora, a diminution of the pro-Israel resolve among the next generation of Jews, and increased polarization – political, religious, cultural – within American Jewry.

In the field of geopolitics, the report points to a certain weakening in 2021 – geopolitical uncertainty has intensified in the past year, affecting Israel and the Jewish people. Threats to Israel remain the same and there is no turning point on the horizon that promises a solution to its fundamental strategic problems. The situation could erupt into violent crisis on several fronts.Relations with the United States are intertwined with issues that may turn out to be hotbeds of controversy (Iran, the Palestinians, Ukraine, relations with Russia and China). Israel’s ability to navigate these waters is politically limited.

JPPI calls for a deeper dialogue with Jewish Democrats to mobilize their assistance in advancing Israel’s positions vis-à-vis Iran, and to rekindle American Jewry’s interest in the challenges facing Israel. Their loyalty to President Biden is clear (63% support among Jews, much higher than that of the general public), and, therefore, their action with respect to the administration and Congress could be helpful in advancing overlapping policy elements between Israeli and American interests.

Regarding the Abraham Accords, which have changed the face of the Middle East, JPPI researchers called on the government to act in its own right and to mobilize world Jewry to expand and deepen cooperation made possible by the agreements. They have tightened the “moderate alliance” of countries striving for regional stability, opened up opportunities for economic, technological, scientific, and cultural cooperation – above all, they have strengthened Israel’s public legitimacy in the Arab world.

Prof. Stern noted the responsibility of the State of Israel to deal with these crucial strategic issues: “We have a constitutional obligation under Article 6 of the 2018 Nation-State Law, which states, “The State shall act in the Diaspora to strengthen the affinity between the State and members of the Jewish People.” Along with steps taken by the Israeli government to further strengthen the agreements and their significance, and the constant striving to expand the circle, especially the addition of Saudi Arabia, Jewish communities around the world should also work to reinforce the agreements.

Yaakov Hagoel, Chairman of the World Zionist Organization and Acting Chairman of the Jewish Agency said: “The Jewish People Policy Institute’s Annual Assessment presented at the Cabinet meeting today addresses a number of important challenges – antisemitism, the unity of the Jewish people, and aliyah. WZO has 250 teachers deployed around the world, and the goal is reach 1,000. A wide and significant distribution of emissary-teachers around the globe well help in the important activity facing the challenges of the Jewish people in Israel and abroad.” 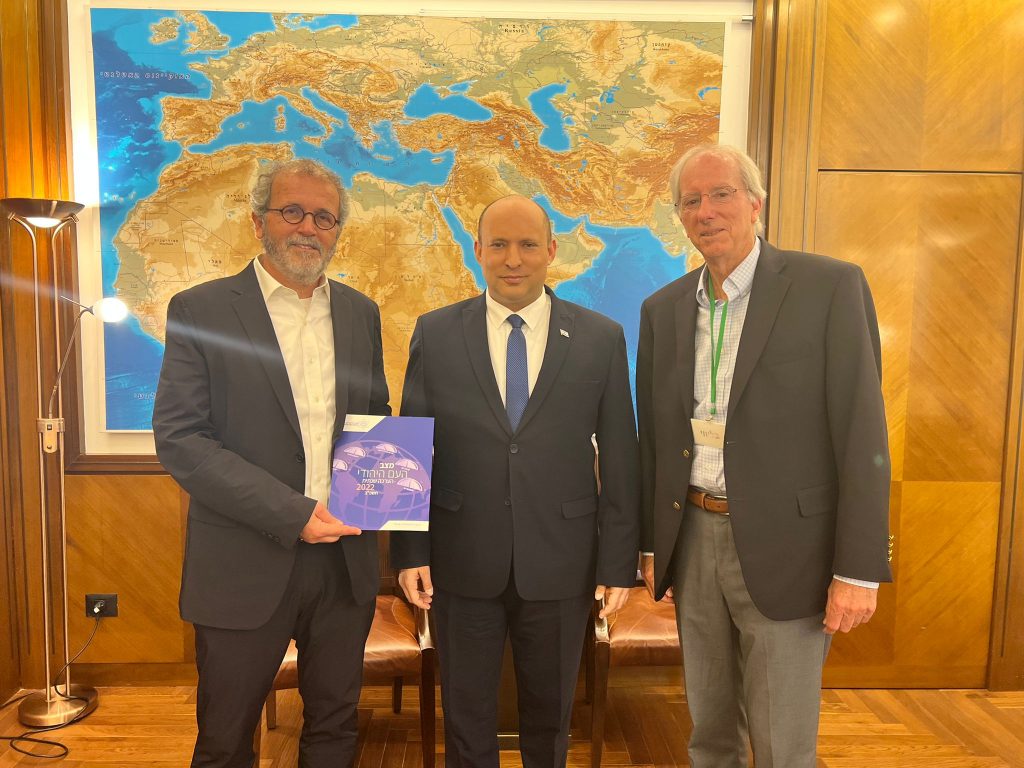