Presentation of the 2019 Annual Assessment Executive Summary to Israeli Cabinet 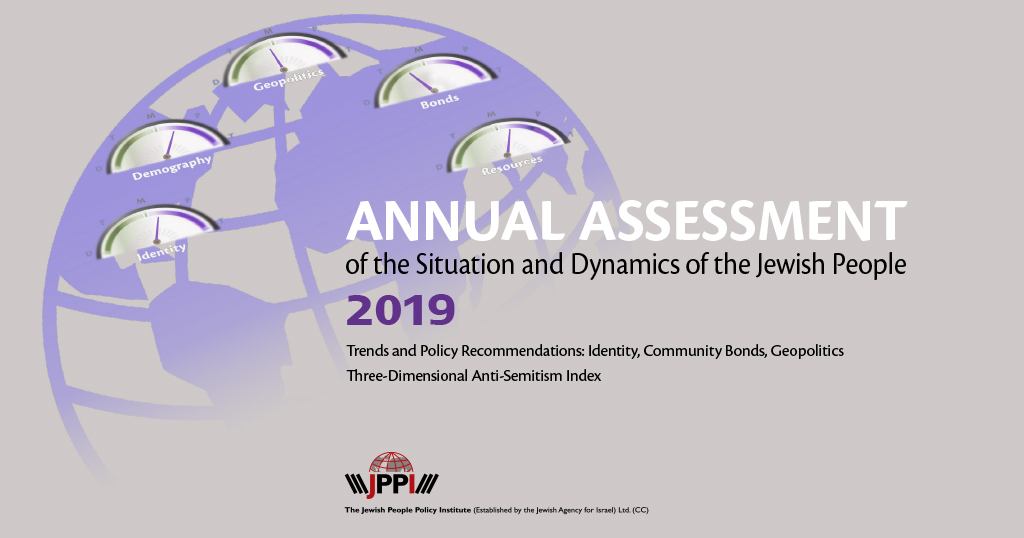 Jerusalem, June 30, 2019…The Jewish People Policy Institute (JPPI) presented the Israeli Cabinet with an executive summary of its 2019 Annual Assessment of the Situation and Dynamics of the Jewish People today.

Ambassador Dennis Ross, Co-Chair of the Institute, Avinoam Bar-Yosef, President of the Institute, and senior fellows Dr. Dov Maimon and Dr. Inbal Hakman presented the findings and policy recommendations contained in the annual report submitted to the Prime Minister and Cabinet Ministers.

Prime Minister Netanyahu and his Cabinet discussed the JPPI findings and recommendations for one-and one-half hours, an hour longer than scheduled, indicating deep interest in the subject matter of the Annual Assessment.

Click here for the full Executive Summary of JPPI report.

Ross, a former senior adviser to three US presidents from both parties and who oversaw the diplomatic process in the Middle East, outlined the geopolitical challenges and opportunities and spoke of data indicating a dramatic rise in anti-Semitism around the world, which he described as “the most significant trend of the past year.” He said that this trend was reflected in a drastic increase in the number and intensity of events, which reached a peak with the two shooting attacks in synagogues in the United States.

JPPI’s Annual Assessments, which examine the dynamics affecting the status of the Jewish people, have been presented to the government every year since 2004. It was led this year by Shmuel Rosner, a senior fellow at the Institute.

The heads of the Institute warned that the spread of anti-Semitic phenomena and the fact that local authorities in Europe are not doing enough to strengthen the security of the Jewish communities may lead to significant harm to Jewish communities. Some Jews are considering immigration to Israel or elsewhere, while others may give up their Jewish identity.

JPPI’s President Avinoam Bar Yosef, called on the government to set up a coordinating body to confront the growing anti-Semitism: “The Government of Israel should immediately establish a coordinating body to closely monitor the various dimensions of anti-Semitism, assess the threats and risks, and initiate action vis-à-vis other governments, communities and relevant actors in various fields. This is a strategic imperative.”

In addition, they presented the need to prepare for immigrant absorption and said that the State of Israel should focus on vocational guidance for immigrants by recognizing advanced degrees and establishing training and placement programs for immigrants to facilitate their integration into Israeli society. The integration of immigrants into the labor market in a smooth manner would also benefit the Israeli economy.

Among the geopolitical developments of the past year, Ambassador Ross noted the deepening alliance with the United States and President Trump, expressed by the administration moving its embassy to Jerusalem and recognizing Israeli sovereignty over the Golan Heights. Additional positive developments include the cooperation and coordination with Russia, especially with regard to the Syrian arena, as well as the expansion of economic relations with China.

Bar-Yosef, presented the demographic trend among the Jewish population. He noted the growth among the Orthodox communities in the United States, where this population among the younger age cohorts is already roughly 30 percent in some communities. “We can expect significant implications from the growth of the Orthodox population in the long run. Alongside strengthening relations with the Reform and Conservative denominations, the Government of Israel should encourage and support increased involvement of the Orthodox in the leadership of the Jewish communities in the Diaspora, American society and politics in order to preserve Jewish influence in the general public,” he said.

Ambassador Ross referred to President Trump’s peace initiative. According to them, the Palestinians’ rejection of the initiative and the absence of a political partner obligates the State of Israel to consider taking unilateral action that would halt the danger of deterioration into a bi-national state. At the same time, President Trump’s friendship should be leveraged in order to reexamine the possible establishment of a long-term formal strategic alliance with the United States.

However, Ross emphasized the difficult uncertainties regarding the future in the Middle East: “Expressions of sympathy and support for Israel are prominent among Republicans and the alliance with President Trump is stronger than ever, but among the Democratic camp there has been a significant drop in support for Israel and the Palestinians may choose a strategic embrace of a bi-national state asking for ‘one citizen-one vote’ which may resonate among both Democrats and Republicans. As we are at the onset of the US presidential election cycle, Israel must do all it can to maintain bi-partisan support.”

Another issue presented is the dilemma surrounding the attitude of the State of Israel to countries that support it but are perceived as hostile to the democratic ethos and do not do enough to combat anti-Semitism.

Available for interviews:lanning think tank. The mission of the Institute is to ensure the thriving of the Jewish people and the Jewish civilization by engaging in professional strategic thinking and action-oriented policy planning on issues of primary concern to world Jewry.